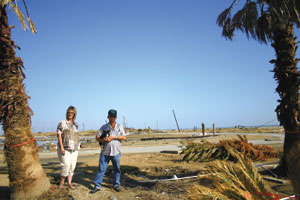 There's a sign spray-painted on the side of a ruined gas station in Hackberry that declares "linemen rule." Bucket trucks fill the roads that stretch from Louisiana Highway 27 all the way down to La. 82, and new telephone poles and power lines now dot the roadways that were impassable due to marsh grass and mud in the wake of Hurricane Rita. Highway 27 snakes through Cameron Parish's wetlands from Sulphur through Hackberry; the road ends at Holly Beach ' where bulldozers will begin to level the cratered sand at the decimated community. Swept clean of structures by 120 mile-an-hour winds, the coastal community will begin building again once the Army Corps of Engineers clears lots, and water and electricity are restored.

Loretta and Wilfred "Sonny" Meaux and their extended family own multiple businesses in the community ' Loretta's Cabins, Kajun Kabins and Grocery, Hurricane's Cabins and Meaux Seafood, as well as their own homes. When they saw Holly Beach for the first time after the storm, they were only able to identify their property by the two palm trees left standing on either side of where their front door once stood. "We never dreamed it could be like this," Loretta says. "I had a girlfriend of mine, she had no recognition of where her property began. It's like it never existed."

But the Meauxs never considered not returning to the area. "We're coming back bigger and better than ever," Loretta says. "That's what Holly Beach is about. We're going to come back in an RV, a generator and our boat," Sonny says.

But rebuilding the physical and economic infrastructure of an entire parish is a bewildering enterprise. Lower Cameron Parish, from Sabine Pass on its western edge to Grand Chenier, lost most of its structures and infrastructure ' homes, businesses, government buildings, water plants and sewer lines. The devastation is comparable to St. Bernard Parish, where nearly every home and business was flooded after Hurricane Katrina. Pete Bakersky, FEMA director of operations for Cameron Parish, says it could take two to three years for the two parishes to fully recover.

The first step for those returning to rebuild is to acquire a permit. The Cameron Parish permits office, normally located in the courthouse in the town of Cameron, moved to the Cameron Prairie Wildlife Refuge at Grand Lake, where it opened on Oct. 17. Permits officer Tammy Trahan began issuing business permits for areas located north of the Intercoastal Canal. An evacuation order keeps residents from returning south of the Intercoastal Canal, and residential permitting won't begin for another week.

Trahan is in the strange position of not knowing when she will be able to issue a permit to one of the families most in need ' her own. Her house on Little Prairie Road outside of Creole was destroyed. She is commuting to work from Sulphur, where she's living with her children. She says the shock of seeing an entire community wiped out is wearing off, but she is having difficulty planning ahead. "When the schools reopen, then I have to get my 7-year old back in school," she says. (She plans to enroll him in Sulphur.) The speculated timeline for reopening Cameron is in six months, after the clean-up takes place. "Rebuilding? I don't know," she says. "There's always the fear of another storm."

For those who want to rebuild, existing building regulations are still applicable, but new construction will change the face of coastal Louisiana. Buildings grandfathered in when FEMA guidelines were put in place in the late 1980s can only be restored to their pre-Rita elevations if storm damage is determined to be less than 50 percent of the value of the structure. According to Cameron Parish officials, there are only about 20 structures left in all of Cameron Parish that will meet that criteria. Every other building ' from the camps at Constance Beach to the banks and schools in Hackberry ' will probably have to be reconstructed from the ground up. The parish participates in the National Flood Insurance Program, an arm of FEMA, which sets elevation requirements above sea level for building in flood zones. "If they want to rebuild, they'll have to meet [existing] FEMA guidelines and elevations," Trahan says. "Some buildings need to be 3 feet in the air, some 8 or 9 feet."

This does not mean that Cameron will be rebuilt as a town on pilings. Property lines and elevations have to be determined by surveyors, then the address of the site is checked against FEMA flood maps, which dictate the height of the lowest horizontal spot of the new structure. The 1930s-era Cameron courthouse, the only building to survive hurricanes Audrey and Rita virtually intact, was built 9 feet above sea level, which helped it survive the 15-20 foot storm surge. "The reinforced concrete footings were all poured at the same time," Cameron Parish administrator Tina Horn notes. "That's how I want to build my house, if I can afford it."

While the courthouse is the envy of every Cameron resident, a few other buildings rode out the storm with varying degrees of success. A recently built Family Dollar store, raised on a dirt pad under the slab, meets current FEMA standards. Like every other building in Cameron it was inundated with water and mud, but the structure survived. Further to the west, houses at Little Florida Beach, built on 17-foot pilings and protected by a solid sand dune as well as beach vegetation, look virtually unscathed. Varying wind bands within the storm may account for one building's survival and another's collapse, but most parish officials credit FEMA's elevation guidelines for reducing wind and water damage in recently constructed homes and buildings.

After the hurricanes destroyed hundreds of thousands of houses, meetings to discuss environment and building codes cropped up across the state. LSU's Sea Grant program hosted a forum two weeks ago to raise issues such as wetlands loss, the state's reliance on levees and the need for houses designed to mitigate water damage. Last week, Crowley State Rep. Gil Pinac introduced testimony in the House Commerce Committee calling for a uniform building code. LSU Hurricane Director Mark L. Levitan agreed, recommending that the state adopt the International Residential Code, which would require stronger construction techniques and materials ' in turn raising the price tag for new buildings. Whether that is politically feasible, with the state and its residents financially strapped, is part of the ongoing puzzle.

Construction financing is the next hurtle in the race to rebuild. Many people in the state are still negotiating with their insurance companies or still waiting for their first meeting with insurance adjusters. Homeowner's insurance policies do not cover rising water, the source of much of the destruction from both hurricanes, leaving those without flood insurance potentially empty-handed.

Theoretically, this is where FEMA comes in. "Most people in Cameron Parish will be eligible for Small Business Administration loans to get them back on their feet," says Kim Pease, public information officer for FEMA. "SBA loans for disaster relief also apply to individuals seeking aid." It is critical, Pease says, for those eligible to fill out the SBA loan form contained in the packet given to storm victims. "Even if they don't want a loan, they have to fill out the SBA loan application. That's the gateway to getting into the system."

FEMA has yet to identify the agency through which the loan will become available. While during a disaster the SBA becomes the loan agency for the federal government (guaranteeing the loan), local banks could wind up being the loan agents. "There's going to be a time where somewhere near Cameron there's going to be disaster recovery center," Pease says. "People from different agencies will be there to give information on how the SBA loan works. Wherever it's set up, you'll be notified," he says.

Currently interest rates through the SBA for those with no credit or poor credit stand at 2.687 percent for home loans and 4 percent for business loans. Those eligible for loans from other sources can receive a 5.375 percent home loan and a 6.557 percent business loan from the SBA. An average 30-year fixed mortgage rate for a homeowner's loan quoted at www.interest.com was 5.86 percent on Oct. 20.

Homeowner's insurance and flood insurance for structures in flood zones are required as part of the loans from regular banks and SBA. According to Martin Perret, owner of Quality Plus Insurance in Lafayette, people are having a lot of difficulty getting homeowner's insurance right now. "Allstate, Travelers, Farm Bureau, State Farm are all shut down," he says. The double blow of the two hurricanes is affecting how insurance companies are defining damage. "Everybody south of I-10 is going to be in the hurricane zone," Perret says. Insurance companies are implementing hurricane deductibles, which Perret says is causing confusion. "They vary from company to company ' they all need to be on the same level playing field. There's no uniformity." Costs for homeowner's policies are significantly higher in southwest Louisiana already, because of the potential for wind damage, Perret says, and he thinks it's going to get worse.

SBA loans typically include homeowner's insurance and taxes in the monthly payment. FEMA's Pease wasn't sure if flood insurance is also included in SBA loans. If the flood insurance is mandatory, however, Pease says the federal government will cover the cost for the first three years of the loan. For parishes participating in FEMA's National Flood Insurance Program, flood insurance will be available to all homeowners. Pease says that the difference in the cost of rebuilding to meet parish flood elevation standards will also be covered under FEMA's Increased Cost of Compliance program.

"[If] your home was destroyed, you're going to rebuild some feet above the flood plane. Some additional funds are going to be available to you to pay for your increased cost," she says. Costs for building dirt pads could vary from $2,000 to $8,000, and driving piling may run as high as $5,000. But that one-time investment should lower the cost of buying flood insurance, and hopefully prevent future insurance claims from storm damage.

The Meauxs had insurance for their trailer, but not for their businesses. "Thank God we bought a new trailer and insured it," Loretta says. "We had 100 percent hurricane insurance. In Zone 2 a trailer has to be structurally built to withstand 100-mile-an-hour winds. The trailer cost almost $40,000. But a lot of people didn't have flood insurance. They can't afford it."

Living temporarily just west of Lake Charles in Carlyss, the Meauxs are anxious to see how their FEMA claims will be handled, and if they will be able to rebuild their businesses. Their rental cabins and seafood store were only covered by liability insurance, and their crab and oyster operations are shuttered for now. "Our living's on the water," Loretta says. "Oyster season was supposed to open the 15th of this month. There's no money being made out here, not a dime."