PASS THE EVOO, PLEASE
All Trynd pastry chef John Powers will tell you about his olive oil cake is that it's made with olive oil and contains no dairy products. As for the rest of the ingredients, he's not about to share those scrumptious secrets (we guessed that the batter has lemon rind in it) in this $8 treat.

Wednesday, May 11, 2011
Written by The Independent Staff 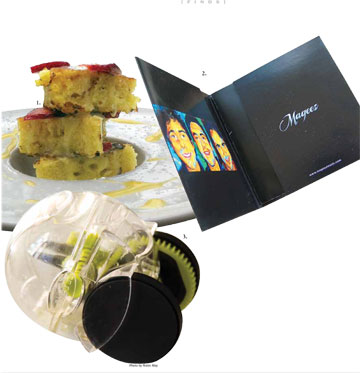 PASS THE EVOO, PLEASE
All Trynd pastry chef John Powers will tell you about his olive oil cake is that it's made with olive oil and contains no dairy products. As for the rest of the ingredients, he's not about to share those scrumptious secrets (we guessed that the batter has lemon rind in it) in this $8 treat. Its three stacked slices are enough to share; be careful, though, as the cake's light, fluffy texture will trick you into thinking you're not indulging. My guess is you are. The cake layers are glazed with a French-style lemon curd and topped with Louisiana strawberries - and it tastes nothing like olive oil. It's delish. - Leslie Turk

IT'S EASY BEING MAGEEZY
Mageez is made up of three Lafayette brothers: Bo, Ben and Michael McGehee. The album is what I call a "Sunday morning album," something you put on after you watch CBS Sunday Morning and start thinking about bacon and waffles. The sound of it is New Orleans pop music shot through the John Mayer vein. Songs like "Big Name Small City" and "Doin' Big Easy the Hard Way" talk about the brothers' adopted city with love and faith, the latter using vocals that are a tribute to Dr. John's vocal style and the light slide of piano. Two others on this debut album are "Hey Brittney" and "Gwenivere" because any album by men that doesn't sing of lost female love is unusual. Ben has been the regular piano player at Pat O'Brien's for several years. He says about the album, simply, "It's been the culmination of a lot of years of the three of us writing music together." With Bo finishing his MBA at UL Lafayette and Michael finishing his undergraduate at Belmont University in Nashville, the brothers found it easiest to record in Michael's city, although the plan is for all three to reunite in the Crescent and launch their band in earnest. - Anna Purdy

ZOOM ZOOM GARLIC
The importance of garlic to nearly every type of cuisine cannot be overstated. Here in Louisiana we rely on those jars that are sometimes tiny, sometimes big enough to hold enough garlic for the apocalypse, and always oily enough to entice BP. It's not bad at all, but there is nothing like garlic freshly released from its skin and cut up. Yet, frankly, chopping garlic can sometimes be a huge pain. Enter the Chef'n Garlic Zoom. It looks like a wee futuristic bus on two huge wheels and it minces garlic as fine as it gets. Simply peel the garlic cloves, open the chamber at the top, pop them in, then zoom it across a flat surface like a Matchbox car and shake the garlic out. The blades inside pop out and are dishwasher safe, as is the rest of the contraption. You can find it at The Kitchen Shop in Grand Coteau in both the small and large sizes. - AP