Post-Katrina documents released by Gov. Blanco's administration show that multiple offers of assistance from around the country slipped between the cracks, leaving would-be volunteers feeling shunned. 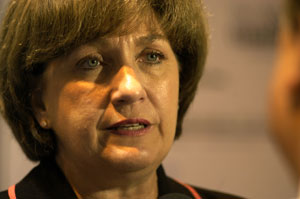 A blind man stranded in his atticâ?¦ An elderly couple with dangerously high blood pressure afraid to leave their apartment ... A dialysis patient last seen in a home off of Colapissa Streetâ?¦

After Hurricane Katrina made landfall, nearly every governmental agency in Louisiana received these kind of frantic e-mails or phone calls, mostly from family members concerned about their loved ones. The requests were overwhelming during the first few days, and there was no tracking system in place to handle the desperate appeals.

Then Dr. Ramesh Kolluru contacted the state and offered to build an electronic database with his UL Lafayette graduate students. Only two days after Katrina pushed through the state, Andy Kopplin, then the governor's chief of staff, approved the volunteer project and got it moving. As a result, the Web site, www.katrinasafe.org, became an extension of ongoing search-and-rescue efforts.

"It all moved so fast," says Kolluru. "We volunteered day and night, working nonstop, to get information up about missing persons."

But according to more than 100,000 pages of e-mails and documents recently released by the office of Gov. Kathleen Blanco, the swift response to Kolluru and his students was not the norm in the week following the Category 4 storm. The new documents were produced at the request of a congressional investigation into the government's response to the hurricane ' and they offer a vivid and shocking snapshot of an administration struggling to deal with an unparalleled natural disaster.

The voluminous pages are a public relations nightmare for Blanco and her staff, detailing everything from high-ranking officials discussing inside politics while people drowned and perished, to the mass confusion that seemed to ensnare the entire government response.

They also reveal a public hungry to help out, a group of good Samaritans who largely went overlooked.

When Katrina slammed into south Louisiana on Monday, Aug. 29, some of the levees surrounding the New Orleans region failed, and residential areas began filling with water. Rescue and evacuation efforts were a challenge, and food, water and medical supplies were running short. The heat and humidity of a Louisiana August beat down on thousands of people stranded in the Superdome and the Ernest N. Morial Convention Center, as well as on different sections of Interstate 10.

Records indicate Kopplin sent out an e-mail at 11:08 p.m. Tuesday, the day following landfall, prompting the governor's staff to contact legislators to gather as many buses as possible to help with evacuations: "Call all leges to help muster buses asap for tomorrow."

Earlier in the day, John Schwiebert, a retired school superintendent from Iowa, organized 100 buses on his own, along with drivers, and began mapping their route to Louisiana. He was determined to help. "I was surprised I even got through to anyone when I phoned," Schwiebert recalls. "I told them we were ready to go and could get there fast."

By his own estimates, the caravan needed only 16 to 20 hours to travel south and would have arrived near New Orleans no later than noon on Wednesday.

But no one ever called Schwiebert back, and the buses sat motionless. "I never heard another thing from anyone," he says. An e-mail, however, was sent out by administrative assistant Kia Bickham to others on the governor's staff, including Kim Hunter Reed, deputy chief of staff and policy director, and Dawn Verrett, another administrative assistant. Bickham wrote at 9:33 p.m. Tuesday that Schwiebert "will send 100 school buses from Iowa and will also help coordinate to relocate families to other states and help with any other educational needs."

The governor finally issued an executive order to commandeer buses late Wednesday night on the heels of a confusing e-mail from Ty Bromell, head of the Office of Rural Development, that very morning: "NO MORE CALLS FOR BUSES!!!!!!!!!!!!!!!!!!!"

At 9:32 p.m. that evening, Rochelle Michaud Dugas, the governor's legislative director, e-mailed a dire confession regarding the push for buses: "We turned down a lot."

Buses did not begin showing up in New Orleans until Thursday, three days after the storm made landfall, and they were only trickling in. A steady stream of buses finally started moving into the area on Friday, and evacuations continued throughout the weekend.

Meanwhile, from his home in Iowa, Schwiebert watched it all unfold on CNN as the week drew to a close, realizing with some pain that his drivers would have been in New Orleans well ahead of the fray.

As the call for volunteer boat owners went out the day following landfall, Brad Reeves of Shreveport closed his business, Reeves Marine, and organized a team of people to head into New Orleans to assist with search and rescue. He took a few boats from his own stock and ordered several more from nearby sources. In all, he had 15 boats in tow with two workers per craft, along with two surgeons in the party. Additionally, Reeves offered up his Baton Rouge condominium ' deed and all ' for any purposes necessary, whether it be for evacuees or government workers.

Karen Zoeller, communications director for the Governor's Office of the Workforce Commission, e-mailed Reeves' offer to her colleague Reed at 2:34 p.m. Tuesday with the following warning: "I hate to have him on the road and then arrive here with no contact and nothing to do."

After being told his services were indeed needed, Reeves headed into New Orleans Wednesday morning. "When we got there, someone with Wildlife and Fisheries told us we weren't needed," Reeves says. "I shut down my businesses to help out, but nobody wanted anything I had. But what really stands out in my mind is when three policemen from New Orleans drove up in a new Cadillac and said they needed one of my boats."

Shortly after the storm, reports surfaced that the Louisiana Attorney General's Office was investigating widespread thefts of about 200 cars from Sewell Cadillac in New Orleans ' allegedly by the NOPD. Reeves says he didn't have a problem handing over the boat, but now finds the entire event "very curious."

"The officer gave me his name and number and said he would return it when they were done," Reeves says. "When I contacted him some time later, though, he said the boat was gone, that it had gotten shot up and the bullets sunk the boat."

According to Reeves, Officer Patrick Conaghan was the policeman who took responsibility for his 19-foot aluminum boat. A spokesperson for the NOPD says Conaghan is still with the force and an investigation could possibly be launched if the appropriate papers were filed by Reeves, who says he will be filing a report.

In the end, his three-bedroom condo in Baton Rouge also went unused during the initial recovery period, even though it could have defrayed the growing costs of hotel rooms for evacuees and government workers.

Reeves says he hasn't lost faith in the system or even state officials, but hopes that the government might be better prepared should another Katrina ever develop in the Gulf. "I still respect them for everything they did," he says. "But there should have been some way to better handle this."