Credited with turning the tide in the Hurricane Katrina relief effort, the National Guard is preparing for the worst this hurricane season. 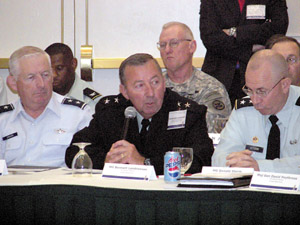 Credited with helping to turn the tide on the slow response to Hurricane Katrina last year, troops from regional National Guard forces are ready in larger numbers for this year's hurricane season.

While about 3,000 of Louisiana's approximately 10,400 National Guard troops were deployed in Iraq during last year's hurricane season, Louisiana has nearly a full force at home in preparation for the 2006 June-November storm cycle. Maj. Ed Bush with the Louisiana National Guard's public affairs office says only a few hundred Louisiana soldiers are currently deployed in Iraq and Afghanistan.

Likewise, in Mississippi, which had almost 3,500 troops in Iraq during Katrina's landfall last year, approximately 97 percent of its Guard is now stationed in the state. Bush said it's possible that more Louisiana troops could be called up to serve overseas during this hurricane season, but it's unlikely.

"They're sorting all that out [at the federal level]," he says. "At this time, I think it's somewhat reasonable to think that Gulf Coast states would not be called upon in any type of numbers that would hurt us in our ability to react to a hurricane.

"There's no planned rotation for any Louisiana guard brigade at this time," he adds. "But you know, I don't hang my hat on anything."

Guard officials have denied that having troops overseas last year significantly affected the response to Hurricane Katrina, citing the shuffling of guard troops from neighboring states into Louisiana and Mississippi. At a meeting with guard officials last week, Maj. Gen Douglas Burnett of Florida also dismissed the question that President Bush's call for 6,000 guard troops to serve as border security might strain the guard's ability to respond to hurricanes. "There are 457,000 National Guardsmen across America," he said. "It should be easy to reach out and pull from another state to support that border mission."

During the aftermath of Hurricane Katrina, the National Guard helped spearhead almost every aspect of the recovery effort: launching rescue operations, delivering food and water to evacuees, reestablishing communication networks, and assisting with evacuations, security and shelter operations.

The force peaked with 5,000 Louisiana Guardsmen on duty alongside 25,000 troops that had been sent in from across the country. All 50 states, with the exception of Mississippi, sent National Guard assistance to Louisiana following Katrina, making it one of the largest relief efforts in U.S. history.

Out-of-state Guard troops began arriving in Louisiana the day after Katrina's Aug. 29 landfall last year. By Sept. 2, there were 6,500 out-of-state troops in the New Orleans area.

This year, preparations are being made for a more rapid effort to bring troops into disaster areas.

Maj. Gen. Bennett Landreneau, head of the Louisiana National Guard, says he has been working with officials on the best location to pre-stage troops and supplies in order to ensure a quicker response once a storm passes. He also says the guard will be on hand early to assist state and local police with evacuations and security.

"Citizens need to know that there's a significant law enforcement presence," Landreneau said, "to take care of property so they are encouraged to go ahead and evacuate if there's a total evacuation required."

Landreneau was on hand with the governor, senior officials from the Department of Homeland Security, and National Guard officials from 11 other states and the territory of Puerto Rico at a briefing last week in Baton Rouge. The briefing came during the start of a two-day, hands-on hurricane preparedness exercise in Baton Rouge put on by the Department of Homeland Security to improve coordination and response to disaster areas.

Both federal and state officials at the meeting stressed that emergency declarations, as well as evacuation orders, are likely to come earlier this year.

"We must make sure that evacuation efforts are comprehensive," Blanco said. "What we need though are the resources to do that, and that's why we think that the pre-event declaration would be very important."

George Foresman, Under Secretary for Preparedness with the Department of Homeland Security, which oversees FEMA, says the federal government is "going to be committed to reviewing those declaration requests early" and "being able to lean as far forward as reasonably possible in terms of our preparatory action."

"Here in the Gulf," Foresman adds, "given the fragile nature of the infrastructure, we're going to make sure that we act on those declaration requests earlier and quicker so that we have more time to support the governors with critical assets to support evacuations and pre-stage assets in the region so as to maximize the response capability."

"In Alabama, we're a poor state," he says. "I don't want to [place troops] on state active duty. I need a federal emergency declared. I need to put them on Title 32 [federal active duty] because the bill is about $175,000 per day per 1,000 soldiers. And it takes a little while to get my money back out of FEMA. So I prefer to have them on Title 32 [in advance]."

Bowen is credited for being one of the first out-of-state guard commanders to have his troops on the ground in Louisiana following Katrina. He says any time a storm makes its way into the Gulf, he immediately begins assembling his troops into task forces, which consist of rescue, security, and logistics and communications specialists.

"I start moving them south in Alabama," he says. "And what I do then, if the hurricane doesn't hit us, they're prepared to go to Florida or Mississippi or Louisiana. Once it blows through, we can be there in two or three hours."

"The key for us," he adds, "is I ask for a 48- to 72-hour notice [to prepare]. If they'll give me the 72 hours, I will have a task force or two or three task forces that are in position, and all we do is make a right or a left turn. We can react as fast as FEMA wants us to react."

Blanco, flanked by more than 30 uniformed officers from the U.S. Army and National Guard at the conference, called the National Guard "the governor's most valuable tool in times of crisis."

"I don't think our nation has ever seen," she said, "the need for such a strong support system as Louisiana did during the aftermath of Hurricane Katrina and the aftermath of Hurricane Rita. The heroic actions of the men and women who served in our country's National Guard turned the tide in those darkest days that we were struggling through. They are responsible for saving tens of thousands of lives."

"Standing together with all of you," she added, "I am confident that we will make this hurricane season as safe as possible. I'm convinced that we can handle it. I don't think that there's a soul in Louisiana looking forward to this. We are praying that storms dissipate, knowing that they won't. But we are prepared as best we can be."