A splash of the cosmopolitan comes to St. Martin Parish through The Evangeline Players. 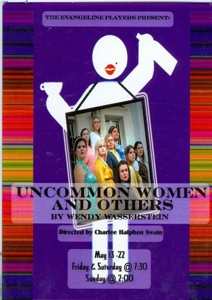 Uncommon Women and Others runs until May 22 at the Duchamp Opera House in downtown St. Martinville. The play, written by the late Wendy Wasserstein, centers around a group of women who all attended Mount Holyoke College in New England and reunite over lunch to reminisce about college and their current lives. A television movie was made of Uncommon Women in 1978 with Meryl Streep. Wasserstein wrote 11 plays and won numerous awards for her work, including a Tony and the Pulitzer Prize, before her death from cancer in 2005.

The Evangeline Players are a community theatre troupe based out of the Duchamp Opera House and host plays and musicals several times a year. The opera house came into being after the family that owned Bienvenu Brothers Department Store gifted the building to the city of St. Martinville and it was restored to the opera house it had been a century before. The building dates back to the 1830s.

There is just one more weekend to see this play. Tickets can be bought in advance at Shamrock Office Supply or at the Opera House itself, in advance or at the door. The play is performed every Friday and Saturday at 7:30 p.m. and a Sunday matinee at 2 p.m.