With floodwaters expected to crest next week, local and state officials are becoming scrappy, paranoid and watchful as some residents prepare for the worst.  By Jeremy Alford

The southerly winds blowing off the Gulf of Mexico in April were abnormal, as was the supply of moisture they held. And even after those damp winds traversed the wetlands and greensward of nearly a half dozen states, they still had enough moxie to impact the meteorological war waging in the Ohio River Valley. That's where warm and cool temperatures pushed and pulled for dominance as an incredibly strong jet stream ran underneath.

While Hollywood has helped tire the phrase, it was indeed the perfect storm. 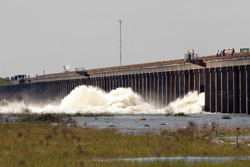 Floodwaters from the swollen Mississippi River rush into the
Morganza Spillway Saturday afternoon.

With floodwaters expected to crest next week, local and state officials are becoming scrappy, paranoid and watchful as some residents prepare for the worst.  By Jeremy Alford

The southerly winds blowing off the Gulf of Mexico in April were abnormal, as was the supply of moisture they held. And even after those damp winds traversed the wetlands and greensward of nearly a half dozen states, they still had enough moxie to impact the meteorological war waging in the Ohio River Valley. That's where warm and cool temperatures pushed and pulled for dominance as an incredibly strong jet stream ran underneath.

While Hollywood has helped tire the phrase, it was indeed the perfect storm.

The skies over Ohio, Indiana and Kentucky darkened in the shade of this battleground, creating immense water vapor as a by-product. Ominous clouds, seemingly multiplying, sagged with the weight of millions of vapor droplets banging against each other. As the droplets banded together, the heavier ones detached and fell. The Ohio River was a ready receptacle, as evidenced by its overflown banks.

These events alone made last month the wettest April of all time, according to the National Weather Service.

That's also about the time folks in Louisiana started paying attention, wondering if and when the Gulf's wicked moisture - a wetness that has long plagued coastal communities in a more direct fashion - would make its way back home.

When the floodwaters of the Ohio River finally made their anticipated turn in Cairo, Ill., where the Ohio feeds into the mighty Mississippi River, the writing on the wall was clear. In fact, the messages were written long ago during times of stress (see 1927, 1937, 1973, 1997 and 2008).

The Great Spring Flood is upon us.

While the timing is never good, memories of recent hurricanes and the BP oil spill are still too raw for yet another catastrophe. That's among the reasons tempers are hot at the state Capitol right now, where lawmakers have been summoning state and federal officials on a weekly basis for the latest information.

Each gathering has produced a rumbustious Rep. Sam Jones, D-Franklin, flailing away in an effort to goad Coastal Protection and Restoration Authority Chairman Garrett Graves, the top coastal adviser to Gov. Bobby Jindal. Graves, a Baton Rouge native who cut his teeth as a staffer on Capitol Hill and is roughly half the age of Jones, has yet to bite.

It's gotten to the point where some legislative leaders have asked Jones to lighten up. He hasn't. And some might argue that he's beginning to crack Graves' veneer: Last week, Jones actually pushed Graves to the point of calling the state representative's questions "absurd," a stretch for the normally cool-heeled Graves.

At one point, Jones pressed Graves to promise that the state would be there to help locals pay for emergency needs. He cited Katrina and the oil spill as reasons for his concerns. Graves suggested that he "direct his frustrations" to the federal level and to President Barack Obama. "I don't have access to the president. I have access to you," Jones said during a joint meeting of the natural resources committees.

During a similar hearing two weeks ago, Jones accused Jindal of using "rhetoric and shrill talk" to attack Obama, adding that it may have influenced the president's decision to ban deepwater drilling after BP's rig exploded roughly a year ago.

Jones was working for the Democratic administration of former Gov. Kathleen Blanco when the hurricanes of 2005 made landfall - and a pissing match between the White House and Baton Rouge caught fire. "Former Gov. Blanco made a decision not to do that," he told Graves.

"[Gov. Jindal] never stated anything publicly without trying to work with the appropriate parties," Graves responded.

Outside of the Capitol, the approaching floodwaters prompted dramatic actions across the state last week, like in Morgan City where officials have secured Corps approval to sink two barges at Bayou Chene in an effort to halt backwater flooding. Time, however, was an obvious issue. "I was informed it would be an eight- to 10-day process to make that happen," says state Rep. Joe Harrison, R-Napoleonville.

Lt. Col. Mark D. Jernigan, deputy commander of the New Orleans District of the U.S. Army Corps of Engineers, says he had no idea when the barges would be in place. That's not what locals wanted to hear.

"The Corps has been great and timely in approving our request," Jones says. "We didn't have that in 1973. We violated every rule they had and went and broke them anyway. This time there's more cooperation. We're going to sink that barge whether we get approval, whether we get funding, whether we have to borrow it or sell crawfish by the side of the road."

While the Bonnet Carre Spillway to the east was opened earlier this month to divert water away from New Orleans, a second relief valve on the river closer to Baton Rouge, known as the Morganza Spillway, was partially put into operation over the weekend.

That decision sent floodwaters gushing into the Atchafalaya River Basin, thus threatening some 2,500 people and 2,000 structures in the Acadiana region.

Jernigan showed lawmakers a slide of an inundation map that forecast water as tall as 15 to 20 feet in the locale of St. Martin Parish and elsewhere as a result of Morganza's opening.

Jernigan admitted that the Corps was only working in "ranges" at the time and couldn't pinpoint any details as concrete, but Jindal did tell reporters last week that such backwater flooding could impact up to 22.500 residents and 11,000 structures.

Before Morganza was opened Saturday, Jernigan said it would take about two days for the waters to reach Iberia Parish, three days for Morgan City and about four or five days for the backwater flooding to occur. "It wouldn't be a tidal wave effect," he said. "Gradually it would take some time for the water to fill up the floodway and move down the Atchafalaya Basin."

Had Morganza remained closed, water would have reached historic levels around Baton Rouge on May 22 or so, and published reports have indicated potential problems for the campus of Louisiana State University, which is on property hugging the nearby river levee. Jernigan confirmed as much, without shedding additional light on the possibilities.

To be certain, there are reasons that confidence in Baton Rouge's protection system might by lacking. For example, Jernigan says he currently has a team investigating seepage in the levee near Duncan's Point south of Brightside Drive, an area better known as River Bend. "There's no doubt (the system) is getting stressed," he told lawmakers. "In periods of high water, you do see seepage and sand boils."

Environmental and wildlife concerns are beginning to sprout as well, Jernigan adds, especially as black bears, snakes, deer and other animals are pushed out of their habitats by water. Rep. Major Thibaut, D-New Roads, says it's an occurrence that officials better get a handle on sooner than later. "Especially in agricultural communities, these animals are going to move out of their habitats and start eating everyone's livelihood," he warns. "If it comes to a decision between saving your livelihood or getting a $500 fine for shooting a deer out of season, I'm afraid of what my people might do."

As for what's in the anticipated floodwaters, some of which has already been pulled through residential and commercial areas further north, Jernigan offers no new guidance. He simply says it's too early to tell.

Lawmakers, meanwhile, remained positive during last week's hearing, even as dire predictions overshadowed all else. "Things are really tense right now," said Rep. Karen St. Germaine, D-Plaquemine. "And believe it or not, we all still want to live where we live."