Business community rallying behind the scenes to aid Durel's vision for the UL horse farm becoming a public park. 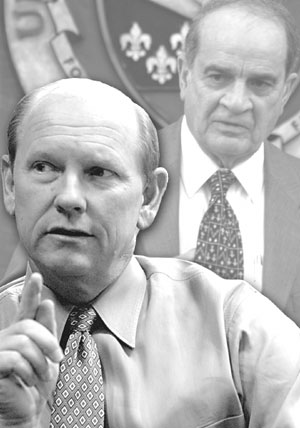 UL Lafayette students and concerned residents' dream to save the horse farm from commercial development may be more than just an item on their Christmas wish list.

Since The Independent Weekly reported City-Parish President Joey Durel's interest in converting the 100-acre UL horse farm into a public park, a number of influential business leaders have contacted him to get involved in the effort to preserve the community landmark. Durel's interest in the Johnston Street land was noted in an Independent editorial calling for UL President Ray Authement to back off the proposed exchange of 36 acres of the horse farm for 4 acres of attorney Jimmy Davidson's residential property on Girard Park Drive ("Open Letter to Authement: Kill the Deal," Dec. 7).

Durel says the interested parties — which include individuals from the real estate, legal and manufacturing sectors — are not only proposing a public-private partnership, but they are also willing to provide their services free of charge. One individual has apparently offered to donate the funds for the land-purchase portion of the venture, but Durel declined to identify any of the potential partners at this time.

An outright sale of the state-owned farm will require a public bid process (which may jeopardize Lafayette Consolidated Government's position), and Authement has said the university would be able to keep any proceeds to buy land closer to campus. However, local government may be able to structure a land swap of its own, as Durel is willing to exchange the city's 8-acre Youth Park, which — unlike Davidson's property — is contiguous with the university. He's also indicated an interest in turning over part of Girard Park near the Alumni Center, what appears to be a suitable spot for a new university president's home. (Authement says his home near Martin Hall will eventually be consumed for university expansion.)

If the land is secured by LCG, possibly via a swap and donations channeled through the 5-year-old Community Foundation of Acadiana, any plan to finance the horse farm's transition into a public park will likely be aided by the numerous volunteers from organizations such as www.savethehorsefarm.com, who are researching grants and other mechanisms that may be available. It's also possible a portion of the horse farm may need to be sold off for residential development, Durel says, to help raise funds for the park.

Durel hopes Authement will view his plan as a welcome option to the current land-swap deal the community overwhelmingly opposes and at press time was trying to set up a meeting with the university president.

Authement, who in the past has not expressed any willingness to entertain alternatives to the deal now on the table, is now willing to listen. "If there's anyone out there that would like to propose a plan, he would be more than happy to talk to them," says UL spokeswoman Julie Dronet.

"There are just so many possibilities," says Durel, who hopes to secure the acreage quickly to protect the pristine land from commercial encroachment. "[If] this thing is developed into cement, it's over," he notes. "Ideally, it would be wonderful to have 100 acres with as little cement as possible, with ponds, lakes, an amphitheater, more pedestrian, bicycle-type [activities]." He also wants to restore the two small homes and antiquated dairy barn, all of which are in dismal disrepair.

In discussions with students, Authement put a general price tag on the horse farm. In his first meeting with students, the 77-year-old university president said he'd sell the farm for $8 million, according to UL student Elizabeth Brooks, one of the organizers of the "Save the Horse Farm" effort. In a subsequent meeting, says Brooks, Authement indicated $8 million would be the starting price, and a public bid would determine the actual sales price. Last week The Independent reported that the Board of Supervisors for the UL System has called for a new, independent appraisal of both the horse farm and Davidson's Girard Park property, which were each previously valued by two different university-hired appraisers at $3.25 million.

The Board of Supervisors, which approved the now controversial land swap in August, would have to give its nod to any new arrangement, whether in the form of a restructuring of the current exchange or a new one with LCG. The university is seeking to rezone the front portion of the horse farm from residential to business but had initially proposed to swap that portion at its lower residential value. The board later ordered that it be re-appraised based on its pending rezoning application to commercial, which increased its value from $3.25 million to $5.37 million.

As he explores various options and hopes to get Authement's ear, Durel is keeping the university's interests in mind. "The one thing we can't lose sight of is the university has some needs ' that [land swap] was a way for them to satisfy some of those needs," Durel says. "They evidently either need land or money."