The state has approved insurance measures that help and hamper policyholders, leaving many to wonder when real assistance will arrive. 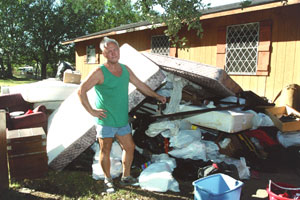 Only during this period of Louisiana's long history would Al Trautman be able to tell his story with little or no shock value, as it's an all-too-familiar tale after last fall's storms. Trautman can now stand in his bedroom and enjoy a panoramic view of his backyard ' credit Hurricane Rita for the remodeling job.

All of this comes as Trautman reaches the age of 64, having lived most of his years in Lydia, a small community just south of New Iberia. Lydia was once a joyful place to coexist with nature and friends, but now Trautman wonders if his town has been written off the map. He says no local, state or federal elected officials have come to survey the damage left by 3 feet of surge waters.

"I haven't seen a single soul out here," he says, four months after the hurricane made landfall. "It's as if the storm didn't even happen."

Then there are insurance issues. His provider has yet to even take a look at his property, and there's still no word on his original claim. Trautman thought he had flood insurance through a private insurer, but that can't possibly be the case, as the federal government is the only entity that provides primary flood coverage ' through the National Flood Insurance Program. His insurer asked for another $2,400 last year, and Trautman suspects it had something to do with elevations, but he's not sure.

Like most others in his situation, Trautman will need some time to figure out what's in his insurance policies. Most people would rather have a root canal than actually read the voluminous fine print in their homeowners' policies. A recent survey by the Insurance Information Network, a nonprofit research organization financed by the industry, found that 27 percent of consumers haven't looked at their policies in three years. That's not surprising, considering the policies are chock full of arcane and circular Da Vinci Code-esque language.

But that situation may be changing in Louisiana.

During the November special session, the state Legislature passed a law requiring insurance companies to place a one-page coversheet on all new and renewing policies stating what is and isn't covered, including damage from wind, flood and mold, as well as maximum payouts. One of the bills that created this law came from north Louisiana Sen. Robert Adley, who argued last year that his constituents were having some of the same problems that bayou residents faced in the wake of Katrina and Rita.

It was the first real act of consumer kindness by the Louisiana Legislature concerning insurance issues after the storms. Meanwhile, that warm and fuzzy feeling that lawmakers give themselves for passing consumer-friendly measures is getting fuzzier by the day. Entire legislative hearings have been dedicated to why adjusters aren't inspecting damaged homes, why checks aren't arriving and why insurers aren't responding to claims. A special session set to begin next week is expected to address some insurance issues, but nothing specific was brought forth as of late last week.

In addition, speculation is running rampant that state Insurance Commissioner Robert Wooley will resign, setting the stage for a special statewide election in the fall.

In the midst of all that confusion, insurers are lining up to increase their rates. Allstate is planning an unspecified premium hike in 2006, according to a regulatory briefing, and the Louisiana Citizens Property Insurance Corporation recently announced that ratepayers could experience a 10 percent boost in coming years. Additionally, just a few weeks ago, the state's insurance commission approved an average 23.3 percent increase for ANPAC Louisiana Insurance Company.

While the Legislature has limited authority over what the Louisiana Insurance Rating Commission does, some lawmakers are asking commission members not to repeat the ANPAC decision.

"These people don't have money to pay their bills because it went to pay the roofer, and yet the Insurance Rating Commission is going to put more of a burden on these people by allowing a company to raise their insurance rates," says Sen. James David Cain, a Dry Creek Republican who could run for insurance commissioner if Wooley resigns.

J. Robert Hunter, former head of the National Flood Insurance Program and director of insurance for the Consumer Federation of America, a nonprofit advocacy group, says it's all about profits ' and the train is already out of the station.

"Families will have to dig deeper into their pockets because insurers have been steadily increasing hurricane coverage deductibles and making other policy limitations," he says, via a written statement. "This liability shift back to consumers may take many by surprise."

Another consumer group, Americans for Insurance Reform, recently released a comprehensive report documenting the insurance industry's response to the hurricanes. Joanne Doroshow, AIR's executive director, says many victims were naively looking to their providers for assistance they couldn't find elsewhere. "What many found was no help at all, resistance by insurance companies to pay them anything, leaving victims frustrated and angry, not to mention destitute," she says.

It's a watershed moment for the insurance industry in Louisiana, as insurers are dealing with an unprecedented set of natural disasters. Everything about the industry is in the process of changing ' how people obtain coverage, how they understand their policies and what they pay.

How that plays out is anyone's guess ' leaving Trautman in limbo.

"We have a lot of good people who lost their houses in these hurricanes," Trautman says in a follow-up interview from his temporary rental home in New Iberia. "We're trying to get help and move on, but all we can do is wait to find out what's going to happen, and that's not fair."