California-based company out of the running for proposed north Lafayette development. 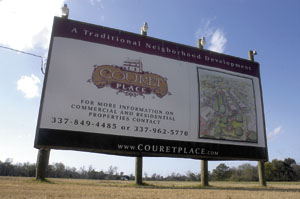 By Thursday, Feb. 8, Marcus Fontenot had washed his hands of Cal-Bay International. After months of failed negotiations, the local attorney has stopped communicating with the California-based company that claimed it wanted to buy the troubled 2-year-old Couret Place, a real estate development planned for north Lafayette by a group of investors that included local accountant John Royston. John's son Kevin and Kevin's wife, Ronnie, a convicted felon, were also involved in the project ("Couret Place's Criminal Past," Feb. 7).

Fontenot represents the Buller family of Ville Platte, which owns the 177-acre tract near Acadian Hills Golf Course. The Bullers sued Couret Place Inc. for breach of contract in September but have not pursued the litigation because of Cal-Bay's interest in taking over the project.

"[Cal-Bay] had a deadline to do certain things, and they did not do those things," says Fontenot, who declined to discuss any financial details of the negotiations. However, a source close to the proposed deal says the Buller family was requesting a $100,000 good faith deposit, which Cal-Bay failed to produce.

Cal-Bay representatives did not respond to phone and e-mail requests seeking comment for this story.

In early December, Cal-Bay Vice President Bill Sickert told The Independent Weekly the company planned to purchase Couret Place Inc., pay the Buller family for the land and proceed with plans to develop the real estate project into a mixed-use, traditional neighborhood much like south Lafayette's River Ranch. Based on the Bullers' asking price and the debt that accumulated ' a number of contractors who did work on the site are owed several thousand dollars each, one as much as $437,000 ' it's estimated that Cal-Bay would have had to invest from $9 million to $12 million just to get into the project. Subsequent development costs would have drastically increased that initial investment.

On Jan. 18 Cal-Bay, a publicly traded real estate development group based in Carlsbad, Calif., announced that it had secured funding for what it called a $400 million "residential/commercial golf course development project" in Lafayette. The Buller family property is next to Acadian Hills Golf Course, but the course is not part of the deal. "It really upset me when I saw that in print," says Acadian Hills General Manager John Guilbeau. "We don't know those people."

But the major red flag raised by the announcement was that the Bullers, who still have title to the property, had yet to finalize the deal with Cal-Bay. In mid-January, Fontenot said the company had missed a deadline to respond to the Bullers' offer. "There is no deal with Cal-Bay," Fontenot now says.

Cal-Bay International is a "penny stock" that does not trade on a major exchange. As of late last week, Cal-Bay's stock price had dropped to 2 cents per share, and the company had a market value of $824,800. The stock is down 98 percent from a high of $1.10 in March 2006.

Other parties not related to Cal-Bay or Couret Place Inc. ' it is widely speculated that John Royston or his partners brought the California company to the table ' have expressed interest in the property, and the Bullers want to sell the beautiful tract. The problem is that the property is now tied up in a legal quagmire of lawsuits and liens filed by local companies that did work on the site. An undetermined number of people also put money down on lots in the residential portion of the proposed development.

In their lawsuit, the Bullers say they were unaware that local contractors had begun working on the property because Couret Place Inc., led by John Royston, who over the years has had numerous financial disputes with local companies, was continually trying to renegotiate the deal, and the two parties had yet to come to an agreement. The Bullers claim Couret Place Inc. did not have the financial wherewithal to meet the original agreement and disguised a new revenue sharing program as a better deal for the family in order to delay payments.

Fontenot says Cal-Bay told him during earlier negotiations that it had purchased Couret Place Inc., which could add yet another layer of legal complications. "Later on in our negotiations, they said they were negotiating to acquire it, so I don't know [the status]," he says.

Since Fontenot called off the deal, however, Cal-Bay has a new legal problem. On Feb. 6 real estate appraiser Lane Godshall's company, hired by Cal-Bay to appraise the property in October, filed suit in state district court seeking $4,500.

Godshall says he was unfamiliar with Cal-Bay when asked to appraise the property, so he requested up-front payment for his services. "They sent me a check via FedEx," he says. Godshall conducted the appraisal, sent it to his client in mid-November and deposited the check. He then went out of town for a week.

"I came back, and it had bounced," Godshall says. When Godshall called the company, vice president Sickert blamed an administrative error. Recalls Godshall, "He said, 'We have like six bank accounts and are always moving money around.'" After that initial conversation, Godshall says Cal-Bay representatives stopped taking his calls.

When his demand letter was also ignored, Godshall filed suit. "That hasn't happened to me in a number ' a number of years," the appraiser says.