Lawtell native Maureen Little takes her culinary expertise on the road and into homes. By Sue Schleifer

For six months, Chef Maureen Little exchanged email messages with a soldier serving in Iraq who found her through an Internet search. He was looking for someone who could make a special, New Orleans-style dinner at which he would propose to his girlfriend. The dinner was scheduled for when he would be on leave and when his girlfriend could fly in for a three-day visit. 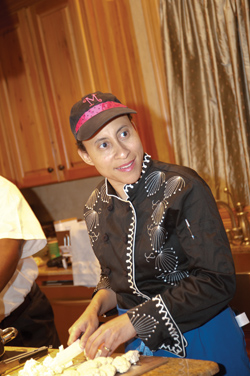 Lawtell native Maureen Little takes her culinary expertise on the road and into homes. By Sue Schleifer

For six months, Chef Maureen Little exchanged email messages with a soldier serving in Iraq who found her through an Internet search. He was looking for someone who could make a special, New Orleans-style dinner at which he would propose to his girlfriend. The dinner was scheduled for when he would be on leave and when his girlfriend could fly in for a three-day visit.

Little not only prepared an amazing meal, but she arranged for a limousine to take them to a lake, where a yacht ferried them to a dock set with an elegant table for two. A waiter served the specially prepared courses, and a photographer hid in the bushes to capture the moment of the proposal.

Between the salad and entrée course, the soldier on leave walked up to the house and into the kitchen clearly nervous: "What if she says no?" Little assured him all would be fine and after each shared a few tears from the stress of it all, he rejoined his soon-to-be wife.

A South Louisiana native, Little has one desire - to create special memories for her clients. "I find a great deal of pleasure in preparing an intimate dinner for a couple and helping them to celebrate a special occasion," she says. Little has a degree in culinary arts from Delgado Culinary Institute in New Orleans and more than 13 years of professional experience. Her primary training has been in French, Creole and Italian cuisine, and she has worked at restaurants like Louis the XVI, Le Parvenu and Bravo Italian Kitchen. In addition to her restaurant experience, she trained with top pastry chef Nicholas Lodge, the former chef to Buckingham Palace.

In 1998 she started her specialty catering company, Virtual Bistro Catering, first in New Orleans, then in Midland, N.C, and in 2005 moved her business and family back to her native Lawtell. In 2009 she was invited to French Guyana where she taught Creole cooking and participated in the Festival of Spices. She was the only chef representing the U.S. Her mother traveled with her as an interpreter, her father as her assistant chef.

In December, Paula Carriere of Opelousas decided her annual themed cocktail party for 20 guests would feature pizzas from Naples, Italy. "I love to cook, especially foods from around the world," Carriere says. "I love learning about different spices and herbs and researching recipes." As a Christmas present to her husband, who wanted her to leave the cooking to someone else so that she could spend more time with their guests, she hired Little to cook the pizzas.

Prior to the party, Carriere not only brought to the meeting with Little the recipes she had found, but also a portable player and DVD to give Little a visual example of two of the pizzas. That was a first for the chef. "She did a beautiful job," Carriere says. "She prepared varieties of special pizzas that you wouldn't find in a restaurant. She prepared everything in front of the guests, like on Emeril's TV program. Our guests got to taste all six pizzas as they came out of the oven. It was fun to watch Maureen and watch my guests watching her. It was quite an eventful evening." 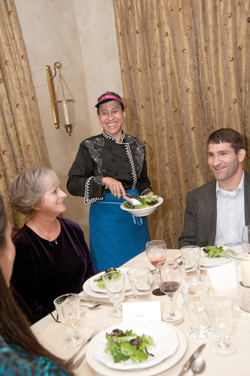 Carriere worked with Little again recently for an elegant dinner for 10 guests. This dinner featured a five-course menu with a pastry theme. The main entrée included beef wellington stuffed with a wild mushrooms paté. She was a bit hit.

Gary Cruice read about Little in a magazine and got the idea to offer a cooking lesson for his daughter as a unique gift. "Rebekah enjoys baking and was considering a career as a pastry chef. I thought that this would be a great way for her to learn more about pastries and also to talk with Maureen about her career and what it is like to be a chef," says Cruice.

Little and Rebekah together made French crepes folded and topped with a banana foster filling, crème brulé, cream puffs filled with a chocolate mousse, a raspberry coulis and they also sculpted roses out of fondant.

In addition to sharing her talents with her clients, Little enjoys teaching her three boys, ages 6 to 12, how to cook and also has written and is currently illustrating a children's book, Dessert on My Plate (which is what she calls her boys).

On a recent Saturday morning, when her boys awakened and entered their kitchen, they were each given their own small cutting board, two pieces of bread, a small ramekin, an egg and a fork. She showed them how to cut out a piece of bread for the bottom of the ramekin and how to line it with bread. They beat their egg and added pieces of crumbled bacon that she had prepared. And then they baked their creations. As they came out of the oven, Little tied a cloth napkin around each ramekin so that the boys could eat while it was hot. "They really enjoyed it," Little says with pride.

Besides cooking lessons, dinner parties, and special dinners for couples, Little hosts team-building cooking lessons and competitions for work groups and friends. "For corporate team members, cooking can be a great way to come together and to learn about leadership," shares Little. "Each team has to plan a menu with the ingredients provided," she says. "One person emerges as the team leader and then they work together to accomplish the task within a time frame. Then we debrief on what they have learned from the experience and, of course, eat the fruits of their labors."