Wednesday, May 25, 2011
**
Lafayette's movie business is steadily growing and offers plenty of chances to see locals and landmarks on the big screen
this summer.  By Erin Z. Bass**

Diners at downtown's Filling Station restaurant may have witnessed some strange activity during lunch on an overcast Thursday in April. First of all, the Mexican-inspired restaurant seemed to have had a menu change, as hot dog advertisements were posted on the front windows. And then there was the police car that kept screeching into the parking lot and a group of guys running around in a circle. This behavior wasn't the result of too many margaritas. It was Active Entertainment filming its latest flick for the Syfy Channel, Alien Tornado. 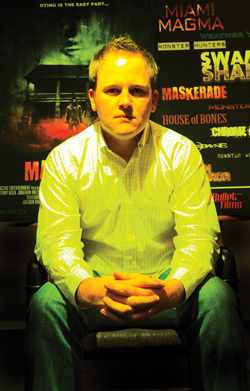 Wednesday, May 25, 2011
**
Lafayette's movie business is steadily growing and offers plenty of chances to see locals and landmarks on the big screen
this summer.  By Erin Z. Bass**

Diners at downtown's Filling Station restaurant may have witnessed some strange activity during lunch on an overcast Thursday in April. First of all, the Mexican-inspired restaurant seemed to have had a menu change, as hot dog advertisements were posted on the front windows. And then there was the police car that kept screeching into the parking lot and a group of guys running around in a circle. This behavior wasn't the result of too many margaritas. It was Active Entertainment filming its latest flick for the Syfy Channel, Alien Tornado.

In the film, The Filling Station doubles as a hot dog stand outside Wrigley Field and downtown Lafayette as downtown Chicago. Aliens are using tornados to destroy government buildings, and it's up to a world-renowned storm chaser and local farmer to stop them before they destroy the Windy City. If that's not campy enough, one of its stars is Bernie from Weekend at Bernie's.

Active Entertainment (formerly know as Bullet Films) COO and producer Daniel Lewis explains that visual effects will be used to enhance The Filling Station and give it more of a Midwest feel. As for the guys running around in a circle, a tornado can digitally be added in no time.

While Alien Tornado isn't due out until next spring, locals may recognize a few other area locations making cameos on TV and DVD soon. In Swamp Shark, which premieres June 25 on Syfy and stars actress Kristy Swanson (a.k.a. Buffy the Vampire Slayer, from the 1992 motion picture), the Atchafalaya Basin is terrorized by a large sea creature, and Maskerade, now available on DVD and by digital download, was shot at Couret Farms in Carencro. In addition, Maxim Entertainment's The Zombie Farm features locals like travel agent and musician Robbie Bush and Guamas restaurant owner Rubens Mesa and is viewable on DVD and Video On Demand.

Attendees at Festival International may have caught a glimpse of filming of Dirt Road to Lafayette, based on a book by a Scottish author about a boy on a road trip with his father who discovers zydeco music that changes his life. The film is a partnership between Active Entertainment and Matador Pictures.

Active Entertainment set up shop in Lafayette about three years ago and has since produced 14 films and expanded to employ 15 people full-time in office space off Pinhook Road. Lewis, a 2004 graduate of LSU, says Lafayette was an "open book" when it came to making movies.

"There wasn't a lot of production going on here, if any, so to be able to come in and help nurture the industry and help grow the industry and provide jobs to people that really want to be in this business, it's rewarding," he says. "Lafayette's got all the great different locations. You can really shoot anything here."

Three years later, Lafayette remains a great place to make movies, but the city is no longer a newcomer to the industry. A 2 percent local sales tax incentive is now in place, and due to the formation of Lafayette Entertainment Initiative, there are people whose sole job it is to promote the industry in town. Lafayette is still missing a few key components of the movie biz and doesn't have major celebs walking the streets on a regular basis, but those working to grow the industry say Lafayette's time is coming.

"From a location standpoint, Lafayette is in a great position," says LEI's John Petersen, whose part-time position with the organization became full-time last fall.

"It's a refreshing experience for productions to shoot in Lafayette, because we make things as easy as possible while still being safe. What we're focused on now, in a big way, is getting over some hurdles to break through into the level of productions Baton Rouge and New Orleans have seen."

Lafayette did get its moment on the big screen in Secretariat last year, but so far that's the only blockbuster on the city's résumé. Lafayette native Blaine McManus, who co-owns Maxim and spends half his time in Louisiana and the other half in Los Angeles, says he's looking to bring a slate of action films to Lafayette, in addition to a movie with a big budget and big stars. McManus isn't ready to drop names yet, but says, "I've got two films that are the biggest I've been involved with. One's a $15 million and one's a $25 million, and one of them could shoot in Lafayette; the other one will probably shoot in New Orleans."

McManus does lay claim to producing the first film shot entirely in Lafayette - The Zombie Farm - and says he's glad to see the industry progressing.

"In a small community where you're trying to get a new industry started, there's no such thing as competition," he says. "You want there to be more than one game in town, because that will create industry growth."

On the crew end, Active Entertainment has grown its local base by about 50 percent and also made a commitment to train two or three new people for each of its films.

UL Lafayette's new Moving Image Arts Program is also helping to fill the gap by training students who want to work in the film industry. "The whole reason for the program is because economic development officials in Baton Rouge saw a need for developing workforce because of the growing film industry," says Director Charles Richard. "While this program will definitely make a major contribution to workforce development, education needs to be supplemented by workplace experience so we try to provide as many opportunities as possible."

Petersen says his office is working to make people aware that jobs in the film industry are available. (LEI also has a database of possible film locations on its website that anyone can contribute to and is looking to start a vendor incentive program where local businesses would offer discounts to film productions.) As for a soundstage in Acadiana - something that's sorely lacking and puts Lafayette at a disadvantage versus Baton Rouge and New Orleans - Petersen says, "There's no set plan for that yet. We need something, because for some projects not having that is a nonstarter. Even if it's a temporary solution that can be proof of concept, we're going to have to tackle that at some point."

In the meantime, Lafayette has other perks going for it. The Acadiana Film Festival, now in its fifth year and scheduled for Nov. 17-20, further promotes the cause by presenting local and independent films in venues around town. Surrounding rural areas and small towns provide a plethora of potential filming locations, and, as Lewis points out, Lafayette is a friendly town.

"This business is all about relationships," he says, "relationships with the vendors you need, the crew you need, the actors, the directors, and Lafayette is so relationship driven and everybody here is so welcoming. Just being embraced by the people in the community, being able to pick up the phone and make one phone call to get something done quickly, it's really attractive.

"The more projects that come into Lafayette," he continues, "the more people that are going to have opportunities, the more the local vendors and the local community will start seeing this as a real business and not just this Hollywood industry."