Four years ago, Dale Bourgeois and Bruce Conque narrowly edged out two incumbent councilmen. Now, a group of eager challengers hopes to turn the tables on them. 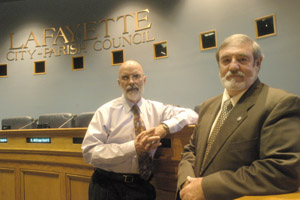 When Dale Bourgeois ran for Lafayette City-Parish Council four years ago, he began walking neighborhoods in February, eight months before the election. He and a group of family and friends would trek across his sprawling North Lafayette district's subdivisions in teams, toting walkie-talkies to coordinate. "It was important to get out early," Bourgeois says. "I live in a big district." Bourgeois was also making his first bid for public office, and running against Bobby Castille, a two-term incumbent. "I think I outworked him," Bourgeois says of his upset victory.

The same held true for Bruce Conque, who began earnestly walking the streets of District 6 in July. "By the time the election was held I had visited almost every home at least twice," Conque says. "I was coming from out of nowhere. Everyone assumed that the incumbent was well situated and was going to win." The incumbent he defeated, Jerry Trumps, was the sitting chairman on the council. Conque, a former broadcaster who now owns his own marketing business, says he never positioned himself as an underdog. "I just took the attitude I wasn't running against the incumbent," says Conque, who never mentioned Trumps' name while campaigning. Conque defeated Trumps by just under 150 votes. "It was a very studied effort in bringing my name forward," he says, "and making a positive impression to the public that I'm involved, I'm there, and ready to serve. And I think that paid off. That was my whole tact: promote Bruce. And I'm going to do the same this time."

This time, however, both Conque and Bourgeois are on the inside looking out. They face a group of energetic challengers, all armed with hot-button issues, who hope to pull off similar upset victories. Conque and Bourgeois are the only sitting councilmen seeking re-election. Three others, Marc Mouton, Bobby Badeaux and Rob Stevenson, have decided not to run again, and the remaining four are term-limited.

Being an incumbent councilman up for re-election can be a double-edged sword, especially in light of the turmoil that tarnished the council's reputation in the past two years. Strained relations among council members reached an all-time high last year with the Martin Luther King Memorial Drive issue and south side versus north side road funding. "I think [the incumbents] have a problem," says Denice Skinner of the Lafayette Parish Republican Party. "I think the sentiment on the street is just to throw it all out and start over again. People are upset with the way this council, as a whole, has treated the community with the bickering and the disrespect."

"I see some of that working against me," Bourgeois says. "But I really try not to be a part of that. Even though we had turmoil on the council, the citizens' business was still done. It's a shame there was a lot of confrontation and bickering on the council. I know it may sound funny, but on the whole, things could have been a lot worse. Cooler heads often did prevail with the conflicts we had."

In District 6, Doré has adopted the mantra of "bringing unity back to the council" as his signature issue. "If the council can't work with each other," he asks, "then how are people going to be able to work with the council?" In his effort to unseat Conque, Doré has enlisted the support of Lane Cortez, younger brother to District 43 state Rep. candidate Page Cortez. Conque's other opponent, Farrar, is mounting his campaign on economic development issues, as well as raising questions about Lafayette Utilities System's fiber-to-the-home project, an initiative he opposed.

Castille, a retired firefighter who stands to be one of the beneficiaries of any type of settlement agreement with city-parish government on the back pay lawsuit, has championed the fire and police departments throughout his campaign, which kicked off in March. Castille is a former president of the Lafayette Firefighters union, and his brother, Terry, is its current vice-president. "The police and fire departments are down to skeleton crews," Castille says. "That's uncalled for."

Bourgeois and Conque point out that the city only temporarily shut down some fire stations due to worker shortage and renovation issues. They also say the shortfall of police officers has been an ongoing dilemma for the city, but that the council has allocated money in the budget to fully staff the department. In addition, they note the city has recently used its spike in sales tax revenue to replace a majority of the police department's aging patrol cars.

Conque says that the advantage and disadvantage of being an incumbent is having a record to run on. He and Bourgeois are both touting their achievements, which include the fiber initiative and reforms passed in 2005 to reign in the council's travel and dining expenses. "If I haven't done the job in the last three and a half years, then I don't deserve to be on the council," Conque says. "That's the bottom line."

Bourgeois and Conque also highlight their knowledge and familiarity with the inner workings of city-parish government. With a guaranteed turnover of more than two-thirds of council members, Conque is betting that experience should play a big factor in this election. "Continuity and experience is a big issue," he says. "It's not an easy system to absorb in a short amount of time. Here I am three and a half years into the term, and I'm the first to tell you I'm still learning how everything gets done. Every day you learn a new need and how to address it."

"You have to have some history," Conque adds, "someone to whom you can turn and say, 'What about this?'"

The incumbents are banking on their experience and their reputations with constituents to carry them. Both know all too well how an election can turn in favor of the newcomer. "I'm in a full blown campaign," says Conque, who is planning two mass mailers to voters. "I'm not holding back. You can't take anything for granted."