Fiber goes to the ballot, a UL sports employee's rant to 'USA Today" and more ... 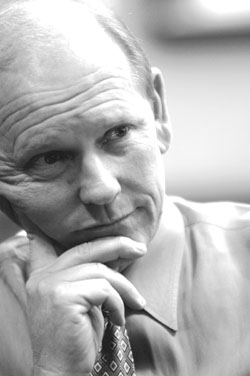 FIBER GOES TO THE BALLOT

The die is cast ' the Lafayette Utilities System's fiber-to-the-home initiative is going to a public referendum.

At press time, City-Parish President Joey Durel was scheduled to announce on Tuesday, March 15, that Lafayette Consolidated Government and LUS will not appeal judge Byron Hebert's Feb. 26 ruling requiring LUS to start over on its bonding process. Rather than challenge Hebert's decision via legal channels, Durel and LUS are going to let the people decide whether fiber-to-the-home comes to Lafayette. The referendum will be placed on the ballot of the July 16 election.

In a statement, Durel wrote, "To appeal the ruling or to proceed without a referendum would be met by further lawsuits that will endlessly stall our momentum. We cannot delay this project any further."

Durel pulled no punches against BellSouth and Cox Communications in his statement. "Having been unsuccessful in stopping our project in the Legislature, the out-of-state telecom companies know by experience that the only way to defeat our Fiber for the Future plan is at the ballot box. â?¦ The telecom companies will spend unlimited dollars in advertising to try to convince you to vote against this project. They will attempt to confuse you with misstatements, scare tactics and outright false information about the project. I urge you to be cautious and study the issues carefully."

The public referendum became inevitable in recent weeks. If LUS appealed Hebert's ruling, it risked the appearance of ramming through the project without public consent. And even if Hebert's ruling was overturned, BellSouth would likely have appealed and tried to send the case to a higher court, setting off another tortuous round of delays.

Because LUS is a government entity and cannot spend taxpayer money on advertising, Durel is hoping a grassroots citizen's movement will propel the project to victory at the polls. (He urged volunteers to email [email protected] or call 291-8926.)

With the referendum a full four months away, Lafayette residents can expect to be bombarded with a whole new level of government and private discourse and media coverage of the fiber initiative. ' SJ

Maybe UL Lafayette Sports Information Director Daryl Cetnar was having a really, really, really bad day. Maybe his dissatisfaction with his job had been building for some time. Maybe he wants to get fired from UL. Whatever the situation, Cetnar was clearly inspired by a USA Today poll that asked readers to write in their nominations for the Top 10 worst jobs in sports. On Feb. 27, Cetnar's response to the poll was posted on USA Today's Web site.

"My suggestion is sports information director for a mid-major football program," wrote Cetnar. "You make about $30,000 annually. The travel includes 50 events a year by bus or plane, covering 20,000 miles, and the cities are not New York or Los Angeles; think Moscow, Idaho, and Jonesboro, Ark. You work 12-hour days, designing, writing and editing press guides, releases, schedules, posters, to name a few of the duties.

"And the worst thing is small schools have no money, not even for office supplies, so SIDs are forced to take the pens and paper from hotel rooms."

As far as work rants go, it's an impressive showing. In just two quick paragraphs, Cetnar disses his salary and hours, the hometowns of UL rivals, and implies that UL's sports budget is so small that Cetnar uses Holiday Inns across the country for his stationery needs.

Reached by phone last week, Cetnar refused to comment on his comments.

Cetnar's missive isn't a big deal to UL Sports Director Nelson Schexnayder. Despite that it had been almost two weeks after Cetnar's comments appeared, Schexnayder said last Thursday that he hadn't spoken to Cetnar about the SID's letter. "I've been traveling and he's been traveling, so I haven't had a chance to talk with Daryl," says Schexnayder. Asked if he was concerned that Cetnar's comments might reflect poorly on UL, Schexnayder replied, "Frankly, no. Daryl works hard, does a good job and doesn't complain to me." ' SJ

NOT WHAT JIMMIE WALKER HAD IN MIND

Simoen Lebleu, a 44-year-old Lake Charles man, was convicted and sentenced to 10 years in prison for threatening to kill a Texas judge by sticking dynamite in his mouth. The Houston Chronicle reported last week that witnesses stated that Lebleu's threat was to show the judge "what it felt like to have somebody else control his life." On a separate conviction for threatening to have his wife killed, Lebleu will spend 10 years on probation after serving his 10-year prison sentence. On separate charges that he threatened to follow the judge home and shoot him as well as shooting him with a poisoned dart, Lebleu was found not guilty. ' RRF

Good, Bad, and Ugly are long-running items on the front page of the The Times of Acadiana's news section. In last week's edition, the paper misspelled Lafayette in the headline of its "Bad" item. ' SJ

Tsunami Sushi opened its second location on the sixth floor of Baton Rouge's Shaw Center For The Arts on March 5. Located on the top floor of the $55 million multi-use center, Tsunami carries over its contemporary design from the Lafayette restaurant and looks out over the river. The Shaw Center will also include Capital City Grill, PJ's Coffee House and Wine Bar, LSU Museum of Art, Manship Theatre, LSU School of Art Gallery, a digital studio, Brunner Art Gallery and several classrooms. ' EZ

Last week, a grand jury began hearing testimony in the investigation of alleged wrongdoing in the Opelousas Police Department. Questions as to how Chief Larry Caillier and former Maj. Ronnie Trahan handled $225,000 of federal grant money for bicycle patrols and other bookkeeping inconsistencies are at the heart of the investigation ("That Crazy Larry Caillier," Aug. 11, 2004). An audit by the State Legislative Auditor's Office released in January was highly critical of the department's handling of funds. Kris Wartelle, spokeswoman for state Attorney General Charles Foti, stated in an Associated Press story, "It's a wider, more complicated legal case than we ever thought, so we're coming back." ' RRF