A state-sponsored program to help low-income families build wealth is a saving grace for hurricane survivors still without a home. 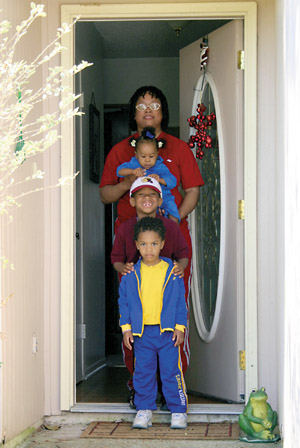 Short of an inheritance or hitting the lottery, building wealth takes time and patience. But if you start the financial journey with nothing ' no home, no belongings, no money ' the path is splintered with self-doubt and hampered by a lack of assets. Tracie Jackson, a Baton Rouge mother of three, had to dig out from that hole during a period when prayer was her only comfort.

Hurricane Katrina pushed Jackson, 37, and her young children out of their Westwego home and initially onto Interstate 10, where they were stranded with hundreds of others. She eventually made her way to Baton Rouge and, a few months later, moved into a nice family home in the suburbs off Siegen Lane thanks to a federal housing program.

It was only a temporary fix. As 2006 came to a close, federal officials arrived to reclaim their property but offered Jackson the opportunity to make the first bid. "We didn't have the money," she recalls. "I mean, we didn't have anything. I was terrified about my kids ending up on the street. We didn't have anywhere to go and housing has become so difficult to find around here."

The situation looked dire when her federal loan application was denied. The Road Home program could have helped, but it was moving at a snail's pace. That's when Jackson reached back deep for a Hail Mary ' a conventional loan from her bank. She didn't get it but discovered an innovative wealth-building program sponsored by the state that helped her close on her house in December.

Through the Department of Social Services and Southern University in Baton Rouge, the initiative matches participants with a bank to explore options for a savings account and to attend financial literacy courses. The program centers on the creation of an Individual Development Account, commonly referred to as an IDA.

IDA programs were originally developed in 1991 by Professor Michael Sherraden through his work at Washington University in St. Louis. Sherraden wanted to create a program that served low-income families on two levels: accumulating wealth and making strategic life choices. With the program's lofty ambitions, growth has been slow. Today, only 30 states sponsor IDAs and, over the past decade, federal and state governments have dedicated a meager $183 million to related initiatives.

The core element of Louisiana's IDA program is a special savings account that helps low-income families save money for a new home. Any money that participants place in their accounts is matched 4-to-1. Louisiana is above the national average in this regard and, due to savings constraints, a participant can walk away with as much as $5,000 in cash by completing the program. Jackson came up with her $1,000 in savings through a job at the local YWCA. Matching dollars are provided by the federal Temporary Assistance for Needy Families program.

Of course, $5,000 isn't enough to buy a house or even secure a home loan in most instances. That's why partnering banks offer financial literacy courses on building wealth, financing homes and living on a budget. Alexis Anderson, who over sees the program for LA DOTD Federal Credit Union, which serves Acadiana, says when Jackson coupled the training with her savings, it became worthwhile for the bank to take a leap. "It's not just about getting them married up to an asset," Anderson says. "It's about equity, and this is where the education can make a difference. We're not only opening a door for them, but helping them make valuable decisions."

The banking industry could become the face of IDAs in the future. According to a recent study by the Federal Treasury, banks are attracted to the program because it offers them opportunities to cross-sell a variety of other products. After all, successful IDA participants will eventually need additional savings and other credit products to secure their short-term and long-term financial goals. IDAs also bring new customers into banks, but, more important, they keep financial institutions in touch with nonprofit organizations and the community at-large.

It's an uphill battle. Last year, savings rate percentages dropped below zero as disposable income disappeared. To put it into perspective, saving percentages haven't been this low since the Great Depression. One in four Americans is asset poor; one in five has no assets; and upwards to 30 percent have never used a bank. It's no wonder financial institutions and state governments want to help people like Jackson.

The program is designed for working families with at least one dependent child and an annual income that is less than 200 percent of the national poverty level. In all, there's $2 million assigned to the program. About 200 people are enrolled and another 150 can come onboard, says Drew Murray, director of asset building programs at DSS. While anyone from Louisiana can enroll, a large number of participants are from areas devastated by Hurricane Rita in the Lake Charles region.

The fact that the storms have perpetuated the cycle of poverty for some Louisiana residents is among the many reasons IDA money has been confined to home ownership this year. If the state rallies for stronger levees and better flood protection but doesn't address the underlying causes of poverty, nothing will ever be accomplished. "It's such a crucial element in our recovery," Murray says, "but home ownership is also seen as a productive step toward helping working-poor families escape poverty."

Jackson says the IDA program was the only help she could find in Katrina's aftermath. She saved money and made an effort to build her assets, and now she's reaping the rewards. "I just wish there were more programs like this, something that thinks outside the box," Jackson says. "People are working hard to get back on their feet, but it doesn't always work. It takes years to get everything you have, but it's harder to get it back when you lose it. I was tired of pretending everything was OK for my kids ' but now it is."