Like certain celestial alignments the stars come together four times a year for the Nue Moon Revue at Blue Moon Saloon, and tomorrow is another one of those times. 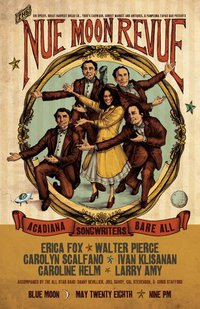 Nue Moon Revue was begun by Caroline Helm of the band The Figs as an eclectic showcase of local songwriters. The singer-songwriters are backed by a house band that includes Chris Stafford of Feufollet, Joel Savoy of the Savoy Family Band, Danny Devillier of FIGHTS and Cal Stevenson.

The invited performers set the tone which, according to Helm, could be vaudeville, folksy, cabaret, blues or Delta stomp.

This time around there are six artists featured: Nue Moon Revue host Caroline Helm, Ivan Klisanin, Erica Fox, Larry Amy, Carolyn Scalfano and some guy named Walter Pierce who just sounds like trouble, in the opinion of The Independent Weekly.

Special guests Miss Emily and the Collard Greens kick off the Nue Moon Revue at 9 p.m. May 28 at the Blue Moon Saloon.