How inconsistencies in Gov. Bobby Jindal's own fiscal philosophy have finally collided with a Legislature that's coming into its own. By Jeremy Alford

It was the day George Rodrigue came to Baton Rouge.

Usually, if you can catch him at his gallery in New Orleans or restaurant in Lafayette, a not-so-few bucks can buy you some signed swag. But there he was, in the Capitol rotunda dishing out autographs for lawmakers and a few tourists whispering things like, "Who is that?" and "That's the Blue Dog guy." 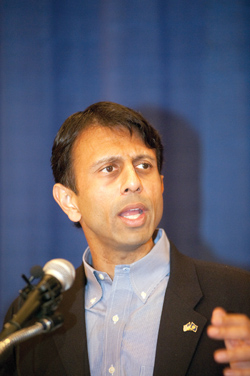 How inconsistencies in Gov. Bobby Jindal's own fiscal philosophy have finally collided with a Legislature that's coming into its own. By Jeremy Alford

It was the day George Rodrigue came to Baton Rouge.

Usually, if you can catch him at his gallery in New Orleans or restaurant in Lafayette, a not-so-few bucks can buy you some signed swag. But there he was, in the Capitol rotunda dishing out autographs for lawmakers and a few tourists whispering things like, "Who is that?" and "That's the Blue Dog guy."

Rodrigue was there advocating for arts funding, along with other artsy types. Rodrigue was also there for Gov. Bobby Jindal when a collector commissioned a painting of the gubernatorial family in 2008. Before finishing the job, Rodrigue gave Jindal the option of including the iconic Blue Dog near his wife's feet. Of course, Jindal didn't dare veto the Blue Dog from the painting, having been given the choice.

But when the Blue Dog Guy was at the Capitol last Thursday, there was very little he could offer Jindal in the way of assistance.

That was the same day lawmakers were slated to take up the state's $25 billion budget bill, as originally proposed by Jindal. Governors traditionally have the ability to ram their budgets through the process, or at least grease the rails, and lawmakers usually fold in the face of power.

This go around, however, Jindal doesn't have earmarks in the operating budget, so he doesn't have fresh meat to dangle over the heads of lawmakers to make them salivate. The crunch is so severe that, for the first time in recent memory, the budget is devoid of these pork nuggets.

And there's a current of resentment, some of it built up over the years, running underneath it all - more than one lawmaker recently has dredged up Jindal's broken promise of a legislative pay raise during his inaugural regular session in 2008.

The governor also has broken a campaign pledge not to use one-time monies on recurring expenditures - and that, too, has come back to bite him. By a 22-vote margin on May 23, the House adopted a resolution by Rep. Brent Geymann, R-Lake Charles, requiring a two-thirds vote of the Lower Chamber to pass any budget that includes non-recurring dollars.

Why is that a big deal?

Because Jindal proposes to cover roughly $500 million of next year's $1.6 billion budget shortfall with one-time monies.

Last Thursday, Geymann's resolution caused the House to shelve Jindal's budget after representatives voted 88-11 not to plug one-time monies into next year's budget. It was a clear sign that Jindal, whose team worked lawmakers feverishly during the floor debate, had lost more control than anyone had anticipated. Before the budget was finally advanced to the Senate just 24 hours later, representatives cut $81 million intended for a coordinated care network - and lawmakers cut it because they didn't believe Jindal's argument that it was tied $200 million in federal matching Medicaid money (there's even official House documentation and research contradicting the administration's claim).

While lawmakers complained that they were getting different figures for the cuts from the administration and the House staff, Rep. Page Cortez, R-Lafayette, urged his colleagues to stick with the wisdom of House leaders. "We could have spent another six months on this in committee and still not had a better understanding," said Cortez, a member of the Appropriations Committee.

One of the ringleaders of this new movement is Appropriations Chairman Jim Fannin, D-Jonesboro, whose budget-drafting committee also made deeper cuts than Jindal wanted. In response, the administration called the committee's action "irresponsible" and warned that five prisons would be shuttered, state troopers would lose their jobs and flu shots might be eliminated for senior citizens. Fannin's committee additionally plugged a few holes by raiding an economic development fund against Jindal's wishes.

As the one-time money drama further unfolded on the floor last Thursday, Fannin's fatigue showed. He was being tugged on one side by the administration and on the other by lawmakers unwilling to find a compromise between not inserting the one-time monies and finding the cuts needed to put the budget back in balance. "I'm stuck in the middle," Fannin said. His mood was a touch brighter, though, once representatives agreed on how to cut the budget last Friday. "We put it back together," he said in an obvious reference to the damage inflicted by the previous day's stalemate.

Fannin didn't do it alone. In his corner is House Speaker Jim Tucker, R-Algiers, who does have a working relationship with Jindal, as evidenced by the recent failed push to merge SUNO and UNO. That relationship, though, may be facing the same fate as the SUNO-UNO merger plan.

When the Joint Budget Committee decided to refuse a request by colleges to hike tuition, eliminating a $37 million pot of money from Jindal's budget, Tucker defended the move by challenging universities to prove that the last three years' worth of increases are paying off.

The speaker said scores from the so-called Grad Act indicating whether the standards have been met won't be ready until June or July, meaning the tuition issue could be a late bloomer - if it blooms at all. "We asked for some accountability in higher education and some performance standards be met before we move forward with an additional tuition increase," Tucker said. "And I think for many members that's an issue."

Based on other posturing, Tucker may be ready to take his anti-administration rhetoric to a new level with legislation to substantially trim state contracts. "The speaker told me it's a go," said legislative sponsor Rep. Dee Richard, No Party-Thibodaux. Richard added that Tucker may also put his weight behind a related bill that would cut positions in the executive branch.

Tucker said through a spokeswoman that he did meet with Richard earlier this month regarding the proposals and he had offered supportive words, but the speaker did not respond to an interview request. Tucker's office also confirmed that Treasurer John Kennedy, who has advocated for the initiatives in speeches around the state, took part in the meeting. Jindal, for his part, has never shown a willingness to warm to the streamlining ideas.

While it shows just how far Jindal and the House have drifted apart this session, all of it also serves as a preview of the uneasy detente the administration and lawmakers in both chambers will have to forge to produce a balanced budget by June 23, scheduled as final adjournment.

Hopefully, Rodrigue will be available then, too. Maybe he can paint a happy ending that's otherwise unattainable, or at least add a Blue Dog to whatever budget document is advanced.