Before the April legislative session, legislators and the governor should ask voters how the state should spend its windfall. No matter what, the people will weigh in next fall. 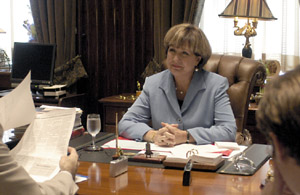 In case you haven't heard, poor Louisiana is seriously strapped with more megabucks than it ever thought possible. We're talking serious wealth here ' probably more than $2 billion this year alone ' the equivalent of what FORBES magazine theorizes was once held by everyone's favorite dictator, Saddam Hussein. Favorable energy prices and recovery spending are the leading causes, but the implications of the state's newfound prosperity have yet to sink into the collective psyche of the body politic.

It's an unprecedented bonanza that follows an unparalleled disaster. Perhaps because of hurricanes Katrina and Rita, it's easy to forget that we've been in this position before. Oil and gas revenues represented 41 percent of the state's cash flow in 1981 and 1982, when the fabled boom yielded a $1.6 billion surplus. Those were heady days, epitomized by a freewheeling style of politics that put little emphasis on fiscal accountability. Of course, the boom quickly turned to bust and the money vanished, having been frittered away when there was plenty of it to go around. Among the few legacies remaining from those days are bitter memories of an opportunity lost, a piece of history we may be doomed to repeat.

The December special session was as desperate as it was telling. Gov. Kathleen Blanco called it hastily, almost as soon as she realized the extra dollars were there, and without much advance planning with her key legislative allies. A transparent wish list in the form of an official agenda was thrown together and politics trumped public discussion as Blanco apparently looked ahead to her re-election campaign. It didn't take long for her top allies to desert her. In the time allotted to the session ' a mere 10 days ' what else could she have expected? The result was foreseeable yet unacceptable.

As the year turns anew, the communications breakdown doesn't appear to be getting any better.

If the billions in new money are so important, where is the appeal for public input? When and where are the town hall meetings? Why aren't state legislators using their taxpayer-funded office expense accounts to reach out to residents through mailers or other means? Thus far, the only direction has come from the same old sources ' press releases from a few elected officials, special interests and think tanks. And they don't all agree. Something has got to give; an intense public debate needs to be held statewide before the Legislature meets again in late April.

The Public Affairs Research Council, a Baton Rouge-based nonprofit that monitors the activities of state government and issues policy papers, describes the December effort as a "waste" that "failed to allow for sufficient planning." The best outcome identified by PAR is that the session may act as a catalyst for further debate. Oddly enough, the group also tagged $239 million in tax credits passed during the session for insurance surcharge reimbursements as "unnecessary." They will cost an estimated $56 million to $82 million annually, PAR argues, and there is no long-term benefit to the credits. PAR also claims the credits will do nothing to solve the crisis of insurance affordability.

C.B. Forgotston, a Hammond attorney and political activist who has an immense following online, pounced on PAR in one of his opinion columns. The tax credit does nothing to exacerbate the current insurance crisis, he says. It simply makes private insurance purchased by homeowners and businesses slightly more affordable. "PAR has belittled the amount that each policyholder would receive from the credit as not much money," Forgotston says. "It may be a surprise to PAR, but the amount of money involved means a lot to middle class families and small businesses." Largely, however, Forgotston slammed the nonprofit for not offering any solutions to the problem.

That divide underscores a larger dilemma, which Dan Juneau, president of the Louisiana Association of Business & Industry, an influential statewide lobby, refers to as the "us factor." During the recent carnival of riches, those in seats of power forgot those for whom they spend the state's money. "Remember us?" Juneau asks. "We are the folks who go to work every day and add value to life in Louisiana. We run small businesses, work shifts, raise our kids, dote on our grandchildren, and pay the sales taxes, income taxes, property taxes, and fees that have fed the huge growth in the state budget during the last decade."

The only statewide survey showing how real people might feel about spending priorities can be found in the 2006 Louisiana Survey, conducted by LSU's Manship School of Mass Communications. Conducted over the course of 20 days in October, the survey interviewed more than 1,000 Louisiana adults. Compared to 2005, the preferences didn't change much. Residents express support for spending across a range of government services, as long as they're not taxed to achieve it. They are particularly supportive of spending on education, public health, roads and infrastructure. Not surprisingly, an overwhelming 81 percent believe the state should increase spending on recovery. The biggest leap was a 10-point spike in support of efforts to battle coastal restoration; 74 percent favor pouring more money into such efforts.

While that survey offers a few general guidelines, Louisiana needs something more to make the critical choices it now faces. The public should not be ignored. If voters aren't given a chance to say how the money should be spent between now and April, they'll surely get a chance to chime in next fall, when the elected decision-makers ' from the governor to the Legislature ' will be seeking re-election.

At that point, in contrast to an old adage, forgiveness may not be easier to get than permission.