Insurance relief and state construction money has caused a new breach in the historic divide between northern lawmakers and their southern counterparts. 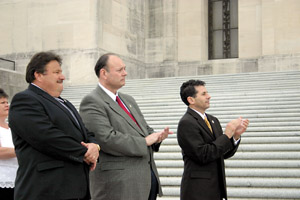 Behind the committee table ready to testify is a balding Cajun hellbent on nickel-and-diming the state for every levee, flood gate and canal lock its coffers can support. He's an old-school Democrat, mais cher, a staple of the time-honored courthouse gang that carries on breathlessly in French over endless cups of Community Coffee. Terrebonne Parish Sen. Reggie Dupre tells the Senate Finance Committee that he was a coastal crusader before "coastal was even cool," which is true. He was the Senate's first real coastal floor leader under former Gov. Mike Foster, strapping life preservers on his portly frame during speeches about land-loss. Today, he does the same for Kathleen Blanco, only without the orange jacket and in a slimmer form, having shed several suit sizes.

As he has done every year since being elected in 1996, Dupre is pushing a set of bills during the ongoing session that chips dollars off existing sources to bankroll the coast. One such measure creates the Louisiana Coastal Protection and Restoration Financing Corporation, which would allow the state to borrow about $500,000 immediately against an expected increase in oil-and-gas royalties. Another bill would slowly boost the annually-dedicated $25 million from mineral resources for coastal activities, siphoning some cash away from roads. "I know all of that sounds like a lot of money," Dupre tells the committee with a smile, "but remember that the [state's coastal master plan] is $50 or $60 billion."

Directly across from Dupre in the committee room sits the glaring Sen. Joe McPherson, a profoundly mustached Democrat from Rapides Parish ready to pounce with his Mayberry twang. A successful businessman back home in Woodworth, McPherson is a stickler for numbers. He also has a military presence he isn't afraid to use. McPherson has been bearing down on Dupre's funding proposals ' the money, not the concept ' arguing north Louisiana isn't getting a fair shake. "You always take the cream off the top for coastal restoration," he barks at Dupre. "You should be able to build a wall around Montegut with all the money you got. You're not giving up."

The issues that have traditionally set lawmakers from the piney woods of north Louisiana against those from the swamps and bayous of the south amount to an ancient political rivalry ' Protestants in the north, Catholics in the south, conservatives against liberals, urban opposed to rural and so on. In the wake of the 2005 hurricane season, the debate manifested itself in matters of coastal restoration, construction and insurance relief, especially during the legislative session.

With the state's recovery still limping along, the animosity could grow worse before it gets better. Northern lawmakers could become more vocal, creating a legislative civil war over regional funding and priorities. Some coastal lawmakers were clueless last week when dozens of Shreveport residents stormed the Capitol to rally for I-49's northern construction, mainly because they were only tracking the southern portion. Likewise, northerners asked very few questions ' if any at all ' during the session's hearings on the state's landmark plan for the coast. Even Blanco admits the enmity and ignorance is troubling, and could grow increasingly bitter. "There's always that possibility, but that's why I pay attention to the needs of north Louisiana," she says, adding northern priorities hold as much weight on her desk.

The territorial grudge match resurfaced again when both chambers of the Legislature voted on bills to ease the burden caused by ever-increasing insurance rates, especially for hurricane-prone parishes. House Bill 962 by Rep. J.P. Morrell, a New Orleans Democrat, proposes to cut the rates that Louisiana Citizens Property Insurance Corp. charges to policyholders in parishes with a majority of residents using the state-run insurer of last resort. In short, there would be very little relief for residents above the Mississippi line. "People in north Louisiana, which no one seems to care about, are paying higher rates than anyone," argues Rep. Rick Farrar, a Pineville Democrat.

Meanwhile, Senate Bill 242 by Sen. Walter Boasso, D-Arabi, would establish $500 million in refundable tax credits aimed at residents and businesses still recovering from the 2005 hurricane season, or those forever preparing for the next disaster. Some worry the bill will position Citizens to actually become more competitive, forcing up rates for parishes with fewer policyholders. "(The legislation) is an incentive to get more and more with Citizens," says Rep. Kay Kellogg Katz, a Monroe Republican.

On the community level, where sentiment becomes action, Dr. Jeffrey D. Sadow, an associate professor of political science at Louisiana State University in Shreveport, says "barely anyone up here even knows all those different bills are out there," but voters in the region are scrutinizing funding for roads like I-49. There has also been a bit of grumbling amongst local officials, he says, over the state's new building codes, which impose stricter guidelines on every parish, whether they border Texas or saltwater. "'Why should we have to pay for everyone else?' is one of the questions I hear," Sadow says.

Could the sentiment snowball and head in another direction? "If it so happens, when all is said and done in the coming weeks and session is over, there's a perception that nothing was done on I-49 or anything else, that is something that could very well turn into an election issue this cycle," he says.