A new coastal map produced by the National Wetlands Research Center in Lafayette has a variety of applications locally and worldwide.  By Jeremy Alford

There's an adage among geographers that you can't manage the landscape without measuring it first. That's very true of Louisiana's coastal wetlands, which bear the brunt of 90 percent of the land loss suffered by the continental U.S. 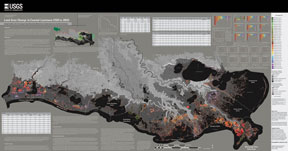 The USGS' exhaustive analysis of Louisiana's coastal loss since 1932 takes into account
myriad factors - from hurricanes to muskrats.

A new coastal map produced by the National Wetlands Research Center in Lafayette has a variety of applications locally and worldwide.  By Jeremy Alford

There's an adage among geographers that you can't manage the landscape without measuring it first. That's very true of Louisiana's coastal wetlands, which bear the brunt of 90 percent of the land loss suffered by the continental U.S.

And it was with this in mind that the National Wetlands Research Center in Lafayette produced an unparalleled, multi-layered topography system that not only accurately depicts Louisiana's coast, but also shows 78 years worth of shoreline activity.

The resulting map and research data yielded by the project were released to the public last week and republished by dozens of print, broadcast and online outlets around the world. Here's a literal snapshot of the headlines still being rolled out: The seventh largest delta on the Earth's surface has experienced a net loss of 1,883 square miles since 1932.

That delta, of course, is Louisiana's sprawling wetlands, which have also experienced a decline in rate of land loss over the past 25 years, due chiefly to renewed interest in public advocacy and taxpayer-funded coastal restoration and protection.

D. Phil Turnipseed, director at the local center, says the emerging government-led industry that is inventing new forms of engineering to add infrastructure to Louisiana's coast requires such a map.

Among the map's most unique features is that it shows areas that have lost land since 1932 and explains, for each point in history, why land was lost, whether it was from a storm, oil activity, natural subsidence or other factors. "We believe this map will help the decision-makers and the agencies that are strapped with the responsibility of having to look at this loss," Turnipseed says. "We believe it will be a great restoration tool."

The significance of the new map is all about timing - previous studies have analyzed land change in coastal Louisiana before, but many are now out of date, provide data for limited time periods and almost all neglect to explain how and when losses occurred. Under the leadership of Turnipseed and with the resources of the U.S. Geological Service, the map was constructed by more than 150 engineers, programmers and ecologists.

Turnipseed describes it as a fitting undertaking for such a massive challenge - both for the state and country. "This is a continental issue," he says. "It's a continental tragedy."

When the USGS, which oversees the wetlands center, presented the map and related findings to the state lawmakers last week, some members complimented Turnipseed's team on the unique methods used. Primarily, the project team relied on historical surveys, aerial data, personal interviews, satellite data and more to track landscape changes.

Others on the Joint Natural Resources Committee, meanwhile, asked Turnipseed why he limited his research scope. "I have a 95-year-old trapper in Larose that tells me that the oilfield contributed to the erosion, but it started with a four-legged varmint - and not a nutria, the muskrats," said Rep. Jerry "Truck" Gisclair, D-Larose. "The muskrat was a root-eating varmint. The nutria ate the greens."

Gisclair urged the federal government to begin interviewing other sources, like trappers. "You hit it right on the head," USGS geographer Brady Couvillion told Gisclair. "It's the roots holding onto the soil that help prevent erosion from happening."

In building the map, the wetlands center was able to extrapolate some new twists to data you've probably heard before. Like the fact that today, Louisiana loses one football field every hour. "There was a time when we were losing a football field every half an hour," Turnipseed says. "It has declined over the last few years if you take out the fact that we have four or five of the most severe hurricanes to hit the north American coast."

This newly readjusted statistic doesn't even take into account those areas that have converted to water but have not yet exhibited the persistence necessary to be classified as "loss."

Still, even with indeterminable factors, trend analyses by the wetlands center show that from 1985 to 2010 there was a wetland loss rate of 16.57 square miles per year. "If it was a constant rate, we would be losing about the island of Manhattan annually," Turnipseed notes.

The USGS study also tracks Louisiana's historic river levels. While the flooding presents its challenges, the event is also pushing sediment-rich water into the state's marshes. This results in the building up of land - the antithesis of coastal erosion.

But there is bad news: The sediment doesn't always go where ecologists and biologists think it should, Turnipseed says. Science and technology helps, but Louisiana's infrastructure isn't quite ready to accommodate such a flow at this very moment. "It's unfortunate to see both the land loss rate and the potential that's being lost," says Jerome Zeringue of the Governor's Office of Coastal Activities. "You look at all that sediment that could be used as a positive. Take advantage of the situation, but we don't right now. We don't have the ability to do that right now."

On the horizon, Zeringue says the state is working with the U.S. Corps of Engineers on a variety of projects that could soon help Louisiana push those valuable sediments into all the right places.

Not surprisingly, the crown jewel locally is the Atchafalaya River Basin. Always rich with sediment, it's the only area in coastal Louisiana showing increasing land, but the rate of growth in this one basin is not sufficient to offset the losses coast-wide, particularly in years of increased hurricane activity.