Waiting in the shadow of the Superdome. 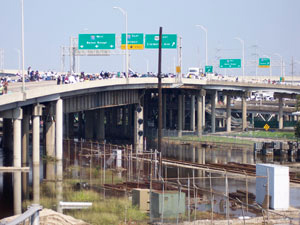 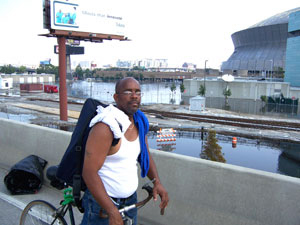 Late Thursday afternoon, Aug. 31, three days after Hurricane Katrina flooded New Orleans, about 2,000 people are gathered on the bridge above floodwaters at the intersection of Highway 90 East with I-10 facing the northwest corner of the Superdome. The oaks and pines hanging over the canal formerly known as West Stadium Drive appear undamaged after the storm. The water surrounding the Dome is pale brown and placid in the late afternoon, except when someone wades through it. Guardsmen on break are relaxing on the veranda directly across from the bridge; a woman dressed in a brown T-shirt and fatigue pants waves when she sees a camera.

The people on the bridge have so far survived the post-Katrina flooding, and they have made their way to the bridge ' swimming, wading, walking, being dropped off by rescue boats ' to await evacuation from the city. They are full of questions about their future and the future of their city, but the question they ask most often is, "Where are the buses?"

They were directed to this point to be picked up by buses that have never come. They can see buses going into the Superdome, the primary evacuation center, and helicopters are carrying out medical airlifts from a makeshift landing zone on a Dome patio right across the canal in front of them. But many up here now believe they are waiting in the wrong bus terminal.

Several of them were inside the Dome but found the conditions so deplorable that sleeping outside in the open air on concrete seems a better choice. Sharon Robinson, washed out of her home on Lafreniere Street near Gentilly Boulevard and Dillard University, has spent two days on the bridge ' "two days too long," she says. Her 4-year-old is sick with a fever, and her diabetic grandfather is too weak to walk. She is angry at the lack of relief promised by public officials. She cries as she walks away to rejoin her family.

Nearby, Joyce Hyde and her husband and son have found a spot next to the railing to spend the night. Joyce says they only left their home on North Miro Street today, when the city shut off the water. "I was in Los Angeles for the earthquake, New York for the World Trade Center bombing, and now New Orleans for Hurricane Katrina," she says. "I will get through this one, too."

So begins another night on the bridge. A police outpost has been set up nearby. The police merely look on, offering no information or assistance. While rumors circulate of chaos in the Dome, there is no violence or unruliness on the bridge.

Meals and bottles of water are provided, but no toilets. People have been walking down the ramps to relieve themselves, but as night falls they stay clustered in family units, reluctant to wander away in search of privacy. At 8 p.m. a convoy of buses comes through but does not stop at this station. Some people are spending their fourth night on the bridge. Word gets around that more buses will be coming soon.

Saturday morning, 36 hours later, the buses have still not arrived. The crowd is slightly smaller, as the more able-bodied have walked down the expressway to the Convention Center or waded into the Dome, but the ones who are left are angry and desperate for help. They are not only the poorest of New Orleans' poor but also the least mobile. They are the elderly, the babies and children, the disabled, the near-dead and the men and women who have stayed to protect their families.

Police zip from one spot to another in convoys of SUVs and pickups, their automatic weapons at the ready. They honk and yell, "Get the f'k out of the way"; otherwise they have nothing to say. A woman says, "They think we're the enemy."

Most of these people, like Alice Franklin, have been out on the street for five days. "Buses never stop for us," she says. "There are no toilets, not enough food and water, and dead bodies floating in the water." They are sick, exhausted and severely dehydrated. Food and water have run out, police have disappeared, and the midmorning sun is baking everyone dry. When a few bottles of water are delivered, young women in the crowd fight over the water.

A middle-aged black man walks by. He has spent five nights on the bridge and is walking to the Convention Center. "I got tired of waiting to be rescued," he says.

Ricky Brown, who waited through the storm in Baton Rouge and then walked to New Orleans to try to find his family, is now trapped on the bridge. He finds a bicycle and plans to ride over the Crescent City Connection, around to Airline Highway and all the way to Baton Rouge. He will be 47 tomorrow. "I don't want to spend my birthday on this bridge," he says.

A convoy of a dozen police vehicles pulls up, and one officer leans over the railing to shoot at a water truck on the ramp below, firing seven rounds in three bursts. "The men in the truck were going around offering water but actually raping and killing," another officer explains. No one appears to be hit. The men run off, and the police drive away. Some in the crowd say the men in the truck were just delivering water. Who knows? One of the few white men in the crowd says, "The police did not help us. The federals dropped the ball. The state dropped the ball. The city doesn't have the resources."

Government failing them, families and friends do their best to take care of each other. Around 11 a.m. half a dozen New Orleans police set up another outpost just beyond the interstate highway signs. A few minutes later a 15-man squad of National Guard Special Forces under the command of Master Sergeant Carl Baker of Tampa, Fla., arrives. Sgt. Baker tells the senior N.O.P.D. officer, "We are going to take control of this city today."

Within the next half hour, the troops set up a landing zone for helicopters to evacuate the neediest people on the bridge. Mazerow Ratliff, one of the countless Ninth Ward residents on the bridge, has stayed with his girlfriend and her son, 7-year-old Eric Mukhtar. Ratliff picks up debris to clear the zone.

The trash is both official ' brown M.R.E. wrappers, snack foods, juice and water bottles of every size ' and personal, mostly clothing, medication, bedding and whatever valuables could be stuffed in plastic bags as people fled their homes. They have discarded nonessentials day by day. Some wait now completely empty-handed.

The first evacuee is a gray-haired, one-legged black woman, eyes barely blinking, wrapped in a urine-soaked comforter. Her family drags her to the helicopter on a sled made of tied-together water cartons. The sled goes back for another load ' an unconscious older man. Others come forward in shopping carts, wheelchairs, anything that will roll ' like Annette, who has been off dialysis for a week and has to be rolled to the helicopter in an office chair.

With no EMTs, aid workers or rescue personnel on site, other private citizens and a handful of military personnel do the loading. The law enforcement officers on site do not lift a hand to help anyone.

Over the next three hours, in two parallel landing zones on either side of the median, Sgt. Baker's troops oversee the helicopter airlift of 200 of the sickest evacuees and their family members to the airport. Some are too dazed to speak. One old thin black man ' who must be 90 years old ' hobbles along with his cane, refusing assistance until he cannot make the step up into the helicopter. "Thank you. Thank you for helping," some say, with tears in their eyes, so relieved to be leaving this concrete hell.

People wait in two long lines along the railings, looks of pain and resignation set on their faces. They are grimy in ways unimagined seven days ago. They smell of sweat and urine and worse. "Finally," Alice Franklin says, "I'll get some cold water, a shower ' and maybe some mashed potatoes."

They cannot believe it has taken so long to find the 50 buses needed to take them all to safety. Empty ambulances and supply trucks continue to roll by, and truckloads of police cruise through like big-game hunters on safari with rifles and cameras ' in air-conditioned comfort. A mile-long convoy of rescue and emergency vehicles has passed through the crowd earlier. The road to the bridge is clear all the way to Baton Rouge. Why is it easier to find helicopters than buses?

By 2:30 p.m., the worst of the sick ' or at least the ones who have family or friends to speak up for them ' have been removed from the bridge. A convoy of six school buses led by Louisiana State Police Sergeant Eddie Lewis arrives. It takes 200 more people off the bridge. The other major collection centers ' the Superdome, the Convention Center and the Causeway ' are empty by now, but several hundred people are still standing in two lines under the broiling afternoon sun. Five days after Katrina left town, they are waiting for the bus that will remove them from the bridge and deliver them from the disaster that is New Orleans.

Burk Foster is retired from the Criminal Justice Department at UL Lafayette and was on assignment with Swiss journalist Jean-Cosme Delaloye in New Orleans after Katrina. He can be reached at [email protected].