One of the most trendy things in dining right now is food found on four wheels. 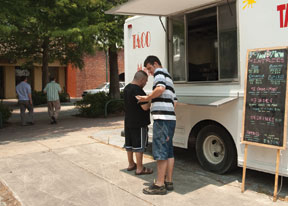 A temporary Taco Mama truck (equipped with a
generator) is operating in a vacant lot on the 500
block of Jefferson Street downtown for lunch Monday
through Friday. Once the city runs electricity to the
lot, the regular, more colorful Taco Mama truck, which
for the last several months has operated in the old La
Promenade Mall lot on Johnston Street, will move
into its place. Taco Mama will continue to serve on
Saturdays at the Johnston Street location.

Mobile food vending is a trend that has proven itself to be beneficial to everybody. The owner can start up a company based out of a truck for peanuts compared to a traditional brick-and-mortar restaurant and the public can find the truck of their choice easily with social networking as a map.

Shannon Wilkerson, owner of college staple hangout The Bulldog and former Lafayette nightclub impresario, owns the food truck called Taco Mama that has been gaining followers and praise for the past several months. As of this week, Wilkerson is setting up shop on the 500 block of Jefferson Street in downtown Lafayette, in fact a few steps away from our paper's front door.

Anyone who has been downtown more than twice in the last five years remembers the sign advertising future condos being built in the lot between Cajun Spice and Parc du Lafayette (that is the tiny, picturesque park with benches and a gazebo - did you know it had a name?). This is where Wilkerson will be offering up his Mexican fare for the forseeable future.

Curious about food trucks, how they work and what it takes to find one or start one up yourself? Check out Wednesday's Independent Weekly cover story to learn about all that and who is driving around Acadiana offering up food these days.