Don Cravins Jr. is in and Chris Williams is on the fence in the upcoming race to replace state Sen. Don Cravins in the state Legislature. 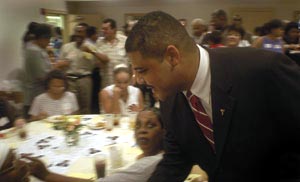 With a possible special election early next year, Don Cravins Jr. has thrown his hat in the ring to succeed his father in the state Legislature.

Dispelling rumors that he may be planning a run for St. Landry Parish District Attorney, freshman state Rep. Don Cravins Jr. says he hopes to follow in the footsteps of Don Cravins Sr. "I'm definitely running for the state Senate," Cravins Jr. says. District 24's reach into north Lafayette is a major factor for him, since he has several ties to the area. Cravins Jr. graduated from Teurlings Catholic High school and now works for the downtown Lafayette law firm Domengeaux, Wright, Roy & Edwards.

"It's an opportunity for me to represent more of the people I'm connected to," he says.

Cravins Jr. adds his father has "encouraged me somewhat, but he understands it's got to be me and my family's decision."

"He'd like to see someone succeed him who will carry on some of the issues important to him, like juvenile justice and helping small business people," continues Cravins Jr. "I think that's his biggest concern. Particularly if he's elected mayor [of Opelousas], he'd like it to be someone he can work with and someone who's going to continue to help build an economy in St. Landry Parish."

Cravins Jr. will face off against north Lafayette state Rep. Wilfred Pierre, who has already begun fundraising and announced his intentions to run for the District 24 seat. Pierre, who was first elected to the state Legislature in 1992, is prevented by term limits from seeking re-election to his District 44 seat in the state House of Representatives. Prior to being elected to the state Legislature, Pierre served as a longtime Lafayette city councilman.

Another potential candidate eyeing the race, Lafayette City-Parish Councilman Chris Williams, says he remains undecided about running for the Senate or making a bid to replace Wilfred Pierre in the state House. (Williams also is prevented by term-limits from seeking re-election to the city-parish council.) Williams is awaiting the results of a poll on his potential candidacy, which should be complete by mid-May. He may not announce any campaign until after this summer.

One potential issue for Williams may be his job as vice chancellor/provost with the Louisiana Technical College, a position he has held since 2001. The job is being eliminated June 30 as part of a Louisiana Community and Technical College System reorganization plan. Williams says he plans to apply for a new regional director's job.

Brett Mellington, first vice chair of the LCTCS board, says the college system discourages employees from running for state office because of the amount of time legislators must spend in Baton Rouge.

"[The board] has talked about that," Mellington says. "It's an issue for us. We probably cannot prevent someone from running, but the key is going to be that they [maintain] a full time job [with LCTCS.]"

LCTCS' policy for "engagement in political activity" states that an employee who runs for or holds political office must maintain his or her normal hours and workload. If this proves to be an issue, the policy notes that "annual leave or leave without pay may be requested for the appropriate period of time." There are no state regulations preventing public university employees, who are not classified under civil service, from running for office.

Both Williams and LCTCS President Walter Bumphus say they are unaware that the board has an issue with employees running for state legislative office. Williams has served as a city-parish councilman since 1992, almost a decade before starting his job at the local technical college.

The District 24 state Senate election is scheduled for October 2007. However, state Sen. Cravins is widely considered the frontrunner in the race for mayor of Opelousas. If Cravins wins Opelousas' Sept. 30 mayoral election, he would have to step down from his post in the state Senate by the end of 2006. This would prompt a special election for the District 24 Senate seat, probably for early next year, prior to the April legislative session.