The number of independents in Louisiana has ballooned over the past decade, but will these voters play a stronger role in the election process? 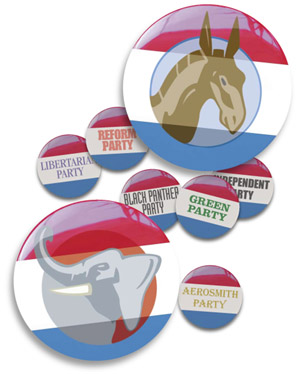 Mainstream candidates rarely know how to approach them, a vast majority don't have a national platform, and all serve an unappreciated role in the American election process. Over the past 10 years in Louisiana, hundreds of thousands of voters have made the switch. Today, there are nearly 610,000 independent registered voters in the state that have no affiliation with elephants or donkeys. That's up from 360,000 in 1997, when Ross Perot's Reform Party was reaching its peak in popularity.

In the election game, this shapeless mass is referred to as simply "The Others." But the tag can be misgiving, especially due to the sector's growth in recent years. In Lafayette Parish, where Republican registration has made record gains, there's been a healthy increase in independents. During the most recent statewide elections last year, the number of registered independents skyrocketed to 32,000, with 6,600 casting votes.

That's a huge jump from less than a decade ago. According to post-election statistics from the Secretary of State's Office, roughly 453 independent voters were registered in Lafayette Parish in 1998, and only 17 voted.

While independents in Louisiana aren't yet closing the gap with the 1.5 million registered Democrats, they have only 83,500 fewer members than the Republican Party. Regardless of their standing, independents are rarely tapped for judicial appointments in the state or asked for input by the administration. Additionally, political scientists focus more on voting behaviors in their research than party identification. It's just one of the many factors that makes it difficult to judge the impact of independents in Louisiana, says Ernie Roberson, a Caddo Parish native who became Louisiana's first nationally certified registrar of voters in 1999.

When the National Voter Registration Act was adopted 14 years ago, making it easier for people to become voters through offices of motor vehicles, Web sites, libraries, and other means, many hurriedly signed up and left their party affiliation blank, says Roberson, thus making them an "other" on the rolls. "The biggest surprise we saw in those early years was how many people just didn't pick a mainline party at all," says Roberson, who has served on two federal election task forces. "That's what makes them difficult for candidates to approach. That's why neither of the parties can make headway in getting converts. It's so hard to measure because there's so much we don't know about them."

Furthermore, there are countless studies about registered Democrats and Republicans who consider themselves independents but have never switched over. That comes as heartening news to Michael S. Wolf, secretary of the Louisiana Libertarian Party. Arguably the most active independent party in the state, Libertarians constantly run candidates for statewide office and Congress ' 24 contenders since 2000 ' but they're placing a larger focus on state legislative seats this year. The move could prove to be a boon for the group's grassroots structure.

With more than 2,500 voters on the rolls, Wolf says the Libertarians ' along with the Green and Reform parties, which are also recognized by the state ' offer independent voters a place to call home. It's the surest way independents can unite their voice for a difference to the status quo, although quite a bit of romanticism can be placed in standing firm and being autonomous. "Parties in Louisiana have historically been futile, but that's changing," Wolf says. "Voting has been about relationships and personalities. Everybody had to join a team, but there are alternatives."

Candidates running as independent were allowed to place their party's name near their own on ballots for the first time last year, as long as their party met certain criteria ' at least 1,000 registered voters and a presidential candidate that pulled down 5 percent in a recent statewide election. Many groups, such as the "Independent Party," didn't make the cut when the law took effect in 2005 due to its 30,000 members. Neither did the Black Panther Party or Aerosmith Party, which didn't get many members to walk its way.

For generations, the state's unique open-primary system has encouraged more independent candidates to run. But starting next year, Louisiana will revert to the closed-primary system for congressional races. Whether the two parties will allow independents to vote in their primary is unknown ' they could get shut out. Additionally, Republicans look likely to capture the state House of Representatives, narrowing perspectives ever further, and voter rolls are still in disarray following Katrina and Rita.

Wolf isn't convinced the new primary system will set back non-affiliated voters, but he's holding off judgment until the 2008 election cycle wraps up. Dr. Robert Hogan, a professor of American politics at Louisiana State University, says the independent movement in Louisiana over the past decade can't be ignored, but the next few years may really define the political undercurrent of this state. "The congressional races are changing, the Legislature is in play, and Katrina is still upsetting the applecart," notes Hogan.