In the wake of a devastating family tragedy, Brian Murphy fights his way back from a physical and neurological abyss. By Heather Miller

Sitting on a bench overlooking Girard Park's pond in late April, Brian Murphy dons a receptive smile and speaks with notable ease as he discusses his hobbies, goals and other basics. Not far from Brian's feet is Xander, his adopted terrier, fervently eyeing the ducks waddling by. 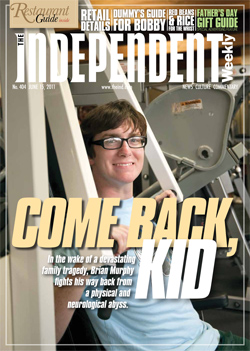 **One year ago this week his family's dream trip to the soccer World Cup in South Africa turned tragic, leaving his sister dead, another sister injured, and him suffering from traumatic brain injury. The Independent reports as Brian Murphy fights his way back from a physical and neurological abyss. By Heather Miller - Photos by Robin May
**

Sitting on a bench overlooking Girard Park's pond in late April, Brian Murphy dons a receptive smile and speaks with notable ease as he discusses his hobbies, goals and other basics. Not far from Brian's feet is Xander, his adopted terrier, fervently eyeing the ducks waddling by.

Aside from a calcium deposit in his knee that for Brian feels like an extra knee cap, his overall physical appearance, jovial voice and steady conversation make it hard to fathom that eight months ago he was wheelchair-bound and couldn't tell you what year it was without first looking to his father for the answer.

On June 16, 2010, Brian, a 20-year-old Lafayette native and 2009 St. Thomas More grad, was with his father, Danny, and three of his five siblings in Capetown, South Africa, where the family of soccer fanatics had traveled to the World Cup. The heartbreaking events that unfolded a year ago made headlines worldwide, sparked an outpouring of fundraising and support here at home, and launched Brian on a rigorous recovery from a traumatic brain injury that he continues to overcome today.

The Murphys were at a concert in Capetown when one of Brian's sisters, 17-year-old Danielle, grew tired. Dr. Danny Murphy, an emergency room physician who also works for the Lafayette Parish Coroner's Office, accompanied his youngest daughter back to the hotel; Brian and his two sisters, 24-year-old Nicole and 20-year-old Kellie, stayed behind. 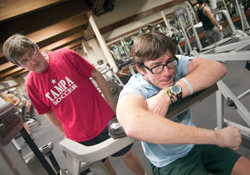 Brian and Danny Murphy work out three times a week at Red's, a key component of Brian's recovery.

While walking back to their hotel, the three siblings were struck by a suspected drunken driver, instantly killing Nicole, an Army reservist and former University of Tampa soccer standout who had just completed her second year of medical school at LSU in New Orleans. Kellie, a senior fixture on the LSU women's soccer team, sustained minor injuries, but Brian's condition was critical.

He suffered four fractured bones, a subdural hematoma and a diffuse axonal injury, or as his father explains, "bleeding and a bad bruise" on his brain. He was in a medically induced coma for more than two weeks, finally leaving South Africa July 10 on a medical jet costing hundreds of thousands of dollars that insurance wouldn't cover. An influx of donations and fundraising efforts made it possible to bring Brian home, but even that milestone was only the beginning of his grueling journey to come.

"What do I remember? Nothing really. Nothing at all," says Brian, who had just finished his first year as a biology student at LSU when the accident happened. "I don't remember being there. I wish I did." 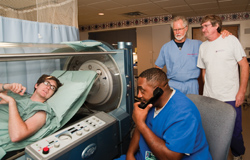 Brian Murphy, from left, talks to Marcus Onezime, a hyberbarics staffer at LGMC, through a special phone in the chamber while Drs. Matt Holden and Danny Murphy chat in the background.

After spending a week at Our Lady of Lourdes Hospital, Brian was transported to a specialty wing at Touro Infirmary in New Orleans, a hospital he would call home for eight weeks.
It was months before Brian even learned of his sister's death.

"It wouldn't have done any good to tell him before," says Danny Murphy. "His short-term memory was a few minutes long."

Brian's return to Lafayette signaled the start of intense speech, occupational and physical therapy three days a week, coupled with workouts three times weekly with his dad at Red's. His physical injuries were healing quickly, but his extreme memory loss was a frustrating roadblock for a young man trying so hard to fully recover and return to a normal life, much of which he can't even recall.

"It's like going to hell and coming back," Brian says. "That's the best way I can describe it. I have no memories from LSU. I just know I went to school there."

Brian's story, however, was approaching a new chapter of uncertainty, one that he and his family were determined to bring to a happy ending. 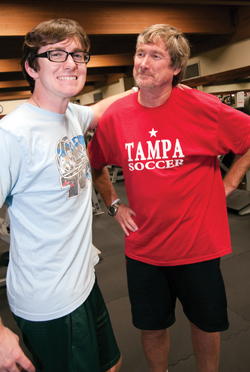 About a month after Brian was back in Lafayette, his father, who has since given up his work in the emergency room to care for his son, received a phone call from longtime friend Dr. Matt Holden. A former emergency room doctor, Holden oversees the hyperbaric oxygen therapy unit at Lafayette General Medical Center. HBOT is typically used to treat wounds, crushing injuries and the occasional diver suffering from decompression sickness. Patients are given pure oxygen through a sealed chamber that's highly pressurized; the super oxygen they inhale helps to spawn new blood vessels, prevent cellular death and expedite the overall healing process, Holden says.

But more recent experimental treatments have shown, particularly with soldiers returning from the Middle East, that HBOT can also be administered to improve brain function for patients with traumatic brain injuries. Paul Harch, a New Orleans doctor spearheading the HBOT brain injury studies through his private practice, is seeing "dramatic benefits" for soldiers undergoing the treatments, Holden says.

So after a bit of research, Danny Murphy decided to take Holden up on his offer to add yet another form of therapy to Brian's already full regimen.

The first traumatic brain injury patient to try HBOT therapy at LGMC, Brian began his first round of 40 sessions in late October - and the signs of improvement were almost immediate.

His short-term memory, though it still slips from time to time, was on the up-and-up, so much so that his therapists suggested he take a course at UL Lafayette. He enrolled in an audited, or not-for-credit, visual arts survey class in January, still undergoing HBOT and religiously attending his other therapies.

"I'm glad to be on campus, getting some school down at least," Brian said in April before the semester ended. "I understand that I can't take care of myself well enough yet to go back to LSU."
When his first 40 HBOT sessions were complete, the plan was for Brian to take a break from the therapy and eventually start another round of 40 treatments further down the recovery road. But it wasn't long before Danny Murphy saw a difference in Brian's brain function; he was slipping. Brian returned to the HBOT unit at LGMC four to five days a week while still going to school and seeing his physical, occupational and speech therapists.

On May 4, a week after he first shared his story with The Independent, Brian found out - through the phone in the HBOT chamber that allows patients to speak to others in the unit - that he passed his visual arts survey class at UL. 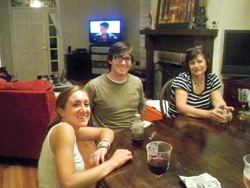 The late Nicole Murphy, Brian and mom Charlene pose together at home in a family photo submitted by the Murphys.

"He started not being able to remember five minutes previously," Holden recalls amid high fives and smiles that filled the unit after hearing the news. "I've watched him progress from being wheelchair bound to walking with a cane, to getting rid of his cane, from having no short-term memory, to the news we got today that he passed his art appreciation course at UL with a legitimate grade. I didn't know whether Brian was ever going to be able to go back to college."

Holden began chronicling Brian's recovery on video early on, when Brian's neurological progress was slower. With the help of his son, Josh, a filmmaker who lives in Austin, the Holdens have published a short, three-and-a-half minute video on YouTube that offers a visual before-and-after on Brian's recovery stages.

"I think hyperbarics is adjunct therapy; it helps, but it doesn't do anything without the rehab and all of Brian's own work on his recovery and his family pushing him. It gives him a boost," Holden says. "We got dramatic improvement at first, and we're continuing to help his progress in small steps. God only knows if he's going to have the thinking ability he did before his injury. But at least we're able to help him improve it in the meantime."

What stands out for former STM soccer coach John Fell, a close family friend who coached two of the Murphys' six children, is not only the work of Brian, but the dedication of Danny Murphy, who stands alongside his son, week after week, during the numerous rehab sessions and workouts at Red's.

"It's a tragedy that's almost inconceivable, how it happened, where it happened," Fell says. "But out of this though it's amazing ... to see how Danny brings normalcy to Brian's life. It's an example of how to love your family. They're such a tight-knit group. 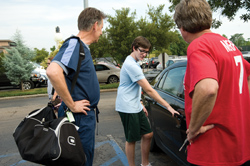 Dr. Pat Herrington, from left, visits with Brian and Danny Murphy in th Red's parking lot after a recent workout.

"It's inspiring to see [Brian] work so hard," Fell continues. "Instead of feeling sorry for himself, his focus is on getting better and trying to get back to where he was. I hope people appreciate how hard he's working, how hard it was just for him to be able to walk again."

With only a few HBOT sessions left, Brian is staying busy through his workouts and other recovery-related activity. At home, he spends his time studying, seeking a challenger for ping pong games - and caring for Xander, the dog Nicole adopted when she started med school.

For Brian, no doubt, he sees big things in his future.

"I'm going to be a pediatrician," he says definitively, prompting a chuckle from his father.

"Three weeks ago, he wanted to be a psychiatrist," Danny Murphy says with a smile.

"Yeah," Brian retorts, "but I think now that working with kids will be more fun than working with crazy people."

**View the video compiled by Dr. Holden and his son Josh here.
**