A dispute between non-profit Acadiana C.A.R.E.S. and building owner Roselawn Properties results in the displacement of eight HIV-positive patients. 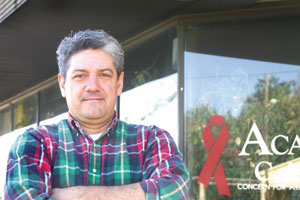 New Orleans Seventh Ward resident Jules Hebert checked himself into LSU's University Hospital days before Hurricane Katrina with a case of walking pneumonia. When the storm knocked out power to the hospital, Hebert survived a week without electricity, running water and medicine. He was rescued and airlifted to a Memphis hospital, where his pneumonia was cured, but his blood work confirmed he had contracted Human Immunodeficiency Virus, commonly referred to as HIV. Homeless after the hurricane, Hebert found shelter at the Cajundome in Lafayette. But with his immune system compromised, he was at high risk of infection in the dome's crowded quarters.

Medical workers at the Cajundome called Acadiana Concern for AIDS Relief, Education and Support, which offers community services and housing for those living with HIV/AIDS. Hebert was offered a private room in C.A.R.E.S.' Hope House, located above the agency's offices on Third and Vine streets in downtown Lafayette.

There, Hebert found shelter, education, medical attention and emotional support to help him learn to live with his disease. Along with the services offered him, he discovered he was not alone. The other seven residents of Hope House took him under their wing. "They helped me get stronger," he says. "We were a family."

That family is now broken up. A lease dispute triggering a lawsuit filed by C.A.R.E.S. against its landlord, Roselawn Properties Inc., has culminated in the closure of Hope House and the possible eviction of Acadiana C.A.R.E.S. Three days after Christmas, Hebert and his apartment mates were forced to leave in an upheaval former resident Darrell Latin likens to an evacuation. "Now we're all in different locations with the drama, the stress," says Latin. "It's like a hurricane all over, having to start all over. We're still in touch, but we're not together."

A 20-year old state and federally funded regional organization, Acadiana C.A.R.E.S. has been a tenant of Roselawn Properties for the past six years. Roselawn's president is Kathy Ashworth, a former city councilwoman currently serving on the boards of Downtown Development Authority and United Way. C.A.R.E.S. first entered into a lease agreement with owner Calvin Legé, who sold the block-long building facing Jefferson and Third streets to Ashworth for $142,500 in 1999. The former state office building Ashworth bought had been abandoned and was in deplorable condition when C.A.R.E.S. started renovating.

Ashworth charges C.A.R.E.S. $2.73 per square foot, which translates into $1,200 a month for the 6,000-square-foot downstairs office space, an amount described in Ashworth's affidavit as a deep discount granted in order to help C.A.R.E.S. save money.

"We made it marketable," says C.A.R.E.S. Director Claude Martin. "We renovated it for $20 a square foot."

In 2002, C.A.R.E.S. received a $500,000 grant from HUD to create a communal residential facility named Hope House for its most at-risk clients. "Hope House was for that person who was homeless, sick," says C.A.R.E.S housing case manager Marlene Dauterive. "Someone who would always be on the street. Because we're targeting HIV and chemical use clients, it's imperative that they have tight structure and that they live together. Hope House made it very easy to house them, and they still had private living space. They were structured and secure. Once they got [social security] disability they could move to a scattered site."

When the grant came through, C.A.R.E.S. leased an additional 7,000 square feet upstairs from Ashworth for $1,800 a month, putting the HUD money into renovating their new apartment. While the rent was cheap by downtown standards ' $3,000 a month for 13,000 square feet ' Martin contends that C.A.R.E.S.' total investment of $650,000 brings its payments in line with current rents.

"We paid for everything," Martin says. "The property owners didn't pay for anything. You can go to any Realtor in town and see that this property was uninhabitable before we started working on it. We have been very responsible in our stewardship of keeping this property up and renovating it as we did."

The relationship between Ashworth and Martin had soured by 2004. Martin says Ashworth was unresponsive to requests for repairs that were not included as the tenant's responsibility in the lease. Bones of contention include percentages of insurance costs, flooring repair, water leaks, security systems, access to an elevator, payment of utilities and ultimately attorneys' fees.

Martin contends Ashworth kept changing the terms of how she was going to charge for property insurance. Jeffery Lilly, chairman of C.A.R.E.S.' board, says the insurance issue is a result of Ashworth leasing the upstairs for residential use without researching the cost. Once she discovered the insurance premiums were higher for residential, she passed on the increase to C.A.R.E.S. "We were willing to pay what we thought was reasonable," Lilly says, "but we weren't willing to pay what she was charging. And she wouldn't show us the insurance documents. The whole board felt it was a little too much, and when we started questioning her, she got upset."

Kathy Ashworth did not return multiple calls for comment. Roselawn Properties issued the following statement to The Independent via email: "In October, Roselawn offered that C.A.R.E.S. could stay in the building until the end of the year while they decided if they wanted to sign a new lease. ...They were offered a new lease again in December. They have been offered a new lease yet again as recently as last week. ... The new lease does not increase their rent. The offer for them to remain is still on the table. But they must either sign a lease or vacate the building."

"We would dispute the insurance costs," says Martin, "and we'd get back from [Roselawn] that if we didn't pay them, we'd be in default of our lease, and we'd lose our lease. It got to the point where we had to go to the courts to get some of these things resolved." Ashworth's other tenants in the adjoining building, nightclub RAIN and Grand Contemporary art gallery, also hired attorneys to deal with utility disputes. The two businesses share electric meters, all three are on the same water meter, and arguments sprang up over who owed what percentage of utility bills.

Providing separate utility meters should be the responsibility of the landlord, Martin contends. But every time the issue came up, according to Martin, Ashworth told her tenants it was not her responsibility under the lease. "All of this is because the property owner doesn't want to manage her property," Martin says.

In May 2004, Martin deducted the cost of some repair work he performed himself. "I deducted $550 off the rent to cover some floor work upstairs," he says. "I also paid them a quarter of the insurance premium instead of 50 percent. We had been going back and forth about the issues, but I kept paying the [rent and insurance premiums]. When I started deducting, the whole thing started. Lawyers got involved. They were receiving our checks, but they didn't cash them, saying we were in default of our lease. They were using that to make us back down on some of these issues."

"I took it upon myself to go and talk to her one-on-one," Lilly says. He brought Ashworth checks for two months rent, with deductions for insurance. "When I tried to talk to her, she told me, 'The meeting is over, and I don't want to talk about it.' This was way before we filed suit."

Roselawn cashed the checks in September, but Martin says the problems continued. C.A.R.E.S., represented by attorney Blaise Sonnier of Allen & Gooch, filed suit in May 2005 against Roselawn for injunctive relief and damages. Ashworth hired Hank Perret at Perret Doise to defend Roselawn Properties. Perret's response to the court outlines Ashworth's obligations under the lease, in which he states she fulfilled above and beyond what is required by law. In addition, on June 15, Perret wrote a letter to C.A.R.E.S. saying the agency was in default of its lease because it had failed to obtain written consent from Roselawn before making "alterations, additions or improvements" and that Roselawn reserved the right to terminate the lease.

Martin was shaken. "Kathy Ashworth is on the board of the United Way. Her attorney, Hank Perret, started the Miles Perret Center. Why she would play such hardball with a non-profit baffles me," he says.

Martin continued to attempt to negotiate the contested issues within the lease in hopes that C.A.R.E.S.' client services would not be interrupted.

One clause in the old lease states that although C.A.R.E.S. has a 10-year contract, it must notify Roselawn in writing within 90 days before the anniversary of the renewal. On Aug. 15, Roselawn notified C.A.R.E.S. that it had failed to renew its lease in writing and was in default, threatening eviction a second time. Martin contends this was a bad faith response. "We felt that we were in negotiations looking at all issues within the lease, and we felt that in itself was notice we were going to stay. It's the very thing we were negotiating about."

On Oct. 7, Roselawn offered a new lease, which C.A.R.E.S.' board of directors rejected. "She wanted to have control over everything," Lilly says. "Once we started looking into it, we thought she was trying to squeeze us for too much money." Martin agreed with Lilly's assessment. "I talked to three different attorneys, and they all said we would be derelict in our duties as this agency if we signed the lease," Martin says.

By November, Roselawn informed C.A.R.E.S. that without a new lease, it would only be allowed to remain in its space through the end of the year.

The holidays were quickly approaching, and Martin and his staff realized the deadlock was going to result in eviction of his clients. "Once we knew there wasn't going to be any ability to negotiate any further, we told the clients," he says. "I was hoping we weren't going to have to do that over Christmas. Some were evacuees from New Orleans. But by the 19th of December, Ashworth couldn't make the concessions we needed to be able to stay. If we couldn't accept what they were offering, then we needed to be out of there. We came to the point where I had to start looking for places to move people to."

"I'd just been here two days," says C.A.R.E.S. client Steve Richard. "Oh, it was bad when I found out. [Being] here would have made me stay clean and sober. You gotta be drug free here. Two days later, it closed, and I was messed up."

Richard's roommate, Dennis Walker, says he thinks if Ashworth had met the residents of Hope House, her decision would have been different. "I wish that this landlady could see in her heart these are wonderful people, and she doesn't realize what she's doing to some wonderful people."

Martin and his staff found apartments throughout the community for his clients. The eight residents of Hope House moved out Dec. 28. "It's very difficult to get through HIV, mental problems, drug and substance abuse," Dauterive says. "Having a stable home helped them get better. We're very concerned about them. I don't know how they're going to get along."