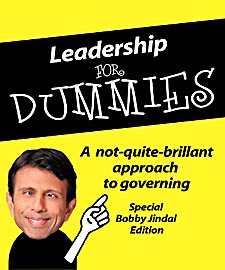 Friday, June 10, was Bobby Jindal's 40th birthday. I couldn't be there to give him a present in person, and since the Big Four-O is, well, a big deal, I thought I would present him with a special gift in this space: a synopsis of my forthcoming book, Leadership for Dummies.

I'm thinking of dedicating the book to Gov. Jindal. After all, he inspired not only the book's title but also its contents. His, um, not-quite-brilliant approach to governing these past three-and-a-half years gave me so many examples to cite. Plus, it's obvious that everything he knows about leadership he read (or wrote) somewhere in a book, so what better way to wish him a happy birthday?

So, governor, I hope you enjoy my little primer on leadership. It's a special edition, just for you.

1. Grow a pair. Quit being so afraid of offending every right-wing yahoo whose support you cravenly debase yourself to keep. Show some balls. No, not like Anthony Weiner; more like Ronald Reagan. This whole "tax virginity" thing only reinforces the fact that you actually look like a 40-year-old virgin.

Leaders don't need to be pure; they need to show courage. Stop running from tough issues. Learn to take a punch - it might hurt you but it won't kill you. In fact, it will make you stronger.

2. Stop faking it. You're not a redneck, so stop trying to blend. You look ridiculous in camo, and I doubt you know which end of a shotgun to shoulder. Stop running away from your heritage, your Ivy League education, your Rhodes Scholar credentials - and stop pretending you're not looking for the first ticket out of Louisiana.

3. Lead by example. You say you want to make Louisiana a place our kids will want to come back to. Great. Start by not leaving the state so often to raise money and build a network for the national campaign you say you're not waging.

6. Walk the walk. Quit writing books about leadership when you clearly don't know the subject.
Once you master these baby steps, I'll send you my sequel: Leadership for Rhodes Scholars.

Clancy DuBos is publisher of New Orleans' Gambit. A version of this column first appeared in that publication.