Changes in business, technology and worker values are making the power lunch a thing of the past. 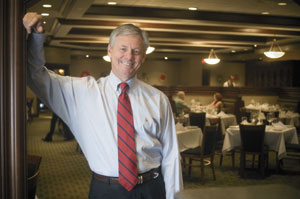 The days of two-martini lunches ' or was it three? ' in Lafayette may be on the way out.

The restaurant scene is much more competitive today, and the significant downsizing of Ruth's Chris' lunch business (it's now only open on Fridays) is evidence of new networking and entertaining trends. Whether it's a change in how the oilfield industry entertains, the "dress-down" attitude of the local business community, more professionals working from home and easier communication because of technology, networking in Lafayette is moving in new directions. And power lunches at pricey restaurants ' where extravagant meals and liquor can help secure a business relationship ' are no longer at the top of the list.

"Every industry has its own traditions, but I think people today are so busy that they use structured events to see people," says Henry Florsheim, the Lafayette Economic Development Authority's vice president. Florsheim surmises today's business community is under pressure to be more productive during the day.

Jerry Prejean, senior vice president/private banking manager at IberiaBank, says his clientele ' mostly doctors ' rarely commit to lunch meetings. "Their practices are busier, so it actually costs them to breakaway for lunch," says Prejean, who's gotten more creative in his efforts to nurture and secure business.

"We're doing more specialized entertaining," he says. For the Jerry Seinfeld performance in April, for example, the bank hosted a group of clients ' many in the same age group heading down similar career paths ' for a pre-show gathering in the courtyard at Café Vermilionville, a fine dining restaurant on Pinhook Road. There wasn't much talk of bank business, but it offered clients an opportunity to build new relationships. "They were impressed with the circle of clients that were there," Prejean says.

Bankers like Prejean may be taking their cue from pharmaceutical representatives who in recent years are turning to group entertainment to connect with doctors and introduce their products. "They are a phenomenal boon to our business," Ruth's Chris General Manager Patrick Fleming says of the drug company reps. "[But] again, that's all dinner."

Such after-hours schmoozing is alive and well, insists Fleming, but the clutter of restaurants in recent years has just made it too easy for people to make other choices for lunch. "They're every place now, and you're going to get more," he says. Competition was the driving factor behind the decision to shutter the lunch business in early July. Metairie-based Ruth's is primarily a dinner concept, and the Lafayette Ruth's was among only a handful of the chain's 39 corporate-owned restaurants that opened for lunch. Others in Louisiana include New Orleans and Metairie, along with Baton Rouge, one of 49 franchised stores. The company does not have plans to stop serving lunch at those stores.

Fleming worked as a landman in Lafayette from 1980-1986, so he knows how oil money flowed back then. Since that time, however, a lot of the white-collar jobs ' and the entertaining budgets ' have moved to Houston.

Fleming expects more restaurants to be dinner-only, saying it's a tough market for higher end eateries to make it during lunch. Outback Steakhouse, Doe's Eat Place (a new steak and tamale restaurant a block from Ruth's that also only opens for lunch on Fridays) and the Bonefish Grill location coming to River Ranch only serve dinner.

Open in Lafayette since 1977, Ruth's previous Pinhook Road site, a dark and musty space housed in a former college hangout, was the stereotypical hot spot for clandestine gatherings and big business deals ' much more so than the richly-appointed and airy current location, where it's been since late 1998.

Whether over lunch or at another type of social event, relationship building is critical to success, says LEDA's Florsheim. "Most people I know do business with people they know," he says.

That's the premise behind the Greater Lafayette Chamber of Commerce's annual Business Over Breakfast, biannual Eggs & Issues and monthly Business After Hours functions. Patricia Parks, the chamber's events coordinator, says the BAH has been held since 1985 and that more breakfast networking opportunities were added recently at the urging of the membership. "I think it's because a lot of them have children or other obligations after 5," she says.

The networking from Business After Hours, held from 5 to 7 p.m. at a different business each month, does tend to stretch later into the evening, Parks says. "Most people carry the party elsewhere. Any place downtown is fair game, and La Fonda is another popular place," she says. "It's probably more partying, if I had to guess, but it's very possible they're continuing the business conversation elsewhere."

According to at least one study, there's good reason to enjoy a couple of drinks after work. In a July 13 Wall Street Journal op-ed piece, Syracuse University associate professor Arthur C. Brooks writes of an association between drinking and higher earnings. Of workers identical in education, age and other characteristics, those who drank earned 10 to 25 percent higher wages (economists guess that moderate alcohol has health benefits that make people more productive ' or alcohol acts as a social lubricant). Beyond two drinks, wages tend to fall.

Still, Ruth's of Lafayette is hoping the power lunch isn't dead. Fleming says the objective is to consolidate it into Friday business, and the plan seems to be working. "It's going great, and we're also seeing increases at night [during the week]," he says.

IberiaBank has a corporate philosophy that requires employees in its private banking division to network, and Prejean says golf and hunting outings are still big forms of entertainment, though he believes some level of business will always be done over lunch. He says Ruth's was a good place to impress a client.

"I wish [Ruth's] was open, quite frankly," Prejean says.