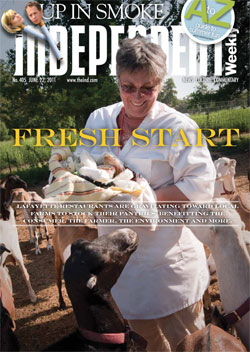 Lafayette restaurants are gravitating toward local farms to stock their pantries, benefitting the consumer, the farmer, the environment and more.

Lafayette restaurants are gravitating toward local farms to stock their pantries, benefitting the consumer, the farmer, the environment and more. 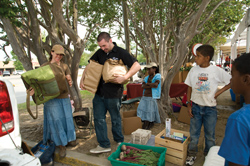 Read any historical account, watch an old movie or listen to stories your grandparents tell you - at one time, pretty much anywhere in America, people had a butcher, a baker, a source for eggs, fruit and produce. Until Sam Walton stamped his foot in the middle of the U.S. and reached outward, there were no "big box stores." Not that those stores are inherently evil - I enjoy the toy section at Walmart like anyone else - there is no doubt that our very method of modern day hunting and gathering has changed significantly over the past 50 years, more differently than it has been at any time or place - ever.

Simply put, people used to go to the markets or their backyards, bought or gathered up what they wanted, went home and cooked. The grains eaten were watered with the same water they drank, the animals ate off the same land, and there was no forced distance between food and consumer.

In the past 20 years a movement has been slowly lumbering out of a hibernation caused by, of all things, progress. Advances in technology made the inevitable move toward the kitchen, and after a while it became not merely feasible but expected to have frozen strawberries waiting for you in your freezer. Mass production of food meant more people could be fed for less money - technology evolved to slaughter and pluck chickens, thousands in a single swoop of a blade and a hot water vat. This created a chasm between the everyday Joe and the food that nourishes him. Now the country is bridging that chasm in a movement most commonly known as farm-to-table.

This is a food re 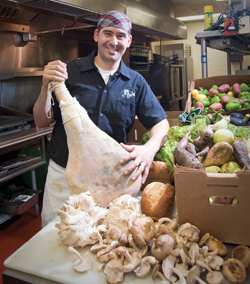 volution to some, a revival to others, and it has come to Lafayette by way of chefs like Manny Augello, whose father was a prominent chef in New York and New Orleans for 45 years, specializing in cucina povera, which is more succinctly a cooking method or philosophy that a chef uses seasonal, fresh ingredients and allows the land and the season to dictate the menu.

The gap is closing between purveyors and farmers and the restaurants in the area, and it isn't just at Jolie's; Catahoula's, Village Café and more fine dining establishments are seeking out small farmers to supply their kitchens.
So why is this movement taking hold now?

"We are a nation of a new generation, and our generation loves to answer questions," says Augello. "We have lost the way of the butcher shops and fish mongers. Our markets diminished and people turned to the corporate giants to provide them with what they needed. People see a label with pretty colors on it, maybe a nice depiction of a farm in a sunny setting, and to them that is good enough.

"I think people are tracing their steps back to the problem, and that usually leads them to the store shelves. It's the understanding that we have no idea what really is in our food," he adds, "and the alternative is to search out the true food growers and artisans, so this new' movement has been created, except, it's not new at all."

I went out to the Hub City Farmer's Market recently with Manny, Abi and Amelie Augello. The market has everything from fresh tamales to sunflowers, freshly baked goods and honey. Manny's wife Abi has her own business as a PR consultant and party planner. Amélie, not even a year old, is the family taste tester. I watch as Manny plunks a bundle of beets from the market next to Amelie in her stroller. Within a half hour, most of the beet's green has been gummed. So what's this about kids not liking their vegetables? 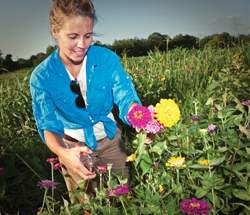 arming aren't merely hobbies or a way to feed the family. For some, like the Gotreaux family, it's a means for livelihood. Gotreaux Family Farms in Scott is undoubtedly the farm with the most name recognition in Acadiana. A huge family of mixed ethnicities, all the kids help out with harvesting the produce, tilapia, meat and eggs that the family sells. Watching them is like watching all of 1970s American television blend together, as if the cast of Good Times dropped in on Little House on the Prairie. They supply Jolie's with the fish for the menu item Zapp's Crawtator Crusted Gotreaux Tilapia, white and light like a cloud with Zapp's potato chips making an intriguing, fun, snappy crust that's served with a creamy sauce. The local farm supplies the eggs for several other dishes, too.

At Jolie's you can order from the front of the menu and then, with a snap of the wrist, read the back page, which lists the names and locations of its food purveyors. Like the produce? You can go directly to the farm yourself. Mysteries are sometimes best left to novels.

For people like the Gotreaux family or Emily Neustrom, gardening and farming are their livelihoods and not merely a hobby. Neustrom, daughter of Lafayette Parish Sheriff Mike Neustrom, supplied Jolie's with lettuce during her 2011 spring crop and is looking forward to supplying more produce in the future. Having started her business, Jubilee Farm & Garden, in November of last year, she's met with great success.

While getting her undergraduate degree at UL Lafayette, Neustrom watched a documentary on horticulture therapy, a phenomenon more common in larger cities. The documentary was about how learning to plant and harvest produce helped out the population of a prison. After soaking up horticulture info and realizing that having a job where you are outside would be pretty awesome, Emily went to work.

"I did an indepe 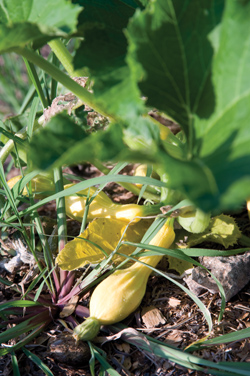 ndent study at Acadiana Outreach community garden," she says, where she learned how a garden could benefit a community in more ways than one. "After that I worked at the Brooklyn Botanic Garden [in Brooklyn, NY] for three years. My job was doing horticulture therapy for kids with cerebral palsy. I also serviced over 100 community gardens in the area." After learning about the horticulture master's degree at LSU, Emily heard the beat of a familiar drum and came home. "I wanted to live back in Lafayette and be part of the agricultural community, supporting local farms and our culture," she says.

"[We're] more of the revisiting of a lifestyle and food culture similar to our grandparents," Neustrom says of the farm-to-table movement. "So, in that sense, consumers are rejecting the industrial agriculture food system model, although cheap and convenient, and choosing locally grown, fresh food with a face behind it." Neustrom says the resurgence and demand for seasonal, locally grown, organic produce follows decades of consumers wholeheartedly trusting science and commercial agriculture to keep our food supply, consumers and the environment healthy and safe. "Unfortunately, due to unregulated industrial agriculture and large-scale farming systems, consumers' health and the environment are paying the bill, while corporations are reaping the profit," she adds. Neustrom notes that imported food from other countries is also not heavily regulated, and consumers are unknowingly exposed to chemicals and pesticides that are illegal in the United States, not to mention the unknown effects of genetically modified corn and soybeans, which she maintains are in practically all processed foods. "Americans are the lab rats, because genetically modified foods are banned in Europe.
The government didn't tell you, because the government didn't ask you. Consumers want to know, and that's what is driving this movement.

"It's so interesting," Neustrom continues, "because the Acadiana area was inhabited and settled primarily by Cajuns who farmed the land and grew all of their own vegetables and meat. Cajun culture has preserved its food traditions and connection to the land, unlike most American communities. I've observed that farming and gardening knowledge is still common here because of our Cajun culture, although the younger generations have lost that knowledge due to the fast food culture."
Farm-to-table proponents see the demand for locally grown, fresh and even organic produce growing here in Acadiana. Thankfully, restaurants are seeking locally grown produce as well. "The farmer's markets are gaining new farmers, young and old. People in the Acadiana area are excited about food and are increasingly willing to seek out the freshest, most local options," Neustrom says.

While neither are nutritionists, both Augello and Neustrom believe in the health benefits of buying food from local people, no matter where you live. Augello points out that in summer, water-laden crops like watermelon arrive just when your body craves more hydration. As Neustrom succinctly and humorously puts it, "Well, cheeseburgers and Coca-Cola aren't ever in season, unless you want a short life. If you are eating in season, you are consuming nutrient-dense fruits, vegetables, nuts and seeds. Our diet impacts our health. Eating seasonal produce is a healthy choice for your body. It's that simple."

Restaurants that buy locally also help to keep money in Acadiana, a move that obviously benefits everyone. 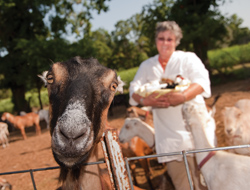 ilk our goats from March through October," says Nicole Arceneaux of Belle Ecorce Farm in St. Martinville. "This is our first year milking year-round. We had to get a whole other herd. Restaurants ordering from local people help the small farmers." In addition to Jolie's, Belle Ecorce sells to POUR, Cena, Catahoula's and Joey's Specialty Meats, along with two fine dining restaurants in New Orleans and one in Shreveport. Owner Wanda Barras also goes to market in Baton Rouge every Saturday to sell to restaurants and "civilians" alike, and people are free to stop in to Belle Ecorce and buy straight off of the farm itself.

This philosophy of farm-to-table is, to Mary Tutwiler, nothing new. "Growing up in New Orleans, I've always eaten like that," says the former Independent Weekly food writer, who is teaming up with former Ind staff writer Nathan Stubbs in a new restaurant venture - the soon-to-open Saint Street Inn. So important is the farm-to-table movement to Tutwiler that the restaurant's signs will celebrate it in slogan-form. "I've been writing about the farmer's markets and sourcing locally for all of my seven years at The Independent. I feel like the movement is catching up with me," Tutwiler says.

The Saint Street Inn will be occupying the spot at the corner of Brook and St. Mary streets in the original Bonnie Bell's location, across from Old Tyme Grocery. "We'll be putting together menus based on what is available this week, or this month," Tutwiler adds. "Some dishes will stay on all season. That's what makes local restaurants so much more vivid and exciting than chains. The chains can't do this."

Why do it at all, 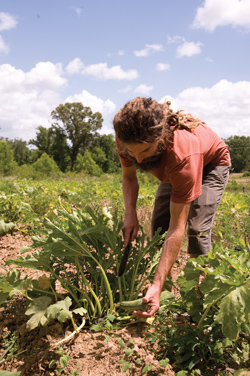 this farm-to-table, seasonal eating? Finding cheese mongers and an FDA-approved rabbit plant (of which there are only three in the United States) is a lot of legwork. While buying locally supports the local economy, buying in bulk saves money. So what is the advantage?

"To cook well," Augello says, "one must acquire a deep and unpretentious understanding and commitment to food. Most chefs don't do what I do because it is far too easy to sit in an office and wait for the truck to show up, and you can quote me on this."

Augello praises his staff unerringly: "It takes effort and determination to do what Jolie's does. It takes a crew full of talented individuals who think about their craft non-stop. Culinarias doing what they love."

And for the right reasons: "It's simply being kind to your customers [to cook this way]," he says. "You are putting something into someone else's body; it's only fair to be mindful of that."