THE SKINNY ON 'RITAS
If you haven't heard of Bethenny Frankel's book, Naturally Thin, or if you haven't seen her as the star of The Real Housewives of New York, then perhaps you've heard of Skinnygirl Margarita and just didn't know it was Frankel's own concoction. 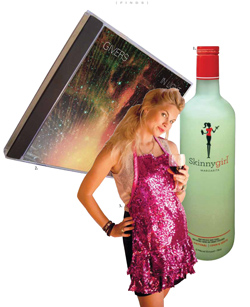 THE SKINNY ON 'RITAS
If you haven't heard of Bethenny Frankel's book, Naturally Thin, or if you haven't seen her as the star of The Real Housewives of New York, then perhaps you've heard of Skinnygirl Margarita and just didn't know it was Frankel's own concoction. This 100-calorie per 4-ounce serving of goodness has become a hot fad for dieters nationwide, but also serves the au naturel types who don't go for high fructose corn syrup, artificial coloring or preservatives. Dubbed "the margarita you can trust" by the mixologist and chef, the Skinnygirl Margarita uses agave nectar for sweetness, and it's made with Blue Agave clear tequila. Topped off with only natural flavors, it offers a tasty alternative to the 500 calories that come from 4 ounces of an everyday margarita. You can buy it at Champagne's Market in the Oil Center or at Marcello's on Johnston for about $12-$14. - Heather Miller

GIVERS HAVE DONE JUST THAT
June marked the debut studio album, In Light, by this homegrown band. Currently touring nationally and stopping in New York last week for a rousing appearance on Jimmy Fallon's show and a gig at NYC's legendary The Bowery, the kids are all right. In Light has a sumptuous thumping rhythm with a strong dash of Afro-Caribbean beats as Paul Simon favored in the early '80s through today. These modern hippie kids seem to be saying "give peaceful drums a chance" with their happy, jingly, nearly symphonic sound, layered and big. You can find their album online and at upcoming shows. Expect a triumphant return home this fall. The album runs around $10. - Anna Purdy

HAUTE HOSTESS
The table is beautifully appointed, the wine's fine, and - hopefully - the meal divine. The cook looks smashing in the kitchen, having just joined the ranks of celebrities like Oprah Winfrey, Nicole Kidman and Kate Middleton by donning a glamorous Haute Hostess Apron from designer Elizabeth Scokin. Being in the kitchen doesn't have to cramp your style anymore, ladies. You can glam it up while stirring the pot in these high-fashion aprons, available from kiki in River Ranch. The aprons are one-size-fits-most and come in a wide range of colors featuring jeweled designs, applique ribbons or sparkling sequins. They're priced at $200 to $350 and are so a la mode you might just decide it's one accessory you're not taking off when dinner is served. - Leslie Turk