The effects of Hurricane Rita and subsequent drought conditions have rice and crawfish farmers in Vermilion Parish reeling. 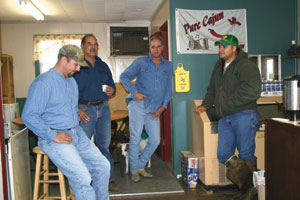 It's 7 a.m. at Shawnee's Bait Shop near Mouton Cove in Vermilion Parish, and crawfish farmers Stephen Tessier, Mike Detraz and Allen Mclain gulp steaming coffee from small Styrofoam cups dwarfed by their large work-worn hands. Normally at this hour, the three men and a dozen other farmers who stop by Shawnee's for early morning coffee and gossip would be long gone, hauling in traps filled with the first crawfish of the season.

Mclain's ponds were overwhelmed on Sept. 24 by the saltwater surge from Hurricane Rita, which carried shrimp and crabs inland with the tide. Detraz estimates 70 percent of the crawfish harvest from Vermilion is in dire straits because of the high level of salinity in the soil and water. And what hurts crawfish also harms rice ' both crops face serious challenges because they are so dependent on fresh water.

Prior to Rita, an extended drought caused crawfish to die in the ground. Then Rita's inundation of saltwater killed the rice stubble crawfish depend on for food. Following the hurricane, drought conditions have continued, leaving ponds to dry with a white salty crust covering the mud. The irrigation ditches typically used to pump water into crawfish ponds are also filled with salt-soaked water. Until heavy winter rains dilute the salt, fields will lie barren of vegetation and crawfish.

"It has to rain to flush it out," says Detraz. "The storm surge came up in here, and it was full of mud and salt, and it settled on top of the stubble and killed everything. There wasn't any oxygen in the water. [The smell] still stinks."

Crawfish sales tide rice farmers over until they harvest their summer crop. From January through March, rice farmers use the cash flow from their crawfish harvest to borrow money to buy seed, chemicals, fertilizer and new equipment, as well as pay off last year's loan. Without crawfish, there is no cash flow for most farmers. "If we can't borrow money, we can't pay our bills, can't plant rice," Detraz says. "If it stays like it is, 50 percent less acreage will be planted in rice [this] year."

Rice in Vermilion Parish in 2004 was a $34.5 million industry. Last summer's yields were even higher, but Rita destroyed the second crop. Rita's legacy has cast doubt on the ability to grow any rice at all this year in lower Vermilion Parish. "Even if we plant and the rice sprouts, we don't know if it will make a head," Tessier says. The LSU Agricultural Center in Crowley is conducting soil samples to see if any rice will survive in the salt-saturated earth. Howard Cormier, rice specialist with the Abbeville LSU Ag Center, says the current conditions may decrease rice acreage by 30 percent or more. "That's a decrease of $10 million to $12 million right there," he notes. "Losses continue to go up and mount as we try to remediate."

Rita's blow backhanded Louisiana's rice farmers who have struggled with rising fuel costs and declining rice prices over the past five years. "Farmers are going out of business, going bankrupt," Detraz says. "We're not getting any response from the federal government. Nobody knows what to do."

"The farmers are not in any way, shape or form overstating the crisis they are facing," says Randy Jemison, director of Louisiana Field Services for the USA Rice Federation. Jemison is closely watching as Mississippi and Louisiana lawmakers attempt to cultivate support on Capitol Hill for a relief bill for farmers. "We do know there will be disaster assistance, but growers don't need loans to add to their debt load, they need a direct payment," he says. "Once you add another loan to the existing carryover, how are they going to get financing for the coming year? The rice industry is suggesting a direct payment. It's the quickest and most efficient way to get dispersal money to eligible growers.

"It's a matter of timing," he continues. "They are making their loans for the spring planting right now. If they have to go chasing paper for the winter months, it's going to throw them behind in getting any assistance. They need assistance right now."

Of the original $62 billion appropriated by Congress immediately after Hurricane Katrina, approximately $15.5 billion still hasn't been distributed. (The money is controlled by FEMA.) While the Defense Bill passed by the U.S. House of Representatives on Dec. 19 includes a $29 billion package for hurricane relief, the big outstanding sectors still unfunded are housing, flood insurance and agriculture. Direct assistance needs to "get back into the hands of the people back home," says U.S. Rep. Charles Melancon, who is spearheading the agriculture funding effort for Louisiana.

Melancon has tried another approach to open the coffers of a U.S. Department of Agriculture hurricane disaster program. Following Hurricane Charley in 2004, the USDA made payments to Florida's citrus industry totaling $408 million. While the USDA announced in October that $250 million in funds was available for hurricane-damaged agriculture production areas along the Gulf Coast, no action has taken place to disperse the funds. Melancon wrote White House Chief of Staff Andrew Card and urged immediate dispersal of the money.

Meanwhile, crawfishermen and rice farmers in lower Vermilion have no crawfish to sell, no cash flow, and no ability to get loans from local banks for the upcoming season, Detraz complains.

"In 12 weeks, it will be time to plant rice," Tessier says. "Usually I plant 500-600 acres. But there's too much indecision. Money has to come from Washington in January. We were in trouble before the storm. Now, we're on our backs."

"This is not just an agricultural crisis," Jemison adds. "Look at the big picture. Bankers, equipment dealers, the local gas station, every business is going to be affected by the crisis facing the farmers. Our dollars come from agriculture. This thing is going to impact all of south Louisiana economically if there is not some sort of assistance."