A bill that would have created the Lafayette Parish Redevelopment Authority was opposed by both ends of the political spectrum.

A bill that would have created the Lafayette Parish Redevelopment Authority was opposed by both ends of the political spectrum.

The withdrawal of House Bill 531 on June 13 was an afterthought, really. The bill creating the Lafayette Parish Redevelopment Authority had cleared the state House on May 12 unanimously, enjoying the kind of overwhelming bipartisan support that most locally focused bills get. But before 531 was scheduled to move into a Senate committee on May 17, its sponsor, Rep. Joel Robideaux, an independent Lafayette lawmaker, pulled it from consideration. Not coincidentally, by that time howls of protest from the most far-flung political corners of Lafayette - the parish's Democratic Executive Committee and the Tea Party of Lafayette - were reaching a crescendo. So, less than a month later when the bill limped out of the shadows to die, few were surprised and many were relieved.

Robideaux cited "important questions" and "unanswered concerns" about the proposed redevelopment authority in withdrawing the legislation, and in diagnosing the death of 531 those questions and concerns appear legitimate. 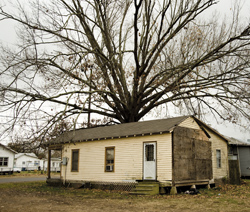 House Bill 531 was written, supporters say, with abandoned, dilapidated properties like this in mind. Opponents of the bill warned it could lead to abuse of power by an unelected board.

On its face 531 was well-intended - "to eliminate or prevent the development or spread of slums and blight, to encourage needed rehabilitation, to provide for the redevelopment of slums or blighted areas, and to undertake other feasible parochial activities as may be suitably employed to achieve the objectives of such workable program," as the bill's preamble reads. HB 531 was essentially a verbatim version of a 2007 bill that cleared the Legislature and was signed by Gov. Kathleen Blanco creating the East Baton Rouge Redevelopment Authority, substituting Lafayette for Baton Rouge.

The EBR Redevelopment Authority, or RDA as it's known in the capital, began operations in 2008. High on its aggressive agenda are plans to redevelop five neighborhoods, most of them in north Baton Rouge's decaying "inner city," by acquiring blighted, tax-delinquent properties, clearing the titles and marketing those properties to individuals, developers and non-profits. While Baton Rouge's RDA is just getting a head of steam, it was created and began operations in a different era - pre-tea party.

Like the RDA in Baton Rouge, Lafayette's version would have been run by a five-person appointed board. Appointment power in the bill went to City-Parish President Joey Durel, the City-Parish Council, the Community Foundation of Acadiana, District 44 state Rep. Rickey Hardy and District 29 state Sen. Elbert Guillory. The latter two were granted appointment power, the bill reasoned, because their districts comprise the areas in Lafayette Parish most in need of redevelopment.

After 531 cleared the House, the ire of the Tea Party of Lafayette was fully stoked. "For shame Mr. Robideaux and all our House members for passing this deceitful legislation," wrote Carol Ross to members of the Senate Local & Municipal Affairs Committee urging them to kill the bill. While not a listed member of TPL, Ross, wife of conservative newspaper publisher Ron Gomez and a frequent guest on Moon Griffon's radio program, is certainly sympathetic with tea party issues.

Within days of Ross' epistle to the Senate committee, the Lafayette Parish Democratic Executive Committee penned its own letter in opposition to 531 citing many of the same concerns.

Both parties' objection to an appointed, un-elected commission are arguably tiresome to anyone familiar with Lafayette Parish governance: There are about three dozen such appointed boards and commissioners operating in Lafayette Parish. There's the Airport Commission, the Library Board of Control, the Teche-Vermilion Fresh Water District and so on, all with devoted tax-revenue streams and many with the power to allocate taxpayer money. And they've been operating in Lafayette Parish for decades - above board, generally, but under the radar.

But elsewhere in 531 there are things that make you go hmmm. For example: "A bid by the authority at a tax sale for the minimum amount shall take priority over all other bids for the same quantity of property, except for a higher bid submitted by a conventional mortgage holder holding a mortgage on the subject property."

Does that mean a higher bid for a tax-delinquent property by someone other than the mortgage holder would be trumped by a lower bid by the redevelopment authority? Apparently so.

HB 531 also grants the redevelopment authority the right to delineate "subdistricts" within the redevelopment district, which as the law is written would comprise all of Lafayette Parish unless one, some or all of the smaller municipalities wanted to opt out. And - here's the rub for the tea party folks - "... a subdistrict may, within its geographical boundaries, utilize tax increment financing ..."

So, while language in 531 specifically requires tax propositions supported by the redevelopment authority go to a vote of residents, the authority could potentially make an end run around that by designating subdistricts and creating those dreaded TIFs, which earned a black eye via the Glenn Stewart Parc Lafayette fiasco a few months ago. 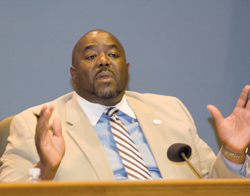 Council Chairman Kenneth Boudreaux was leery of the bill from the start.

And what, exactly, constitutes a "blighted" property?

When doing the autopsy on House Bill 531, maybe the biggest power broker in what transpired was City-Parish Council Chairman Kenneth Boudreaux, who represents District 4, the most economically distressed district in Lafayette Parish.

"We have always viewed the possession of land as the most valuable possession of any human being - the most valuable commodity there is," Boudreaux says. "That's all some people have is their family property. That's why I didn't want to move too fast on this - it's huge. And all the negative things that have been said about this, I want to try to prevent those from happening as opposed to trying to fix them after they happen."

Boudreaux felt slighted by the process that created the bill - especially so because as the councilman for a district that would be a focus of the authority's mission he didn't get a say in who served on the authority's board of commissioners.

"I felt the appointments should be on a local level just as the city-parish president was a local appointment," Boudreaux concedes. "And when you're talking about self-governance, I felt it needs to be among the closest proximity of elected officials who work with these communities. Accountability's going to be huge here in my opinion."

After Robideaux initially pulled the bill, negotiations, if you can call them that, among the interested parties - particularly Boudreaux and the Durel administration - began. Durel agreed to a rewrite giving Boudreaux and District 3 Councilman Brandon Shelvin appointment power instead of state lawmakers Hardy and Guillory.

But ultimately they weren't able to iron out other differences, mainly the possibility of this redevelopment authority being able to expropriate property, that is, declaring the acquisition of a title part of a "public necessity" or for "the greater good" and taking it against the title holder's will. The bill is so meticulously crafted and so larded with lawyer dialect that it isn't even clear if expropriation - "eminent domain" if you want to make it truly sinister - was even an option. But a source in the legal profession familiar with the bill says, yes, it is, "it's a legitimate concern." That same source also acknowledges the 500-pound gorilla in the room: A Lafayette Parish Redevelopment Authority, with an emphasis on "authority," was seen in Lafayette's black community as little more than an attempt by "the white man" to snatch black property - a view underscored by the bill's provenance: white Republican Joey Durel. 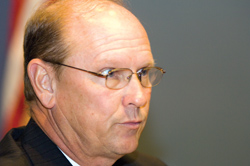 City-Parish President Joey Durel was frustrated by the derailing of HB 531.

As 531 derailed, Durel found himself in an awkward position, pushed from the right by the tea party, from the left by the Dems and from the center by the council chairman. The city-parish president declined comment for this story, but another source tells The Ind he was and remains angry and frustrated by what happened, and feels that a bill with good intentions was sabotaged by representatives - Boudreaux especially and local Democrats generally - of the people 531 was intended to help.

Durel, we're also told, is ready to wash his hands of the issue and isn't likely to back such legislation in the future.