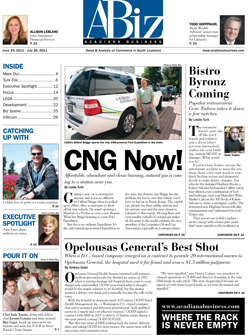 Affordable, abundant and clean-burning, natural gas is coming to a station near you.

Affordable, abundant and clean-burning, natural gas is coming to a station near you. 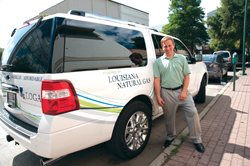 LOGA's Gifford Briggs sports the only CNG-powered Ford Expedition in the state.

Getting a new car is exciting for anyone, and it was no different for Gifford Briggs when he pulled up to ABiz's office in mid-June to show off his new vehicle. He wasn't sporting a Maserati or a Porsche or even a new Beamer. What has Briggs beaming is a new Ford Expedition.

But this is no ordinary Expedition. It's the only natural-gas powered Expedition in the state, but therein, says Briggs, lies the problem: for you to own this vehicle you'd have to fuel up in Baton Rouge. The capital city already has three public stations and two private ones and the next closest to Lafayette is Shreveport. Moving fleets and even smaller vehicles to natural gas makes all the sense in the world, explains the vice president of the Louisiana Oil and Gas Association, especially in Louisiana where the fuel is so cheap and abundant. But it can't happen without adequate infrastructure.

That's about to change in Lafayette, though not as quickly as Briggs and other proponents had hoped.

Bids for Lafayette's first publicly accessible natural gas fueling station were resubmitted June 21 and 22; bids had to be let for a second time after a series of minor technicalities in the first round earlier this year. All three of the new bids are within the $1.6 million budgeted for the project, says Lafayette Consolidated Government Planning Manager Mike Hollier, who notes it could take several weeks for the bid review process. Hollier anticipates the station, which is locating at 1515 E. University Ave., at LCG's Public Works complex, could be up and running by February.

In the meantime, a more aggressive effort is under way to open the city's very first natural gas fueling station for LCG's five new CNG vehicles, which have just been added to the city bus fleet. "They are magnificent," Hollier says. "They were arriving one at a time, and the last one just arrived." Those buses will hit the streets in early September, when the LCG station, also locating at Public Works, opens. That station is likely for the exclusive use of LCG, Hollier says.

Hollier says LCG continues to work through the details of a much bigger plan to convert more of the city's fleet, as well as UL buses and parish school buses to the alternative fuel.

But LCG isn't the only player in the fueling station game. Houston-based Apache Corp. plans to open a CNG fueling station in Lafayette this year to serve private and governmental vehicle fleets and may open more as demand rises. The station is expected to be permitted in late July or early August and could be up and running near Frank's Casing Crew on Verot School Road by October. Apache also is donating equipment for the CNG station that will fuel city-owned vehicles.

Hollier says yet a third publicly accessible station in the I-49/I-10 area is also planned, though the structure of that deal has not been ironed out. "We might do a partnership," he says.

The Lafayette station near Frank's would be Apache's first in the state, but the company has been aggressively promoting the use of natural gas in vehicles and building stations in other states to serve them. It also donated the CNG slow-fill, home-fueling unit at LOGA's office, which should be installed by August.

The CNG city buses, which cost $420,000 each, and the public fueling station are being funded mainly by state and federal grants and a $1 million state appropriation Lafayette Rep. Joel Robideaux helped secure. The federal grant money was funneled through the state Department of Natural Resources. Additionally, Louisiana has set up a revolving low-interest loan program for municipalities that convert their vehicles, with the loans being repaid by the money cities save on fuel. (To find out more about state and federal incentives, visit cngnow.com.)

"It's clean, it's affordable, it's abundant and it's American," says Briggs. "Everyone wants to move the needle. We have too much natural gas," he adds. And while the impetus for natural gas as an alternative to gasoline and diesel has certainly been its abundance, thanks to vast new reserves from finds like the Haynesville Shale and Tuscaloosa Marine Shale, price is the driving factor. You can save about $2 per gallon of gasoline equivalent.

And while it costs $10,000 to $12,000 more for a typical vehicle conversion kit, like the one used on Briggs' Expedition, the government incentives are mighty attractive. The state will issue you a tax credit for half of the additional cost of the CNG vehicle. Honda already has a Civic that runs on CNG, and Briggs says Hollingsworth Ford in Baton Rouge and Service Chevrolet in Lafayette have taken steps to convert fleets to run on CNG. Steelweld Equipment in Shreveport has been retrofitting a number of vehicles with CNG tanks for some time now. Last year Verizon contracted with Steelweld to convert 300 gasoline-powered Ford cargo vans to CNG, a move predicted to reduce vehicle carbon emissions by 23 percent.

Briggs says he now saves $16-$20 on a trip to and from Baton Rouge and is anticipating annual savings of about $4,000 a year.

"We would expect a fleet vehicle, with the tax credit, would take two years to pay off the difference," says Briggs, who is preparing to launch a series of seminars in late July, where he hopes to reach the scores of business owners across Louisiana who annually put 62,248 fleet vehicles and semi-tractors on the state's roadways. At 10,703, Lafayette Parish has the highest number of fleet vehicles in the state, he says.

Briggs is already working on his next CNG project - a slow-fill unit for his home, which will take roughly an hour to fill his tank with the equivalent of a gallon of gas that would cost him 75 cents. The unit is not yet available, Briggs says, but the minute it is, he'll get his hands on one. (It's supposed to be on the market in December; to get a glimpse of it, visit natgascar.com.)

That home unit will set him back about $4,000 but qualifies for a 50 percent tax credit from the state.

Just flip a switch, lay your weary head down to rest, and you're ready to roll in the morning.