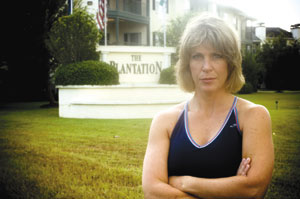 For the past two years, Lena Teacle has lived at Lafayette's The Plantation apartments, constructed about a decade ago on Liberty Avenue just off Kaliste Saloom Road. Single mother Teacle ' who works as a surgical technician in New Iberia and part-time yoga and pilates instructor at The City Club at River Ranch ' was able to afford the rent at The Plantation, commonly regarded as one of the city's nicer complexes.

That was before Hurricane Katrina.

Less than two weeks after the storm, the apartment's management asked Teacle if she was interested in terminating her lease early. Her lease expires Oct. 17. "I said, 'Why would I do that? I'd have no place to live,'" Teacle recalls. "Everybody in town was on waiting lists."

Two days later, Teacle got a letter from the complex informing her that her $850 per month rent would increase to $1,100 if she signed another six-month lease. If she decided to go month to month, it would rise to $1,245. The letter, dated Sept. 9, also informed her of the required 30-day notice of her intentions. In the past, rent also covered each tenant's water usage, but that would no longer be the case, she was informed.

Teacle was devastated. "I think we're being victimized because of the hurricane," she says. "We're secondary victims."

On Saturday, Sept. 10, the morning she received the letter, Teacle called the Louisiana Attorney General's price gouging hotline. "They don't consider that price gouging," she says.

Calls like Teacle's are inundating the A.G.'s office, which is still trying to sort through the deluge of complaints, most of which are coming from Lafayette and Baton Rouge, the two Louisiana cities that haven taken in most evacuees.

This latest round of controversy over Katrina even has some conservatives siding with trial lawyers. In recent weeks, the normally divided sides have each come out against what they perceive as gouging in the housing market post-Katrina.

"I'm a right-wing, Republican capitalist," says Tom Cook, Baton Rouge appraiser. "I believe in the market, but what is going on in a lot of cases is just wrong. You are taking advantage of someone's misery."

"We don't find any difference between people on Canal Street taking radios and what sellers are doing in the housing market. We call it suburban looting," says Baton Rouge trial laywer E. Eric Guirard, who has filed a lawsuit to stop the practice.

When his New Orleans office evacuated to Baton Rouge after the storm, Guirard wanted to buy a house in Plaquemine to temporarily shelter nine New Orleans attorneys, but the seller wanted to raise the price after the personal injury lawyer had signed the deal. That prompted Guirard to sue the prospective seller and the real estate firm for gouging. "We are hoping to make a point," he says, "and damages will be whatever the judge and jury find as appropriate."

To River Ranch developer Robert Daigle, it's an issue of fairness. If anyone who bought a home in River Ranch paid more after Hurricane Katrina than the list price before the storm, he wants to hear about it. Daigle sees a distinction between price increases resulting from the rise in building material costs, long-term supply and demand and what happened in Guirard's case. "I think there's a difference between reasonable price escalation and an unconscionable overnight increase in price," he says.

Knowing Lafayette's residential market would be strained immediately after the storm, Daigle, who is also an attorney, e-mailed his builders and warned them against any attempts at overnight windfalls.

But many claim that's just the market at work. In the wake of the doubling of gasoline prices this year, Washington, D.C.-based the Cato Institute, a non-profit public policy research foundation, recently issued a defense of soaring prices. The group says all businesses attempt to set their prices at the highest possible level the market will bear each day.

Louisiana economist Dr. Loren Scott says there is no such thing as price gouging. "I think that's just the market working," Scott says.

Price controls, he notes, cause a drop in supply. No gasoline manufacturer will sell products at prices below the cost of production, for instance. Price controls on gasoline have failed under Republican Richard Nixon and Democrat Jimmy Carter, the economist says. "Price controls always have perverse results. You always have shortages."

Plus, economically, it's difficult to define gouging.

Reports of sellers raising prices after the houses were already on the market are rampant. In Lafayette, however, the problem has turned out to be more rumor than reality, says Coldwell Banker Pelican Real Estate Chief Operating Officer Steven Hebert. "While I have certainly heard of some isolated instances, I have been pleasantly surprised by how little that has gone on," he says. Hebert ran stats the week after the storm and found that only 38 of more than 1,100 Multiple Listing Service properties had increased their asking price after the storm. On average, the increases were 8 percent.

Guirard's firm, on the other hand, wants to know just how bad the problem is across the state and is running ads to sign up clients who believe they've been gouged. More than 40 people have responded so far, and the law firm is sifting through the information before signing clients.

Louisiana's gouging statute is still too new to have been tested. Essentially, it's against state law to raise prevailing prices on "goods and services" during a declared emergency, such as Katrina. The attorney general, district attorney or parish attorney can prosecute violators. People convicted of gouging can be imprisoned for six months or $500, or both.

But the law does not specifically say that either real estate or lease contracts are covered, says Lafayette Consolidated Government attorney Pat Ottinger. "I could not give an opinion on whether it is a violation of the law," he says.

Guirard, however, sees the house defined as a "good" and the real estate transaction as a "service" under the law. He acknowledges there is no case law in Louisiana over price gouging in the real estate market. He says only homeowners who already had their homes on the market before the hurricane and raised their prices after the storm are likely liable under the law.

Baton Rouge attorney Stephen Babcock takes the opposing side. "In response to several inquiries from Realtors and brokers, we have studied the statute and believe the Legislature never intended real estate transactions to fall within the definition of goods and services," Babcock says. Goods are items consumed or bought for personal uses, family use or household purposes, which includes food and clothing, according to Babcock. "Services," meanwhile, are professional services, such as those provided by a doctor or lawyer.

Real estate transactions don't fit either category, claims Babcock. "First, real estate ' a house and land ' is not considered a consumable or a good. Second, in most cases the service provided by the real estate broker is on behalf of the seller not the purchaser. Furthermore, the broker's commission is usually paid by the seller, not the buyer."

Attorney Randy Roussel of Baton Rouge last week was drafting what he hopes to push as a state law or local ordinance that would cover real estate price gouging.

LCG does not have a local ordinance that addresses this issue, Ottinger says.

In all likelihood, market forces will sort out the mess, just as they have corrected gouging claims in the past. Appraisers are delivering values for homes that are below the offered prices, a turn that will make it difficult to close deals on homes that are considerably above market price.

For renter Teacle, some relief has come.

Jakob Medve, president of St. Louis-based The Medve Group, which owns The Plantation apartments and the adjacent Grove at Plantation complex, vowed to help Teacle and says he won't put any tenants out who can't afford the increase. "If we have to take care of 100 people, we will take care of them," Medve says.

Medve, however, claims the rent increase is not related to the hurricane. He explains that tenants like Teacle got "special" deals because the apartment market was overbuilt. Those price breaks are no longer being offered because of full occupancy resulting from ' you guessed it ' Hurricane Katrina.

Plantation has offered to raise Teacle's rent by only $50 a month.