Two large live oaks in the heart of Lafayette are gone.  Consolation: We get a new drive-thru daiquiri shop! By Walter Pierce

For a few days last week patrons at the Community Coffee House skirting North College Drive near Johnston Street - at least those foolhardy enough to endure the atmospheric stew and sit on the patio - got a double dose of aroma therapy: the calming scent of freshly brewed coffee and the rich, woody redolence of saw dust from two large live oak trees across the street that met the business end of a company called Mike Hollis, The Tree Undertaker. Seriously. The Tree Undertaker. 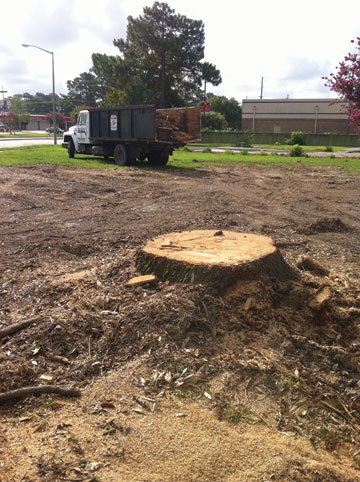 Two large live oaks in the heart of Lafayette are gone.  Consolation: We get a new drive-thru daiquiri shop! By Walter Pierce

For a few days last week patrons at the Community Coffee House skirting North College Drive near Johnston Street - at least those foolhardy enough to endure the atmospheric stew and sit on the patio - got a double dose of aroma therapy: the calming scent of freshly brewed coffee and the rich, woody redolence of saw dust from two large live oak trees across the street that met the business end of a company called Mike Hollis, The Tree Undertaker. Seriously. The Tree Undertaker.

There's some question about whether the trees came down through natural necessity - disease or acts of nature - or economic exigencies. But there's no question that in a community that cherishes such fabulous flora, that fights to preserve it, the loss of these two trees is just that: a loss.

The triangular property wedged between Meaux Boulevard and North College behind the Walgreens on Johnston Street was, until Feb. 22, zoned transitional business, or B-T. Early this year, the family members who own the property - the grandson of the original owners, his wife and another person - applied to have the property rezoned to general business (B-G). Those zoning classifications are important: B-T is much more restrictive in the types of businesses that can set up shop, while B-G opens up a property to restaurants, bars and, yes, drive-thru daiquiri shops. We needn't remind you, yet we will, how outsiders marvel at these celebrations of Saturnalia, which exist only because a loophole - specifically a strip of cellophane tape over the straw hole on the cup lid - allows them to do an end run around the open alcohol container law.

Since North College was cut through Meaux Subdivision from Johnston Street to Bertrand Drive in 1983, the city's (and now consolidated government's) Zoning Commission has declined every request for a B-G zoning on the west side of College because it skirts a residential area. In requesting the rezoning to B-G, the lot's owners indicated in their application that they planned to "develop the property in such a way that will not injure or harm the value of the property and will keep intact the integrity of the landscape."

Several people living near the property, including across Meaux Boulevard from the lot, submitted letters to Zoning opposing the reclassification.

On Jan. 24 the Zoning Commission followed precedent and voted 4-1 to deny the property owners' request for the reclassification; Lafayette Consolidated Government's Zoning Department staff had likewise recommended the request be denied. However, on Feb. 1 the rezoning request went to the City-Parish Council as an introductory ordinance. The ordinance was approved in globo (among a batch of intro ordinances voted on at once; standard council procedure).

Why do we have a Zoning Commission again? Never mind.

On Feb. 22 the rezoning ordinance for 106 Meaux Blvd. went before the CPC for a final vote. At that meeting, Jim Parker, LCG's zoning manager, told the council: "We felt that the nature of the neighborhood and with the residences that are still in place, and the fact that it's B-T now and could be redeveloped to support a business use, we didn't support the rezoning."

In her plea before the council that the ordinance be approved, Suzanne Brevelle Meaux, one of the co-owners of the property, reiterated that the trees would be spared and that the new business would be a quaint, cottage-style building designed to complement the nearby residential area: "We do intend to uphold the integrity of the property, not degrade it, and keep it in with the surroundings," she told the councilmen, adding later, "We do not intend to cut down the trees. We feel that that is a primary focal point for us."

It wasn't until Councilman William Theriot asked her what type of business the family planned to put on the lot that Meaux acknowledged it would be a daiquiri shop.
The council voted 7-2 to approve the rezoning. Theriot and Don Bertrand voted against it.

Now, four months after that decision by the council to ignore the recommendation of the Zoning Commission and Zoning Department, the trees are gone.

Meaux maintains the family intended to keep the trees, especially the one near the tip of the lot that, estimating from satellite photos, had a roughly 75-foot canopy: "I think we're going to put up a sign that says, Nature Did It, We Didn't'," she says. "It split down the middle, and we called an arborist to see if there was any way to save it, and too much of the core was split; there was no way to patch it or anything. Believe me, we tried every possible avenue we could before they cut it down."

Meaux can't recall the name of the arborist who inspected the tree.

She says the tree closest to Walgreens "had some disease," and an inspection of the discolored trunk by The Independent before the stump was ground into mulch on Wednesday of last week does seem to confirm that claim. The other trunk, however, appeared healthy, and Jim Foret, a UL instructor and widely recognized live oak expert, questions whether the tree could have been spared, based on his observations. Foret didn't, however, inspect the tree up close.

"It lost a large limb toward CC's," he recalls. "It dropped a limb due to a defect in the lower branches. That may have panicked the owner into thinking they had to take it down, but as far as I'm concerned that happens to live oaks all the time. It's avoidable, but in this case it split out, and I guess it didn't look as pretty."

Son of the late horticulturist J.A. Foret, a former dean of the Agriculture Department at UL who was responsible for planting many of the now-mature live oaks on campus, Foret estimates the trees on the Meaux Boulevard lot were 40 to 50 years old.

As of last week councilman Bertrand, a Lafayette native, hadn't seen the bare, gnawed-up lot where the oaks once stood. "I imagine I'll be more disappointed when I do see it," he says.

Let's hope the owners stick to their pledge to put something on the lot that complements the adjacent neighborhood and that they provide attractive landscaping. The B-G zoning classification will require them to add landscaping, but they aren't held to sticking to the original architecture plan. Meaux, however, says they plan to do just that.

But the owners will not be required to replace the live oaks with the same species; in 2001 when the loss of trees in Lafayette due to rapid development was raising the proverbial pitchforks of the townsfolk, an ordinance that would have required in-kind replacement of live oaks felled for commercial development was proposed but never adopted.

That still sticks in Foret's craw. "They want to put concrete everywhere - a typical sad Lafayette story," he says. "They don't have a real sensible plan for keeping trees and keeping the environment cool. It's a sad thing that we can't work that out where people can still make a living."

What we're left with at 106 Meaux Blvd. is as stark as the juxtaposition: Gone is one of the best things about Lafayette, to be replaced by one of the worst.