Of the $211 million Lourdes invested in its new hospital, almost $30 million was spent on technological advancements.  By Lisa Hanchey

It's unlike anything Lafayette has ever seen in a medical facility.

When you enter Our Lady of Lourdes' new 396,000-square-foot facility off Ambassador Caffery Parkway, you'll think you're in another city. This $211 million state-of-the-art facility is comparable to those found in medical meccas like Houston and Dallas. Just on technology, the hospital spent $28.5 million. 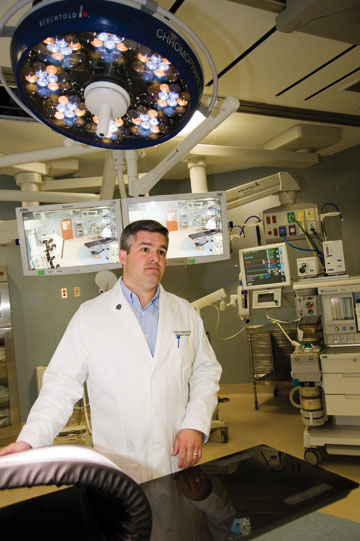 Of the $211 million Lourdes invested in its new hospital, almost $30 million was spent on technological advancements.  By Lisa Hanchey

It's unlike anything Lafayette has ever seen in a medical facility.

When you enter Our Lady of Lourdes' new 396,000-square-foot facility off Ambassador Caffery Parkway, you'll think you're in another city. This $211 million state-of-the-art facility is comparable to those found in medical meccas like Houston and Dallas. Just on technology, the hospital spent $28.5 million.

"It's a whole new day and age for health care in the U.S.," says OLOL President and CEO Bud Barrow. "I think it's impossible to offer 21st century solutions to health care in 20th-century-built boxes," he adds, making a thinly veiled reference to Lourdes' closest not-for-profit competitor, Lafayette General. While Lourdes abandoned its existing site in favor of a new facility, Lafayette General, followed a different track and undertook a complete renovation of its existing facility. "I don't think it's possible to simply renovate to meet the demands of the 21st century health care challenge," Barrow says. "You have to innovate. And, I think that requires ground-up design."

Overlooking the sleek lobby's waterfall is the information desk, the central check-in for imaging, testing and surgical procedures. After a patient registers, family members and visitors receive pagers, allowing them to roam the hospital without missing the doctor's all-important update. During procedures, they can track a loved one's progress through surgery status boards. "You can follow the patient along so you'll have a level of comfort with the technology to know where he/she is," explains OLOL's community relations director, Elisabeth Arnold. "Hospitals are kind of an intimidating place when you are trying to navigate them. So, what we are trying to do with the design process is simplify that and make it as efficient as possible."

Beyond the waiting area is the procedural platform, a $14 million technology investment in surgery, procedure rooms and imaging equipment. Inside are four endoscopy rooms, a specialized cytology room, cath/specials lab and a comprehensive electrophysiology lab. High-tech imagining equipment includes two 64-slice CT scanners and the only all-digital radiographic program in Acadiana. Additionally, Lourdes possesses Lafayette's sole 1.0 strength high-field open bore MRI with ambient features. Ambient light projects different images, including pediatric themes, to relax patients during an MRI. Once the test is complete, results are transmitted to a physician's office in less than three hours. "With the technology that we have here at Lourdes hospital and the Lourdes Imaging Network, we will have the most capacity for imaging in the region, in terms of the amount of machinery that we have invested in," Arnold says. "We'll also have the opportunity to have the most precise imaging in the region, from the 1.0 open bore to a 3T MRI in our medical office building next door."

The procedural platform houses eight operating rooms, 18 emergency department rooms, 10 flex rooms (used for procedures as well as extra ER beds) and 24 intensive care rooms. One of the ORs is dedicated to highly specialized neuro-interventional  procedures. But, the pièce-de-resistance is the surgical hybrid suite, a space-age looking room with a C arm for radiographic fluoroscopy, ceiling mounts/booms for equipment, LED lighting, telemedicine capacity and the only Maquet Magnus surgical table in the state. "Hybrid means that it's not only an operating room, but it also has cath-lab type abilities," explains Director of Surgical Services Kate Oliver. "If you were to do angiography on a patient, you could do that here because of the C arm and all of the different monitors that would show it."

With the Maquet Magnus surgical table, doctors can perform fluoroscopy through the C arm. "It actually does it like an X-ray; everything's radiographic fluoroscopically, so that you can see it on the monitor right then and there," Oliver says. "It's not necessary to take the patient to X-ray." The Maquet also tilts and has an interchangeable tabletop, allowing specialists to perform a wide range of cases, including cardiac, bariatric, orthopedic, neurologic and trauma.

Above the procedural platform are the patient rooms, which are 30 percent larger than those at the St. Landry campus. The hospital spent $3 million of its technology budget on bedside equipment for monitoring blood pressure, pulse, oxygen levels and temperature. Besides decreasing the risk of infection from room-to-room transfer, this equipment allows health care personnel to watch a patient's vital signs from the nurse's station or doctor's office. Additional monitoring in acute care units alerts the nurse when a critical value needs to be checked. "It will actually telephone the nurse, who has a phone clipped to her belt, if there is a critical value that she needs to check on," Arnold says. "So, if she doesn't answer, it rolls to another number, and makes sure that a nurse gets to that room as soon as possible."

Unlike most hospitals, which require patients to wait for medications from the hospital pharmacy, Lourdes gets meds to patients much faster. A medicine supply machine (that works much like a vending machine) is stationed on all nursing pods and is stocked daily with the forecasted medications (about 90 percent of them) needed for patients on that unit. The nurse has to input a patient I.D. and her fingerprint to securely access the machine. 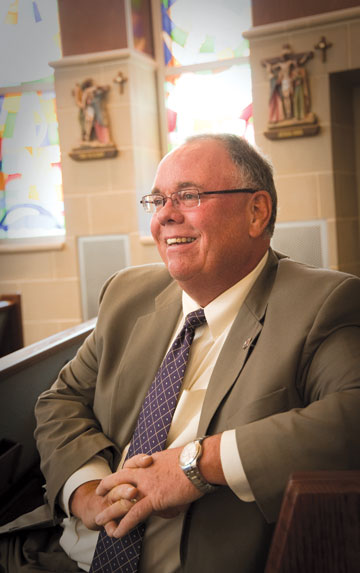 Patient rooms offer the comforts of home, including flat screen TVs with network connectivity. From the bedside, patients can access movies, the Internet and health education videos.  At mealtime, the "At Your Request" food nutrition program allows patients to order meals with assistance of the hospital's nutrition staff.  "Basically, it is a room service dining concept," Arnold explains. "So, for example, if you had to fast for a test and missed breakfast, you can call the nutritionist, who can work with you to navigate your choices in terms of what your physician has ordered for your prescribed diet. If you want to tell them the day before, you can prescribe whatever you like and what time you'd like it delivered. You can even order for someone from your office if you are the designee within the hospital environment and have it delivered when you will be there."

This hospital was designed with the patient and the future in mind. "We literally asked probably a hundred-plus different stakeholders, If I was a nurse, what would I want? If I was a doctor, what would I want? If I was a patient, what would I want?'" Barrow says. "We even asked ourselves this question - If I was the administrator of Lourdes in 2030, what would I have wished that these people had done in 2011?' And, when you ask those kinds of questions, it's impossible to do that just through renovating for the next five to 10 years. It's the difference between a train and a plane - they're both transportation, they'll both get you from point A to point B. But, we need jet planes. And that's what we've built here."