PERFECTLY SHELLED
The old saying that as one door closes another one opens is fitting for Tamara Miles. The closing of Jefferson Street Market - where she was a vendor and employee for about eight years - was the impetus for Eclectic Design, her Oil Center store located in the spot formerly occupied by Atelier on Coolidge Street. 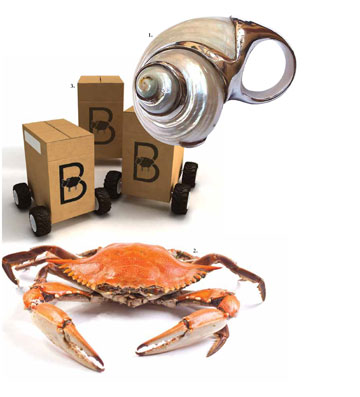 PERFECTLY SHELLED
The old saying that as one door closes another one opens is fitting for Tamara Miles. The closing of Jefferson Street Market - where she was a vendor and employee for about eight years - was the impetus for Eclectic Design, her Oil Center store located in the spot formerly occupied by Atelier on Coolidge Street. The shop's diverse inventory includes an impressive collection of local artists' works (the current featured artist is Melissa Bonin), area jewelry designers, European antiques and contemporary pieces. The store's unusual - some one-of-a-kind - jewelry pieces caught my eye, in particular Shreveport designer Mary Caroline Spano's oversized polished pearl Turbo shell ring set in sterling silver. "Rather than making the setting and then popping in a centerpiece, the sterling setting was made by hand to surround the shell," says Spano, who traveled to Bangkok and met with skilled artisans who helped execute the stunning design. "I was very pleased with the marriage of this simple shell into a fabulous piece of jewelry," adds Spano, whose pieces incorporate natural elements like freshwater pearls and semi-precious gemstones, as well as recycled objects and various metals. The collection ranges in price from $36 to $400 (the shell ring is on the upper end at $365). "I could see this ring at a black tie event worn with a simple gown or at a fun and casual cocktail party on the water," the designer says. Find Eclectic Design on Facebook or call the store at 337-534-4841. - Leslie Turk

CRAB TRAP
This special won't work for anyone who can't bust out of the office before 6 p.m., but it's well worth the effort to do so. Randol's Cajun Restaurant on Kaliste Saloom Road has a daily boiled crab special - as in seven days a week - from 5 p.m. to 6 p.m. You get a half dozen well-seasoned crabs for $9.99; pair the order with a mug of ice cold draft beer for $1.99 and be sure to ask for the crawfish dipping sauce because it's terrific. (Our waiter even offered replacement crabs in case one wasn't full; that was not at all a problem - they were loaded!) It's dine-in only, and potatoes and corn are extra. You might even want to hang around for a while, as the chank-a-chank gets under way about 6:30 p.m. - LT

GOOD BLACK SHEEP
Finally, virtually anything in Lafayette can be delivered right to you by a premiere courier service called The Black Sheep Couriers. It's owned by Jennifer Dewey and Cory Hebert who share six years of experience in the courier service and are the company's two runners - always available for deliveries along with a few in-case-of-need runners. Whether your packages are delivered via bike, car or on foot depends on the distance of the delivery, but they are willing to deliver anything from birthday cakes, party supplies, groceries, legal documents and dry cleaning to forgotten cell phones, takeout or anything else that will fit inside a 4-door sedan. They also offer special services for businesses and legal firms like daily mail runs and acquiring signatures. Discounts are offered to account holders and those who use the service several times each month. To get an estimate for what you want delivered, find them online at www.TheBlackSheepCouriers.com, on Facebook and twitter @runblcksheeprun. - Wynce Nolley