StoryCorps rolls into Lafayette to record the everyday stories of everyday people for inclusion in the Library of Congress. 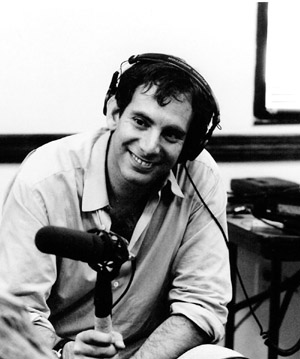 A New Orleans man tells his friend of an encounter with a stranger on a street car during the days of segregation that changed his life forever.

An elderly New York man with Alzheimer's tries to remember the names of all of his children, even though two of them sit before him.

In Kansas City, Mo., a 15-year-old girl with Down Syndrome asks her father, "Dad, how did you feel when I was born?"

They are conversations between family members and friends ' amusing anecdotes, painful recollections, gripping narratives, joyful memories and humorous asides ' and to date, StoryCorps has recorded nearly 10,000 of them.

On Feb. 8, StoryCorps will roll into Lafayette and set up shop at Parc Sans Souci through March 3. Local public radio station KRVS 88.7 FM will host and support the crew during its stay.

StoryCorps began in 2003, in a soundproof booth in New York City's Grand Central Station. Two friends or family members sit down with one another and talk for 40 minutes. There's no required format to follow. Either one person interviews the other, both interview one another, or they simply talk. Neither participant needs to be an expert on interviewing techniques or a particular subject, just willing to either answer questions, ask them, or both. StoryCorps even offers pointers on preparation through its Web site, www.storycorps.net.

Judy Rowland of Richmond, Texas, a retired school librarian, recently interviewed her husband Thomas as a part of the project. She spoke with him about their early married life, nearly 40 years ago, while he was enlisted in the Navy and stationed in Guam, while she attended The University of Guam. "I just wanted to get it on record," Judy says. "I'm just a human being. I'm an American. ... It's so important just to document individual human stories."

Says founder Dave Isay, "The idea of StoryCorps is that our stories, the stories of regular people, are as interesting and important as the nonsense about Lindsay Lohan and Paris Hilton and all this crap that we're fed all the time. If we spend a little more time listening to each other and recognizing the value in each other's stories, and less time screaming at each other on talk radio, we'd be a better, more thoughtful country."

The foundation for StoryCorps was laid more that 20 years ago when Isay was a medical school student who'd produced a story for a New York radio station. A representative from National Public Radio heard his segment and picked it for the national network. Isay dropped out of medical school and continued to produce audio documentaries. In 1994, he formed the nonprofit company Sound Portraits Productions.

In May 2005, StoryCorps began using two mobile recording sound booths they call MobileBooths. The soundproof Airstream travel trailers are equipped with recording equipment and travel across the country, setting up shop and recording interviews. Conversations are recorded by a StoryCorps facilitator. One copy goes to the participants, and the other copy is archived with the American Folklife Center at the Library of Congress, as part of a national oral history project. Some of the conversations even find their way onto segments of the NPR program Morning Edition.

"You talk about whatever you want to talk about," Isay says, "but most people ask the big life questions." Commonly asked questions include the most important lessons learned in life and how one wants to be remembered. Isay suspected that after a number of years, the stories that StoryCorps collected would begin to repeat themselves. But what he's learned is that while the themes may be the same, the variations on those themes are endless.

"People are basically good," Isay says. "I'm learning that everybody, no matter where you are in the country, we share so much more than what divides us. When people get in the booth, they talk about the three most important pieces of life ' which are birth, death and love ' and there's this rainbow of stories that emerge from those three topics. But really, no matter where you come from, no matter how much money have, no matter what color you are, from the big city to the smallest hamlet, the kind of things that matter to people are very much the same."

Andrew Wilson has heard at least 100 of these stories within the last six months, sometimes six to eight of them a day. As a StoryCorps facilitator, he mans the recording equipment and takes notes for archiving the recording with the Library of Congress. "Having done a lot of these interviews," Wilson says, "I realize how infrequently we sit down and talk about something with another person for 40 minutes without having a phone ring or someone interrupt us or changing the subject because the time doesn't seem like the right time to talk about something important. I hope that people will have a great conversation while they're in the booth, but then also that they'll leave and go home and the conversation will continue. People call and write to us and tell us that's what happened, and that's always rewarding to hear."

The small soundproof space inside the trailer makes for an intimate environment where participants sometimes broach subjects they might not discuss in an ordinary setting. "The facilitators call it the magic of the booth," Isays says. "StoryCorps tells people that they matter and they won't be forgotten. Everybody wants to know that. Most people, even the difficult and cantankerous, they just [tell their stories]."

Isay initially conceived of StoryCorps as a 10-year project, but as he began to hear the collected stories and the stories of how individuals were affected by the experience, he scrapped the idea of a fixed time period. Now it's his life's work to make StoryCorps a permanent national institution.

"The fact that we listen to other people's stories, actually listening to a family member in this age of BlackBerries and running around and distraction, just the act of listening is an important way to spend time," Isay says. "Stories remind us how precious each day is and how lucky we are to be alive. So in some way, they're the most important things of all. Stories are our history. It's where we come from. And I think these stories can serve to kind of shake us out of our reality TV-induced haze and help us remember what's important. I think it's very important to recognize that there's value in every single person's story, that everybody's life matters, and when you listen to other people's stories, you realize that. I also think that when you listen to other people's stories, you really recognize our shared humanity and the fact that there is so much more that we share than divides us."

Reservations are required to conduct a StoryCorps interview and can be made by calling (800) 850-4406. The suggested donation for each interview conducted is $10. For more information on StoryCorps, and how you can conduct your own interviews of family and friends, visit www.storycorps.net.