Cartoonist Garry Trudeau is making fun of Louisiana and, frankly, we darn well deserve it. 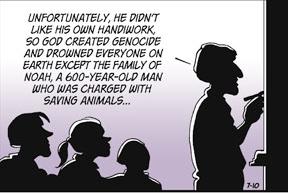 Cartoonist Garry Trudeau is making fun of Louisiana and, frankly, we darn well deserve it. In Sunday's Doonesbury strip, Trudeau casts a humorous albeit exaggerated light on the Louisiana Science Education Act, the 2008 state law allowing public school science teachers to introduce "supplemental" materials to the standard curriculum. The act has been widely attacked by mainstream science organizations as a means for creationists and supporters of Intelligent Design to insert pseudo-science into classrooms.

The LSEA withstood a legislative attempt at repeal during the 2011 session that was supported by, among many others, more than three dozen Nobel laureates in the sciences.