Opelousas' mayor says he's pleased' and comfortable' with an audit of financial transactions in his city, despite that it uncovered ethics violations and criminal conduct in his administration. Will he be as dismissive if federal investigators come calling?

Opelousas' mayor says he's pleased' and comfortable' with an audit of financial transactions in his city, despite that it uncovered ethics violations and criminal conduct in his administration. Will he be as dismissive if federal investigators come calling

That's the sentiment of Opelousas Mayor Donald Cravins about the results of the Louisiana Legislative Auditor's report on his city's operations. The compliance audit, released publicly last week, had been in Cravins' hands for more than a week, awaiting his response to the findings.

The Independent interviewed the mayor - a former state senator - before the audit was made public, inquiring about whether there were any serious issues raised that concerned him. "We have, what I think, more procedural stuff than anything of substance," Cravins said at the time. "A lot of procedures we really didn't have in place. I was pleasantly surprised really because they were there for about three months. They spent a lot of time. The whole report is a little over nine pages."

So imagine our surprise when the report finally saw the light of day: Felony theft, payroll fraud by a department director, payment for contractual services without a written contract, no competitive selection process for contracts, bid law violations, free rent of public buildings for city employees (including a freebie for City Attorney Pride Doran for a political fundraiser; it was the mayor's office that requested the waivers), cash from scrap metal sales not deposited in the city's account for months, poor controls, no controls. Even when policies were in place, the city routinely violated them.

Most problematic is that a number of the issues cited appear to lead directly to the mayor himself, particularly his relationship with a construction contractor who has a long history of winning public jobs through a process that circumvents state bid laws.

The state's director of compliance audit doesn't take the findings near as lightly as the mayor. "They're troubling," says Dan Daigle, who has 15 years of experience with the state legislative auditor's office. "Obviously, I've seen worse, but these are troubling."

Auditors noted that a then-city employee, whom Cravins had also appointed to the Opelousas Housing Authority, billed the city while he was out of town on trips for the housing authority, identifying 68 overlapping hours valued at $1,180. Mike Levier was named assistant code enforcement officer for the city in January 2006 and three years later was named interim director of the Office of Community Development. Most of the overlapping hours occurred when the mayor was signing his time sheets (Levier was terminated for poor work performance in January 2010, in part for leaving the state for an unspecified period without notifying the city, according to the audit).

"Levier took time off. He was paid for time he took off that he wasn't entitled to. You want to call that procedural?" Daigle asks. "We have problems with the way they collect cash. When we start questioning it, the cash is then brought back (by Public Works Supervisor Leonard Hammond, who was fired and arrested during the audit). You have city buildings that are being rented, in some cases given to public employees and the general public. I would say that's a problem. The whole report, I'd say, has got problems."

The audit also found that two contractors, Charles and Beulah Renaud, are each paid $600 a month for "public relations" work, yet the city has no written contracts spelling out their responsibilities, and neither submits supporting documentation for the work they are doing. It also appears that there was no competitive selection process for choosing the contractors.

Who approved the retainers? "It says here one of them was special projects and constituent liaison to the mayor," Daigle says.

Daigle confirms that the report has been turned over to the state attorney general and St. Landry Parish District Attorney Earl Taylor.

The Independent has learned, however, through a source familiar with the investigation into Opelousas' operations, that the FBI subpoenaed records from the legislative auditor's office at some point in the review process, but the paper has not been able to determine the nature of the FBI inquiry.

The FBI will neither confirm nor deny whether such a probe is under way, and auditor Daigle was equally mum. "I can't talk about that," he said. "We can only talk about what's in the report."

On the matter of that popular construction contractor, the mayor wasn't entirely candid with this newspaper. Asked whether the name Anderson Iron Works - the Duson company that got the lion's share of work from both the Lafayette Housing Authority and the Opelousas Housing Authority - would come up in the audit, Cravins said he could not talk specifics until it was released.

Anderson Iron Works did indeed surface in the audit, and auditors - just as they did with the two housing authorities - once again pointed to likely violations of state bid law. On its website, Duson-based Anderson Iron Works says it's been in business since 1990, providing services that include welding repair and fabrication, machining, heavy equipment repair, metal sales, trailers and hitches. Except in an emergency, the state's bid law requires written contracts for all public works projects over $5,000. "None of the public works projects performed by Anderson Ironworks was supported with written contracts including seven projects in excess of $5,000," the auditors wrote, also noting there was never any documentation of an emergency to justify expediting the jobs.

But that's only the beginning; the city paid Anderson half of its $42,000 bid for a new roof and siding on the city library the same day the bid was submitted. State law prohibits advance payments for this type of work and requires contractors on public works projects in excess of $25,000 to provide a bond of not less than 50 percent of the contract amount as protection against potential claims from subcontractors and others. There was no such bond posted on the library project.
The Independent asked the mayor if he had any kind of "relationship" with Floyd Anderson or his son, Kendall Anderson, who owns Anderson Iron Works. "None whatsoever," he said.

Do you know the Anderson family very well? "Oh, I know them, I've known them for years. But, I mean nothing more than that; I've known a lot of people for years, but no, no relationship."

In a 2008 review of the LHA's operations, independent auditors noted what appeared to be egregious violations of state bid law: Two of three contracts tested had work performed before the contract date and due date for the bids; no dates on bids to determine when they were received; a review of several other contracts for the same vendor, Anderson Iron Works, revealed that all work was done before contract date and bid due date; of the 30 contract files all but four or five were awarded to Anderson Iron Works, the low bidder on almost every single contract - though the work was done before the bids were due. A year later, it was more of the same: In a test of three contracts covered under the Davis-Beacon Act (a federal law requiring that prevailing wages be paid on public works projects), work on two contracts was started before the contract date and the bid date.

The OHA's new executive director, Joe Ann Tyler, confirms that most OHA projects were also awarded to Anderson before she took over; she could not find a single instance where the agency followed state bid law in awarding the work.

Scathing independent audits of both Lafayette and Opelousas' housing authorities led state auditors to those agencies, both of which are now the subject of FBI and Housing and Urban Development inspector general investigations. 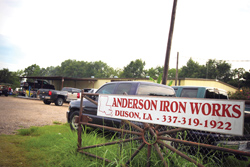 Cravins, who appoints the OHA's board and has come under fire for appointing city workers, maintains he did not influence its operations. "I never once attended a meeting of that board. When I took office there were two city employees on that board. I have never called [former Executive Director] Walter Guillory, ever, to ask him to give anybody any preference or to give anybody any work because I didn't meddle in their business. Never called him to talk to him about contractual work, never. I can tell you I had enough to do otherwise."

Others say that's just not true. "Cravins had lots of control over the Opelousas Housing Authority," says former LHA commissioner Donald Fuselier, who says it was Cravins who recruited LHA Executive Director Walter Guillory to Opelousas while he was still full-time in Lafayette. "I told Walter not to get involved with in that, with those politicians, but he's a grown man," Fuselier says.

The legislative auditor questioned the legality of Guillory's dual position, the excessive salary that came with it and contractual payments to Guillory when he left Opelousas. When he was doing double duty, Guillory's salary alone from both agencies reached $242,000, the auditors noted. He resigned from the LHA in the wake of the investigations and is reportedly cooperating with federal authorities.

Cravins did not return a follow-up phone call after the audit was released.

Kendall Anderson, who also did not return phone calls for this story, last week told The Daily Advertiser that Cravins personally called him for a quote on the city library project (in his response to the audit, Cravins says the library project was an emergency job because slate tiles were falling from the roof, creating a liability issue). The mayor, however, told the Advertiser he does not remember placing that call.

The housing authority fiasco involving both Lafayette and Opelousas, and now an equally troubling audit of Opelousas, has a common thread: the trio of Walter Guillory, Mayor Don Cravins and the Anderson family. But what those parties were up to is still anybody's guess.

"Floyd is like a family member to Cravins," says Fuselier, whose first cousin is married to Floyd Anderson. "Everyone knows that. He can't deny that."

Nice work if you can get it

Albert Simien is a lucky man. He pockets $1,200 a month to transport two Opelousas residents to dialysis treatments on Tuesdays, Thursdays and Saturdays - in a city vehicle whose tank is filled by a city-issued Fuelman card.

Simien is not required to present any documentation for his service, indicate who is enrolled in the program or prove that they qualify. There also is no record of the city ever approving the practice.

While the state constitution "allows for welfare to the public," auditor Dan Daigle says, there must be a documented program in place to provide this type of service. "I think if the parish has a plan that it can show that the person is destitute and can't afford it, that it's in the best public interest to expend the funds in this manner for this person, then I think it's constitutionally permissible. But there must be a plan. You just can't give money away." Even with such documentation, Daigle - like most reasonable people - believes $1,200 a month to transport two patients "seems like a lot to pay."

State auditors questioned this expenditure and exposed other potentially unethical and illegal practices after acting on information the office received about alleged improper use of public funds by the city of Opelousas. The state reviewed available city records for about a three-year period and conducted interviews with employees and other parties. The Louisiana Legislative Auditor posts its audit reports, along with management's response, online. View independent and legislative audits of the LHA, OHA and city of Opelousas at http://www.lla.state.la.us/. - LT