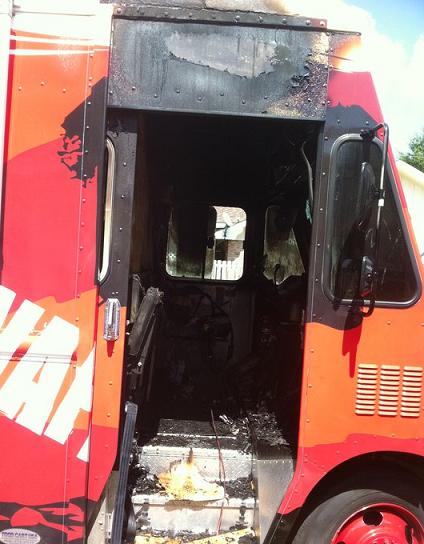 Viva la Waffle is the brand spankin' new food truck rolling through Lafayette offering up sandwiches, desserts and more all conveyed through the spirit of waffles. Colin Cormier, chef and one half of the ownership and brains behind the mobile enterprise, was home on Saturday when the worst happened. It was about 2 p.m. and Viva la Waffle was about to roll out to the grand opening of Genterie in downtown Lafayette. "I had been in it five minutes previous," he says, "when my doorbells started to go crazy and it was my neighbor telling me my truck was on fire." Cormier says he owes a huge debt to the Lafayette Fire Department who got there very quickly. "Otherwise it might have been a total loss." Between Cormier and his neighbor attacking the fire with hoses from their houses and buckets of water and the fire department's final acquittal of the blaze, only the truck's cab was affected.

This means, Cormier says, that "all wiring will have to be pulled and re-ran. The engine and the kitchen are fine but the dashboard, the seats and the electrical system are gone." Although no one can definitively know when Viva la Waffle will reopen until the fire inspector and a mechanic take a look, Cormier is hopeful to be up and running again by Labor Day. He says he'd like to have a grand reopening at the fire station on Ambassador Caffery that saved his truck, as a way to say thank you. Viva la Waffle is often serving behind the Burger King near campus, off of St. Mary but you can find where it is most easily through the Twitter feed here.

Down the road a piece, iconic Jeanerette eatery Landry's Seafood and Steakhouse caught fire about 12 hours later. It took several hours for the blaze to be subdued. Although it isn't yet known what started the fire, the Landry family is hopeful to reopen it in the next few months. Extensive smoke and water damage throughout the entire structure.

Look for The Independent to visit both of these valuable locations when they open back up.