The sno-cone machine is a Louisiana invention, and there is no shortage of choices in Lafayette to beat the heat and paint the tongue. By Anna Purdy

Snowballs, snoballs, snow cones, sno-cones or the adult version: drive-through daiquiris. Whatever you want to call it or however you spell it, it's needed in a Louisiana summer.

The sno-cone machine is a Louisiana invention, and there is no shortage of choices in Lafayette to beat the heat and paint the tongue. By Anna Purdy - Photos by Daniel Landry 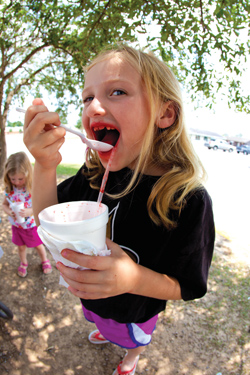 Snowballs, snoballs, snow cones, sno-cones or the adult version: drive-through daiquiris. Whatever you want to call it or however you spell it, it's needed in a Louisiana summer.

Snowballs are as native to Louisiana as crawfish and tropical storms. With snowballs, everybody wins: since they are simply ice and sugary flavoring they are cheap to produce, and because it's hotter than the hammered down hinges of Hades during these solstice days in Louisiana, the consumers gain a brief and tasty respite from the summer sun, at least in their mouths.

The invention of the snowball machine is credited to George J. Ortolano, a New Orleans grocer. Starting around 1936 and utilizing his mechanical know-how - figuring that using a hand-planer and a block of ice to make a sno-cone would really be an awful thing to have to do multiple times a day like the other stands were doing - he invented the first snowball machine.
Called the Snow Wizard, it produced a treat more finely wrought than traditional sno-cones. After George's wife Josie began to use supplies from their grocery store to make unique snowball flavors, they really took off. Now shortened to SnoWizards, they are still being manufactured and sold today, and the company remains in the family.
In honor of this uniquely Louisiana summer experience, here are just a few of our favorite sno-cone stands in Acadiana.

BABE'S SNOWCONES
916 S. Main Street, St. Martinville
For about 55 years this snowball stand had no sign, but everyone knew it as Pearl's. Pearl Prade owned and ran this shop herself until breast cancer took her a few years ago; it stands in the front of what was Pearl's house. Now her nephew, whom everyone calls Babe, runs the stand, and although he's added a sign, he's kept the same sharply flavorful ice that has had locals walking, biking and driving to this end of St. Martinville for several decades. Babe's is located next to a steel shop, so the blades for the snowball machine are kept sharp; the result is whisper-fine ice. The building is bluish-green and striped like candy, and when summer comes to call, Babe's answers, throwing open the windows on the tiny stand to scores of folks looking to cool down. My own mother has been going there since she was a girl when her favorite flavor was lemon. Now that she is a retired professor her favorite is margarita, arguably the grown-up version of her girlhood choice. 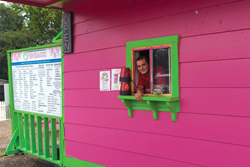 Speaking of grown up, O'SNEAUX is a modern version of a snowball. It features sugar-free and organic flavorings so those who leave the gym and want to sneak a treat don't have to beat themselves up about it. Located across from Brother's on the Boulevard, O'SNEAUX has everything from the tried and true to energy drink flavors. It also serves up frozen pickles, ice cream, hot dogs, nachos and Frito pies. I imagine the last three on this list do not come with an organic option. O'SNEAUX can cater, too, which is great for summer parties. Open daily 1-8 p.m.

OLD TYME SNOWBALLS
218 West St. Mary, Lafayette, 235-8165
Located behind Old Tyme Grocery, you can order one of the poboys Old Tyme is famous for then walk around back for a snowball. If you drizzle enough Louisiana Gold on your poboy, the cool sweetness of Old Tyme's snowballs is pretty rad. You can get a straight-up snowball - flavoring over ice - or you can get it "stuffed." A stuffed snowball, for the uninitiated, means ice cream in the middle or a healthy coat of condensed or evaporated milk, part of the delicious reason why Louisiana is near the top of the national obesity chain.

CAJUN SNO
4303 Johnston St., Lafayette, 981-3342
This is one of the best-known snowball stands in Lafayette. Lines are usually backed up during the dog days of summer, but they go fairly fast and it gives you time to digest the menu and make your pick. There are organic flavors as well as sugar-free, or you can just throw caution to the wind and ask for some condensed milk on top. 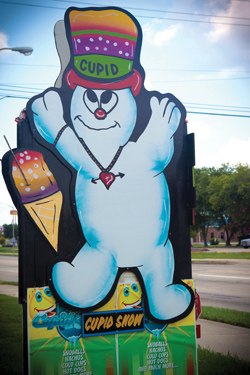 CUPID SNOW
320 W. Willow St., Lafayette, 456-3051
Right off the Thruway there is a stand put up after Lafayette's Cupid became famous for his shuffle. Once known as UL athlete Bryson Bernard, Cupid opened the stand a few years ago on Lafayette's northside, and it's been a growing success ever since. At first the offerings were simple - you could get a snowball and a hamburger for $2 plus tax. The prices haven't really gone up, but the menu has certainly expanded. Now you can choose boudin, stuffed bread, poboys, porkchop sandwiches, hot dogs, daily plate lunches or Frito pies before you pick from more than three dozen different sno-cone flavors. There are the standards like grape, cherry and watermelon, and then there's the unusual - flavors like dill pickle, Creole cream cheese, egg nog and the favorite of kids everywhere: dinosaur.