VILLAGE CHOICE
Sandwiches like the Monte Cristo, the Cuban and the Club are as classic to America as muscle cars and apple pie. The Reuben hails either from German immigrants in Oklahoma or New York from around 100 years ago, but the important thing is it hails your tastebuds. 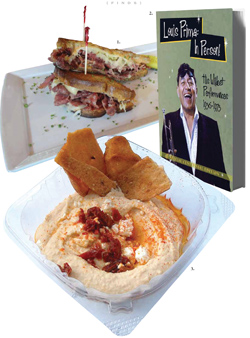 VILLAGE CHOICE
Sandwiches like the Monte Cristo, the Cuban and the Club are as classic to America as muscle cars and apple pie. The Reuben hails either from German immigrants in Oklahoma or New York from around 100 years ago, but the important thing is it hails your tastebuds. The Village Reuben at Village Café sticks to that original recipe of thin slices of corned beef wrapped and stacked with Swiss cheese, sauerkraut and dashed with a house-made thousand island dressing then grilled to a buttery brown finish on rye bread. It's served with a sweet, sour and spicy pickle spear. Try it out and you'll want to wave the American flag. $8. - Anna Purdy

PRIMO PRIMA
Band leader and ball of energy Louis Prima blazed a path across American popular music for much of the 20th century, celebrating his Sicilian roots and New Orleans upbringing during the slapdash transit. As the two-hour DVD Louis Prima: In Person! demonstrates, the trumpeter/vocalist was also adaptable, beginning his career in the '20s in a traditional New Orleans jazz ensemble, fronting a swing combo during the next decade, a big band during the '40s, a Las Vegas act during the Happy Days and even a pop-rock band in the '60s. (We'll forgive the last iteration.) Louis Prima: In Person! collects rare broadcast performances by Prima from the mid-'30s through the mid-'70s, offering vintage footage from appearances on series and specials hosted by Doris Day, Bob Hope, Dinah Shore and, of course, Ed Sullivan. Even as Prima moved around the country and through the decades, his raspy, Satchmo-style voice, scatting, trumpet playing and especially his exuberant joie de vivre served as mile posts pointing back to the Big Easy. Get it for $11.50 at amazon.com. - Walter Pierce

HUMMUS ALONG
Leave the tinned beans to the hobos in Depression-era books and movies - the garbanzo beans used to make the hummus at Cattycakes (1116F Coolidge Blvd. in the Oil Center) are soaked and freshly cooked by owner Catherine Robichaux, who is also a registered dietician. This makes for one of the best - and healthiest - hummus plates in town, and you can nab it to go; it's all ready in the cooler when you walk in. Ask for a side of pita chips and be blown away by how creamy it is, with a dash of sweetly tart sundried tomatoes and sharp feta. Not a bad idea to ask for the frozen coffee on a summer like this, either. Hummus is $4.50 for a small to-go container or $18 for a quart, and you just might want that much. - AP