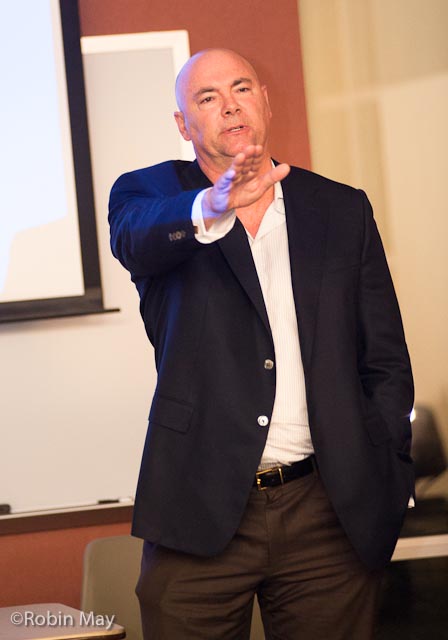 [A Note to Our Readers: The following story and commentary appeared online at theind.com on Thursday, July 14, in response to developer Glenn Stewart's bizarre attack against The Independent and our co-publisher, Cherry Fisher May. Since then, Stewart's behavior has become more desperate and more erratic. He has repeatedly attempted to post to our website as well as our Facebook page comments that are misleading at the very least and, more important, untruthful. Stewart has evidently constructed the conspiracy theory that The Ind, via its publishers, is part of a commercial cabal in Lafayette headquartered in River Ranch that is bent on ensuring the failure of his Parc Lafayette development. We've taken the extraordinary step of banning Stewart from our Facebook page. For the record, the publishers of this newspaper own an 800-square-foot condo and a home in River Ranch; they have no commercial interests of any kind, though they did briefly (15 months) own a minority interest (33 percent) in a small restaurant there (in which RR developer Robert Daigle continues to hold an interest). Neither the Mays nor any member of their family, directly or indirectly, have any commercial interests in RR with anyone - retail or otherwise - as is claimed by Stewart. Glenn Stewart's behavior is irrational and, based on what we've learned of him from former friends and associates, may become more so. To our readers anticipating a take-down of Stewart in this week's issue of The Independent, we will for now let this story stand as our response, although we by no means rule out further reporting on this topic. In the meantime, click here for stories on our website that are about or that merely mention Glenn Stewart and decide for yourselves whether our coverage of him has been fair. And for a laudable example of the investigative journalism we hinted at when the following story first appeared online, please read this week's cover story, "CONVICTed."]

On Aug. 27, 2010, The Independent hosted a fundraiser called The Big Hair Do Ball & Benefit at the Acadiana Center for the Arts. Cherry Fisher May, co-publisher of The Independent, worked the event, making announcements, among other duties. During her four and a half hours at the AcA, like many who attended the event, she consumed a moderate amount of wine.

Following the event, at roughly 11:30 p.m., May, carrying a large amount of cash from the fundraiser, was escorted to her mini-van by uniformed Lafayette Police officers who had provided off-duty security for the event - officers trained to recognize signs of intoxication. Minutes later May, alone in her vehicle, willingly and voluntarily approached a sobriety checkpoint on Congress Street conducted by local law enforcement. When asked if she had anything to drink that evening, she readily replied yes, which led to a field sobriety test. Cherry Fisher May was sober, but at the advice of her civil attorney, whom police allowed her to call from the checkpoint, she declined to take a breath test, which under Louisiana law results in an automatic charge of operating under the influence.

May was taken to the Lafayette Parish Correctional Center, booked on an OWI charge, issued a misdemeanor summons and released. Her case is currently being processed in the 15th Judicial District. She still has her driver's license. She's still shuttling kids and grandkids around in that mini-van.

Within 36 hours, May's name appeared along with dozens of other persons in the daily arrest report published in The Daily Advertiser. No one at The Independent made any attempt to prevent our co-publisher's name from appearing in that arrest report. No favoritism was sought and none granted.

Yet The Advertiser chose not to publish a story on May's arrest, evidently deciding that a public figure - to the extent that Cherry Fisher May is a public figure, as opposed to a public official, which is an important distinction we'll get to in a moment - being charged with OWI didn't rise to the level of news-worthy. Nor did The Advocate, KATC or KLFY. In fact, no local media save for The Acadiana Gazette, the publisher of which has a widely known and long-standing beef with The Independent's publishers, reported the incident. The Ind followed the practice of Lafayette's legitimate news organizations, adhering to a policy that such an incident involving a public figure is not news. Like most other local news media, this newspaper has declined on several occasions to report OWI arrests of prominent people in Lafayette. Like all other news media, however, we do report such arrests when they involve a public official - someone elected to office or who presides over a public institution; someone who is tasked with allocating taxpayer money or being a steward of public resources.

Yet The Independent did not try to hide or otherwise mute news of May's arrest. In fact, comments posted to our website by anonymous readers making reference to the incident were willingly approved. (Comments do not post automatically to theind.com; rather, a member of the edit staff must first read them, approve them and manually post them.) May's legal counsel also addressed inaccuracies in some of the comments.

Fast forward to April 6, 2011. The cover story in The Independent that day by staff writer Heather Miller, "Green Acres," exposed a loophole in Louisiana's property tax laws that allows landowners to classify as "agricultural" land that is located in prime commercial and/or residential areas within municipalities. Our focus was on the city of Lafayette. Simply having a single bale of hay on a large swath of land allows for the ag status and, more important, allows these landowners to literally pay a pittance - less than $100 annually on dozens of acres - in property taxes on land that, were it rightly classified as residential, commercial or some currently non-existent transitional status, would be taxed at many thousands of dollars per year. These taxes underwrite our community's infrastructure, our roads and bridges, as well as police and fire protection. It was our position, and it remains our position today, that exploiting this ag loophole deprives our city of much-needed revenue to pay our police and firefighters, our public servants, and to maintain roads and bridges as well as construct new ones.

Although the loophole issue had been at the periphery of our news radar for some time, it began beeping emphatically when a local developer who is also a member of the Tea Party of Lafayette pointed out that the controversial Parc Lafayette commercial development on Kaliste Saloom Road - across from River Ranch in the most desirable commercial corridor in the city - sat on land classified as agricultural. Parc Lafayette's developer, Glenn Stewart, bought the 13.5-acre tract of land in 2009 from the Saloom family, paying a handsome, above-market-value sum of $7.1 million.

But here's the kicker, lifted from that April 6 cover story: "If agricultural' property like this is sold, the sale triggers a reclassification at the assessor's office. When Stewart purchased his property in January 2009, the assessor's office moved the acreage into the commercial assessment class. But Stewart, obviously keen on the open secret, simply filled out and returned to the assessor an agricultural use application used statewide that asks four questions: name, address, description (for which Stewart penciled in the name of his company, Stewart Family LLC), and whether the property is "devoted" to agriculture, horticulture, timber or marsh lands."

If he had paid commercial rates for the land after purchasing it, Stewart's tax obligation would have been more than $48,000 annually. With ag status, he was on the hook for about $42 per year. (For 2011 he will pay commercial rates.)

Since the dust was still settling from Stewart's controversial, acrimonious and ultimately failed attempt to establish a tax increment financing district for Parc Lafayette to help bankroll a luxury hotel at the site, the development became a prominent beachhead for exposing the loophole in state property tax law. Stewart's land was the first one highlighted in the story, but it wasn't the only property we looked at and reported on. In fact, in that April 6 cover story we isolated via a city map 20 such sites taking advantage of the loophole, writing at length about a few of them. The medical doctor-turned-developer's property may have been the first, but it certainly wasn't the only one, nor was it the most egregious. Since that initial reporting, this newspaper has exposed other property owners using the loophole - and others blatantly abusing it by having no ag activity at all, not even a bale of hay - in a series titled "Fair Share."
The list of ag property in Lafayette is long and we're a small staff; it will take time to work our way through it.

Stewart is not happy with our report, and he is now registering his displeasure by spending thousands of dollars to rent BASS billboards bearing Cherry Fisher May's photograph from her August 2010 booking at the correctional center. The billboard reads, "The Independent Weekly' Publisher Arrested For DWI. Why wasn't this in the Independent's Paper? Don't Support Drunk Driving In LA."

In a story published last Wednesday, Stewart told The Daily Advertiser's Claire Taylor he wanted to give The Ind "a taste of their own medicine" - a cliche he repeated in a sound bite on KATC a day later - and accused us of being hypocritical in singling out Parc Lafayette. What Stewart did not accuse this newspaper of is being inaccurate in our reporting. Because the reporting was accurate. And we stand by it.

It's important to note that organizing and presenting special events like The Big Hair Do Ball & Benefit are Cherry Fisher May's forte at The Independent. She also writes a column for our sister publication, ABiz. May is a member of this newspaper's editorial board, but she has nothing to do with our edit staff's decisions regarding news coverage or reporting.

Aside from the perverse gratification Stewart has evidently bought himself with this mean-spirited, personal and very expensive billboard campaign, the intent may have also been to create a chilling effect on investigative journalism in Lafayette. That won't be the case.