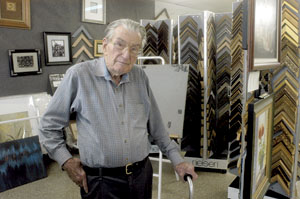 Jesse Gary is painting a Christmas greeting in bright yellow on the window of the Evangeline Paint Store. Three little cartoon birds in a holiday red and green holly nest sing "Have a Blessed Christmas." The store's owner, Albert Hartiens, sits in a folding chair inside, his cane propped up on a table, watching his old friend Gary's artwork take shape.

Behind him the shelves of the frame shop and art supply store are sparsely stocked. A dwindling supply of Conté crayon, watercolor paper, sable brushes and tubes of oil paint remain on old-fashioned wooden displays. Hartiens is closing down his shop after 43 years of supporting Lafayette artists with art supplies, framing their work and most important, helping them with his extensive knowledge about the tools of their trade.

One would think that the 88-year-old Hartiens would be ready to retire from a business that has tied him down from 9 a.m. to 4 p.m. six days a week. "I had an opportunity a couple of years ago to sell the business," he says. "I should have taken it. But I didn't because I love what I am doing. I enjoy coming here and doing the framing for people." But business has not been good; for the last several months, not enough people walked in the door to justify keeping the shop open. The doors will close some time in January, when Hartiens finishes selling the last of his inventory.

Word of the closure of the Lafayette institution rocked the art community. "I heard this morning," says art teacher and painter Lauren Daspit. "I can't stop crying thinking about him not being there." Daspit is the daughter of retired art professor and artist Fred Daspit. "I've been going there as long as I can remember. At first, as a child, with Dad. Then being able to 'charge' supplies for Dad when I first got my driver's license. Then I'd go with my kids when they were babies, and now, I send my kids there to get supplies for me."

Fred Daspit has been buying supplies from Hartiens since the store opened. "It will be a terrible loss for us," he says. "He always has that twinkle in his eye and smile on his face. Even though lately it's been rather difficult for him to keep the shop open, he's always there. You can't get the same service ' particularly the service ' or the same products at the other stores that sell art supplies. It's just not the same." At one time, Daspit restored paintings and old picture frames for decorators, using a lot of gold leaf on frames. Hartiens kept on hand gold, silver and titanium leaf for special finishes that were hard to find elsewhere.

Metal artist Ralph Goodyear, who also works with the leaf finishes, says he made a point of going to buy them from Hartiens. "Back when I first started making art, I went into his shop," remembers Goodyear. "I was just a teenager, and I wanted some gold leaf. I picked up a pack and said, 'wow,' at the price. It was a lot for a kid to buy. I know Mr. Hartiens heard me. He walked over with his pad and told me to sign it. And with that, I had an account where I could charge. He didn't have to do that. He didn't know me. But that's the way he is."

After returning to Louisiana following his service in World War II, Hartiens moved to Lafayette from Monroe in 1949 to open a Sherwin Williams store downtown. "I had taken two years of high school French, and they seemed to think that qualified me to be the manager of a store here," he says with a laugh. Lafayette was just beginning to boom. By the early 1960s, the south side of Lafayette was under development. Hartiens set up shop down the road from another Lafayette icon, Judice Inn. "Johnston Street was just a gravel two-lane back then," he recalls. "But it didn't take long until they were paving it. Progress was taking place." He was selling house paint, competing with his old employer. "I just had a wonderful business," he says. "I sold a lot of paint. But of course, eventually along came the big box stores [like Lowe's and Home Depot]. That just knocked us out."

Hartiens shifted over to selling tubes of oils and watercolors to the town's flowering artist community. And he began framing the work of his clientele. "We've done well with that ever since," he says. George Rodrigue was one of his customers. Daspit, retired UL art professor Tom Secrest and painter Vergie Banks all brought Hartiens their work.

"He is very knowledgeable about museum quality framing," says artist Tony Bernard, who works full-time for Rodrigue and created the paintings for Louisiana's 2007 and 2008 Duck Stamp. "Anything I asked him about art, he knew. And the personal side of it, having someone to interact with who knows what he's talking about ' it's real nice."

Hartiens' wife Louise, who died in 2003, was also a painter; in the late 1990s she urged her husband to open up his shop for art lessons. Artist clients became teachers, bringing in students who also became customers. "I taught there because I enjoy art and I enjoy passing it on to other people," says Bernard. "Albert Hartiens opened his doors to me. I wasn't looking to teach art. But it's helped me. While I'm teaching, I learn, too. I don't know what I'm going to do now."

Gwen Voorhies was a student of portrait painter Carl Groh, who taught at Hartiens' shop. "Louise and I took that class together," she says. "We would take the class on Wednesdays, then paint together on Saturdays. She was a wonderful woman. She's the one who encouraged me to start teaching." Voorhies has been teaching classes of adults, teens and children ever since. "Mr. Albert has been instrumental in the Lafayette art market," she says. "The lessons and workshops he organized were a service to the community."

Voorhies buys colors from Hartiens that nobody else stocks. "Asphaltum is a dark brown glaze that Rembrandt used," she says. "Blonde hair is really hard to paint. Rembrandt used asphaltum to give it depth. I didn't know about that until I started painting here," she says. "Now I can't paint without it."

The art classes will scatter. Voorhies has a studio secured at the Conservatory of Music. Some classes will return to small groups gathering in private homes. Others are still in limbo. As for Hartiens, he too is pondering his future. "I don't know what's ahead for me, or what I'm supposed to do," he says. "I guess there's no place for my type of business anymore. I find I am able to guide customers, help them with their selection, but with this new generation, they buy art supplies online. They're not interested in personal service."

Hartiens looks out the plate glass window, where Gary is cleaning his brushes after putting the finishing touches on his sign. "I've been associating with this place for 37 years," Gary says. "See this fine hair brush I do lettering with? I haven't been able to find it anywhere else."

"It's squirrel hair," says Hartiens. "From the tail of a Russian squirrel."

Gary grins. "Now where else are you going to get that personal touch?"

"Thank you from the bottom of my heart," Hartiens says to Gary, as the sign painter packs up and swings out the glass door. The hinge catches for a second, and the door closes with a sigh. Crisply outlined on the glass, the fresh painted sign reads, "Close out. 50 percent off all merchandise. Sale Sale Sale."