A Delta chef turns Southern cuisine on its head, and writes a couple of books along the way. By Anna Purdy

Ask Martha Hall Foose which of her experiences made her a chef of note - and the highest honor: a favorite of other chefs - and it isn't her James Beard Award, her culinary studies in France or even her travels. It's growing up on the Mississippi Delta.

A Delta chef turns Southern cuisine on its head, and writes a couple of books along the way. By Anna Purdy 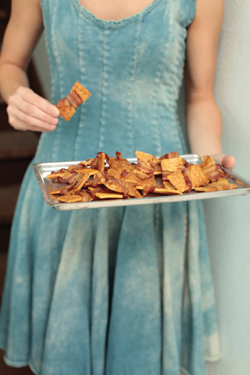 Ask Martha Hall Foose which of her experiences made her a chef of note - and the highest honor: a favorite of other chefs - and it isn't her James Beard Award, her culinary studies in France or even her travels. It's growing up on the Mississippi Delta. 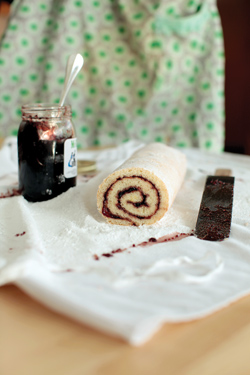 Big Blackberry Jelly Roll - Long and Short of It
This cake does not take long to bake, yet it looks
as if you have gone to a lot of trouble, an
impression I like to give. Purchased blackberry
jam makes short work of the filling.
SERVES 8 TO 10
Nonstick cooking spray
¾ cup unbleached all-purpose flour, plus more
for the pan
4 large eggs
¾ teaspoon baking powder
¼ teaspoon salt
¾ cup granulated sugar
Confectioner's sugar
1 cup blackberry jam

Heat the oven to 400°F. Grease a 15 x 10 x 1-inch
jelly-roll pan with nonstick spray and line it with
parchment paper. Grease again and flour the paper.
In a large bowl, beat the eggs, baking powder, and
salt with an electric mixer on high speed until foamy.
Gradually add the granulated sugar, beating until the
mixture is thick and lemon colored. Fold in the flour
with a rubber spatula and spread the batter into the
prepared pan using an offset spatula. Bake for 10 to
12 minutes or until golden.
Sift confectioner's sugar into a 15 x 10-inch rectangle
on a clean dish towel. When the cake is done,
immediately loosen the sides of the cake and turn it
out onto the sugar. Peel off the paper. Starting at the
narrow end, roll up the cake and towel together.
Transfer to a wire rack, seam side down, and let cool
for about 10 minutes.
Very carefully unroll the cake and remove the towel.
Spread the cake with the jam and re-roll. Transfer to
a serving plate, seam side down, slice and serve.

Foose's just-released second book, A Southerly Course: Recipes and Stories from Close to Home, strikes a balance between Southern cooking and the exotic - coffee molasses, blackberries and caramel, a chocolate cake with a honey ganache - keeping her feet firmly planted in Delta soil while peering outward and around the globe for more exotic possibilities. A Southerly Course follows the pattern set in her Beard Award-winning first effort, Screen Doors and Sweet Tea, released in 2008.

"It took me 40 years to write it," she jokes of Screen Doors. "When I was working on Screen Doors I realized people think that in the South all we do is sit around swattin', scratchin' and fannin'." So Foose worked on a variety of recipes, not just standard Southern fare but foods and combinations that reminded her of places and people she loved. Before each of Foose's recipes she writes a vignette in a warm, winking fashion - think Eudora Welty at the Algonquian Club - and tells the reader more about why this recipe is included. "I felt like I really needed to give the recipes context. If you want a recipe you can have 100,000 in a nanosecond online, so I'm giving the food some context about what's it about, why it's important to me. Sometimes I want to tell a story about a place and I develop a recipe around the story I want to write."

Foose was raised in Mississippi and spent her formative years working in restaurants where her propensity for baking first reared its head. Following that urge she went to bakeries in Aspen, Colo., and La Brea, Calif. Knowing that a formal education from a formidable culinary school would earn her not only knowledge but ducats, Foose, the Delta-hearted girl, packed her bags for France to study at Ecole Notre. "Two of my mentors had gone there," she says, so it was an easy choice. After spending a few years learning the craft and probably wearing black and sipping espresso, she came back to the states and headed home, opening the now legendary Bottletree Bakery in Oxford, Miss.

Famous for not only the pastries and bagels and sweet delicacies, baked fresh and selling out daily, Bottletree also had a tremendous coffee selection that came in clear mugs so the art of the crema could literally show through.

After several years she sold it, keeping the head baker by marrying him, and headed a few ticks west to New Orleans. Here she went to work for acclaimed chef Susan Spicer. "I was the pastry chef at Bayona for a short time. I love Susan. One of the things that's really been great in the years I've worked in restaurants is primarily I've worked with women chefs, so I think that's been really wonderful to have such great people to work under. Especially back in even the late '90s it was still predominantly male kitchens, so that was wonderful to work for those bad-ass women."

Foose returns to Louisiana in A Southerly Course, recounting the story of visiting her friend's grandmother, Beauxma, in St. Martinville as a young teenager. It's tied to a recipe that involves sweet potatoes and sugar cane skewers, folding in the legend of the Evangeline Oak.

Since the Beard Award, Foose has found her footing in the world of celebrity chefs, consulting on other people's cookbooks and even working behind the scenes in Hollywood in movies like The Help. "I just met today with a producer about doing food research for a film project," she says. "They just passed all these tax incentives stuff in Mississippi so we can compete with Louisiana. I'm doing research about period foods in the South."

Next up for Foose are more road trips with her 8-year-old, Joe, and book signings around the South, plus movie consulting and advising other chefs.

But Martha Hall Foose plans on taking a little break, and getting back to her twin passions. "Reading and eating," she confesses. "If I could just spend my days doing that, I would."