With an unexpected donation of a new facility, Acadiana C.A.R.E.S. hopes to be the anchor of a social services center. 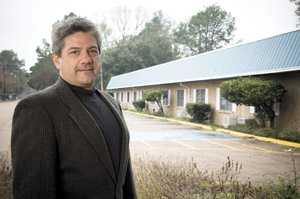 Last January, life was looking bleak for some of Acadiana's most at-risk residents. Hope House, a residential facility built by Acadiana Concern for AIDS Relief, Education and Support to house those suffering from HIV/AIDS, was shut down because of a lease dispute between Acadiana C.A.R.E.S. and landlord Roselawn Properties. The homeless clients of C.A.R.E.S. who had been living in the communal setting in downtown Lafayette were scattered into individual apartments across the city, far away from the education, medical attention and emotional support that Hope House offered.

This month, C.A.R.E.S. received the donation of a facility that encompasses more than 70,000 square feet on five acres in north Lafayette. "We went from being thrown out on the street to being handed this huge donation," says C.A.R.E.S. Director Claude Martin. "The irony of what we went through in one year's time is mind boggling."

"We could have sold it," Wright says. The empty facility is in the process of being appraised ' and will be valued in the neighborhood of $3.5 million, according to Wright. The decision to make the donation is a combination of good business ' being able to claim a charitable donation on taxes, and doing something positive for the community. "We asked ourselves what is the highest and best use of this facility," Wright says. "And we thought it might work as a shelter."

Wright called his niece, Kimberly James, executive director of Lafayette Catholic Service Centers. Catholic Services runs St. Joseph's Diner, St. Joseph's Shelter for Men, and the New Life Center in Opelousas, among other services which provide emergency assistance with rent, utilities, food, clothing, medicine, shelter, furnishings, medical and dental care. James had just started construction on a shelter at 427 St. John St. to house homeless veterans and didn't feel that her organization could undertake the renovations necessary on the huge nursing home. "It was too much for us," James says. "We felt that C.A.R.E.S. was the best fit. I think very highly of Claude."

Says Wright, "Kimberly hooked me up with Claude. We thought Acadiana C.A.R.E.S. was a worthwhile organization that had a great need, and we had a way to resolve it." By making the donation to C.A.R.E.S., Wright says "we could be assured that what happened last year would never happen again."

Lafayette Guest House and Oceans Behavior Healthcare were located in separate buildings on the same campus. When CCI signed over the building, they also donated Ocean's remaining two-and-a-half year lease to C.A.R.E.S., with the intention that the income could help with renovations and maintenance. Oceans subsequently moved out, leaving their building vacant. Oceans is debating whether to buy out their lease or find a sublessor to occupy the building for the remaining term of their lease. Either action gives C.A.R.E.S. working income.

In C.A.R.E.S' first phase of its expansion, it will relocate its residential programs for HIV/AIDS victims and disabled individuals to the site. Thirty of the nursing home rooms will be renovated into 15 apartments, each with a bedroom, bath, kitchenette, living and dining area. This will triple C.A.R.E.S.' permanent residential capacity and allow all its clients to live in one facility. Following in January 2008, C.A.R.E.S. will relocate its counseling offices, food bank, community meeting spaces and administrative offices. C.A.R.E.S. will vacate its downtown location by March 2008.

Martin envisions a facility that goes beyond the mission of C.A.R.E.S. To that end, he has assembled a task force made up of members of the Acadiana Regional Coalition for Homelessness, in conjunction with his new neighbors in the Truman area, to brainstorm how the facility can best serve the disadvantaged. "We're in the early stages of talking to other agencies who want to be under the same roof," he says. "All of us in social agencies working with these populations want to put this together."

C.A.R.E.S. has long sought to develop a daycare program that will provide childcare services to low- and moderate-income families. The new facility has room for educational programs and green space for playgrounds. Another goal is to build a substance abuse treatment program starting in 2008, which will include in-house 28-day treatment, followed by release to a halfway house, which will be housed at the facility in the future.

Meanwhile, James, who has been in discussion with the Veterans Administration to build more housing for homeless veterans, saw an opportunity to partner with C.A.R.E.S. Lafayette Catholic Service Centers is building a shelter which will offer two-year housing for 12 disabled veterans. In the next year, they hope to expand and shelter a total of 16 vets. Even with that increase, the VA is requesting more beds in this area. James and Martin are considering the possibility of using some of C.A.R.E.S.' new real estate to house homeless veterans, who could then benefit from Housing and Urban Development programs for the chronically homeless run by C.A.R.E.S.

Martin is also reaching out to the architects, designers and benefactors who helped build and furnish Hope House's original location. "I've already had phone calls offering help," he says. "The community is already responding."