As You Like It is being performed at Acadiana Center for the Arts this weekend and next with a cast entirely composed of people who don't know or understand life before the Internet. 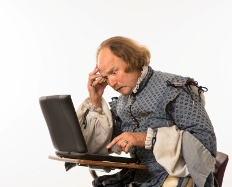 The Summer Youth Shakespeare Ensemble at Acadiana Center for the Arts is a performing arts camp run by the Acting Up! company for the last 10 years. The kids' camp is likened to a language immersion camp, meaning that the kids come in and begin learning Shakespeare right away, learning about Elizabethan history as it pertains to the writing of the play as well as learning how to understand and perform Shakespeare. They take part in costuming, set design and learn music and dance. After only two weeks, the kids have it memorized and are ready to do public performances. Every year it is a different Shakespeare play.

As You Like It follows the protagonist Rosalind. Her father is a duke and is banished from the kingdom by his self-serving brother. When Rosalind is banished too she changes her appearance and masquerades as a boy named Ganymede, but not before falling in love with Orlando, the disinherited son of one of Rosalind's father's friends. Rosalind in her disguise takes off for the Forest of Arden accompanied by her cousin Celia and the court jester Touchstone to find her father, who is hiding there with his own group of friends. In the final act of the play Rosalind, now out of disguise, marries Orlando and several other weddings occur simultaneously, and her father is out of exile and allowed to rule once more. The play touches on themes of love, death, the meaning of life and the natural world. The famous lines, "All the world's a stage/And all the men and women merely players" are from Act II, Scene 7 of As You Like It.

On Friday we'll post a video of various activities at the camp as the students ramp up for the performance.