The issue of private property in the rebuilding process is shaping up to be an explosive debate. 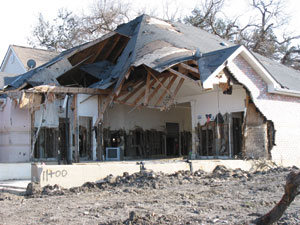 Even though his home in Algiers Point survived most of the brutality unleashed by Hurricane Katrina, Mark McCarthy can't get the threat of urban land loss out of his mind. He seriously doubts the federal government would want to take his property for levee construction or economic development purposes, but crazier things have happened in New Orleans, especially lately.

"It would have to be an astronomical sum of money," McCarthy says of selling out to the feds.

But it's a different story for his aging grandmother, who very well may face a buyout, or another form of property seizure, in the near future. Her home is just 100 yards from the London Avenue Canal breach. McCarthy says she's gradually accepting what may be a brutal reality.

"My grandmother is willing to take what she can get and walk away from it," he says. "It's just too hard for her."

Residents' feelings are mixed on the issue, and confusion has taken hold as details remain scarce. And in coffee shops, congressional hearings, dining rooms and every other imaginable space one question keeps resurfacing: How will Louisiana rebuild?

Aside from levee and coastal restoration costs, private property rights are shaping up as one of the most explosive issues in post-Katrina America.

Some private land ' no one knows how much ' undoubtedly will need to be taken by the government for any long-term plan to progress. Will it be done with or without the property owner's consent? And if it's done with their consent, how will values be determined?

The outcome will impact the livelihoods of thousands ' and the livability of large communities. It also could set a national precedent for how future land expropriations are handled. "This will be the sticking point of the entire debate because you are talking about peoples' property and peoples' money," says Barry Erwin, president of the Council for a Better Louisiana, a Baton Rouge-based think tank. "And we're only talking conceptually on these issues right now. Nobody is getting any answers, and when they do, they probably won't like it."

The U.S. Army Corps of Engineers is the government entity stirring the pot at the moment. They reportedly want to obtain huge swaths of land ' some pieces spanning more than 150 feet ' along the 17th Street and London Avenue canals for levee improvements. In Plaquemines Parish, the feds are considering seizing portions of land from 250 property owners to widen the Mississippi River.

Such takings are not supposed to be government grift. Initial reports suggest ' and the Fifth Amendment to the U.S. Constitution requires ' that property owners will be compensated justly. However, details of any compensation plans have yet to surface. Meanwhile, some parish officials are going public with their fears and expressing concern that purchase prices could drop below pre-Katrina fair market value.

Rachelle Levitt, executive vice president for policy and practice at the Urban Land Institute, a Washington-based nonprofit that researches emerging land use trends, says her group has heard the concerns and is responding with plans and suggestions. She says there needs to be a conscious effort to ensure that all homeowners are compensated at pre-Katrina values ' whether the selling pressure comes from a legislatively-formed corporation, or the government itself.

"There should be some rationalization to that part of the process," she says, admitting there's no way to tell how the payment options will play out. Another widespread concern is that values will be pegged to assessments calculated by Louisiana's elected parish assessors ' especially in New Orleans, where most homes are grossly undervalued.

A more immediate threat to property owners may be the concept of eminent domain ' the flavor of the month for legal and political junkies, thanks to a recent U.S. Supreme Court ruling and the onslaught of reactive legislation. Eminent domain is the legal doctrine that allows governments to take private property for certain public uses that are supposed to serve the greater public good. According to the recent High Court decision, those uses can include economic development that ultimately will yield higher property taxes. While many Americans view that court decision with disdain, it's hard to argue that flood protection for an entire region does not qualify as a legitimate, even overriding, public interest that ought to trump individual property owners' interests.

Of course, it's a lot different when it's your property. It's even more dicey when the "public interest" is infused with private gain.

While eminent domain is routinely used to help build highways and public buildings, it also has been invoked to transfer property to a private owner operating in cahoots with the government. Currently, in Riviera Beach, Fla., the local government is preparing to force nearly 350 property owners and more than 1,000 renters to sell out to a private yacht development because of "blighted" conditions.

While nothing like that is in the works locally ' at least not on the surface ' Gov. Kathleen Blanco told a congressional committee recently that a number of private developers have contacted the state about assisting with the restoration process. That raises fears not only of eminent domain but also of gentrification ' forcing poor folks out so that the silk suits can move in.

State Rep. Mickey Frith, an Abbeville Democrat and chairman of the Acadiana delegation, says it's better to be safe than sorry. He plans to file a bill next year to limit local governments, or state-sponsored corporations, from seizing private property for economic development. "If you are looking to improve infrastructure, that's one thing," says Frith. "But I don't think we ought to be making a land grab just to build a super store or something."

Concerns about eminent domain and how it might be invoked locally also have surfaced at the federal level. A clause allowing it was initially included in landmark home mortgage assistance legislation by Baton Rouge Republican Congressman Richard Baker, but that language was quickly pulled in response to widespread objections in south Louisiana. The bill would establish a special corporation to buy distressed ' and often underinsured ' properties from willing sellers in an attempt to stabilize the local housing market and prevent widespread foreclosures. The bill was racing against the clock last week during Congress' final days before Christmas.

Closer to home, another urban land-loss threat springs from Mayor Ray Nagin's Bring New Orleans Back Commission, which has been working with the Urban Land Institute to draft a citywide rebuilding plan. An initial draft of ULI's plan would halt developments in flood-prone areas and replace them with wetlands, parks and inner-city levees to reduce flooding of remaining neighborhoods and create a buffer for surges. Here again, it's all a matter of perspective: Whose property gets sacrificed for the greater public good?

All of these ideas could translate into lost property for some, but for others it could mean losing or preserving a way of life, McCarthy says. Such factors may or may not affect market values or buyout options or congressional intent.

"I think there will be a lot of disappointed landowners who will want to return, but can't," he says. "But we're a determined people down here, and we'll find a way to make it."