A national recession and high gas prices haven't stopped consumers from enjoying their weekends on the road.

A national recession and high gas prices haven't stopped consumers from enjoying their weekends on the road. 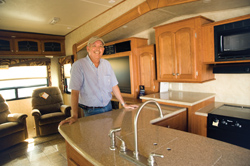 While we still find ourselves in the midst of a recession, it may shock you to discover that one more local industry can report an increase in sales over the last three years - the RV business. As a luxury item, and with the price of fuel still on the high end, it comes as a bit of a surprise that the sales of RVs have actually increased over a period when most people are cutting back on discretionary expenses.

So what gives? As noted by Jim Gauthier, of Gauthier's RV, several factors can be attributed to the recent uptick in sales.

"Part of it has to do with a better, more stable oil and gas industryas the oil industry gets better, everything else will." Gauthier's business has evolved over the past 30 years, to the point that he now only sells travel trailers. "We are strictly on the towable side, which is a little more recession proof because people tend to keep going camping with a travel trailer because they have a truck they're driving every day that they pull it with." Whereas the high price of fuel will cause an owner to keep his motor home parked, families with travel trailers are more likely to keep traveling. Because of the lower costs overall, the market is considerably larger for travel trailers than motor homes.

Additionally, Gauthier notes that financing is more accessible than it was a year ago, allowing more families to get into their first (or next) trailers. "Financing has been an issue but it's gotten a little better," Gauthier says. "For a while there it was hard to get people financed again, they had really tightened up the requirements to get somebody financed, and now they've loosened those requirements a bit, so that makes it easier to get people financed."

Larry Besse, sales manager at Southern RV Supercenter (formerly Stephen's RVs) agrees with Gauthier, stating that "financing is getting easier and more available than it was in previous years."

Nationally, these factors have contributed to record-breaking levels of RV ownership. More and more people are recognizing this lifestyle as a more affordable way to travel. Lafayette has always had a strong RV market, Gauthier says, "and as long as we don't have a big bust in the oil field, we're probably going to keep doing good locally. When the oil field and economy is good here, we'll do better here than they do nationwide."

In Elkhart, Ind., where the majority of RVs are manufactured, the unemployment rate remains ridiculously high, about 20 percent, but RV demand is creating new jobs. The employment rate increased by 5.2 percent compared to the national average of .9 percent from December 2009-2010, credited mainly to the spike in RV sales since the beginning of 2010.

Besse and Gauthier both agree their businesses have steadily improved over that time period. At Southern RV Supercenter, Besse claims sales in June 2011 were higher than in June 2010, and "we're on pace this month to surpass sales from July 2010 as well." Down the road at Gauthier's RV, Gauthier explains, "From January this year to same period last year, we're probably up 20 percent. And last year over the previous year, we were probably up 10 percent." While Gauthier hesitates to label this upward trend a "boom," he does acknowledge that "sales are up, which is good because the last two years had been fairly flat in terms of bottom line profitand this year, we've seen an upswing, but it's still not where it was [pre-recession]." Nevertheless, both businesses have expanded over the last year, with Gauthier's hiring two new employees and Southern RV hiring five.

To both Gauthier and Besse, a key to their success is the public recognizes RVs as an affordable way to travel and spend time with their families: A family could spend several thousand dollars on a single trip to the beach or out of the country, but that same money can be put toward a down payment on an RV and allow that family to take many trips in a given year. "They can take a vacation once every six months, or they can take that same money and go out every weekend," Gauthier notes.

Stephanie and Lee Venable of Cajun Palms, located just off the Henderson/Cecilia exit

With destinations like Cajun Palms only minutes down the road, locals are opening their eyes to this alluring possibility. "There are lots of places around here within an hour or so to do stuff," Gauthier says. Just off the Henderson/Cecilia exit, locals flock to the Cajun Palms RV Resort, which opened four summers ago. General Manager Amanda Stelly says they've already doubled their capacity. "We've gone from 187 sites to 324 this year, and we're filling it up every weekend, mostly with locals from Lafayette or just down the road." With amenities like three water park-style pools, a swim-up tiki bar, concessions stands, a putt-putt course, and a fully stocked fishing pond, the resort boasts 40 acres of facilities and countless activities for all ages. On the weekends, Stelly says they have live music from various local bands.

Having destinations like this so close to home helps offset some of the costs for travelers while also strengthening the local economy. "When fuel prices go up, you're not gonna go as far or go as often," Gauthier explains, "so that helps local people like Cajun Palms." Residents of Lafayette do not have to travel far to take advantage of our state's wide variety of outdoor activities. For consumers who still wish to travel in our down economy, RVs are becoming a preferred and economical means for spending time with family and friends, a fact that will likely contribute to continued growth for all facets of the local RV industry.