STM aims to arm students with the best technological tools for 21st century learning - and kicks the initiative up a notch with a student-run help desk.

STM aims to arm students with the best technological tools for 21st century learning - and kicks the initiative up a notch with a student-run help desk. 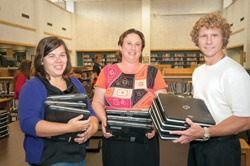 For those who can still remember getting their first Big Chief tablet with its widely spaced lines in grade school (you'll have to go to eBay to get one today), this news is going to make you feel archaic. Starting this fall, St. Thomas More Catholic High School will join the growing number of schools across the state and country implementing a mandatory tablet computer program for its students. And, like only one other known school in the nation, it will also offer a student-run help desk.

"Now the kids have the world in their hands," says Audrey Menard, principal of STM. "I'm a big, big proponent of 21st century education. The laptops are really just a tool. It's just like a pencil, but we take it to the next level. Without the laptops, we're stuck with textbooks and that's the curriculum; they're often out of date."

Much like STM's one-to-one student tablet initiative, K-12 schools across the country are providing every staff member, teacher and student with a portable laptop, notebook or tablet PC for continuous use both in the classroom and at home. As best ABiz could determine, STM is the first high school in Lafayette to implement such a program.

The tablets themselves are the extraordinarily sturdy Fujitsu Lifebook series, and they will feature extensive educational software including Moodle, DyKnow and even Skype.

"The kids are all iPhoning and texting so it's really part of their language," she says. "It just brings a world-class level of education to the school."

Each student will be given a tablet computer when they start the school year and will keep it until he or she graduates. While the school owns the computers, parents are the ones paying for them, chipping in an extra $500 a year in freshman tuition to purchase the laptop for the four years their child will attend the school.

"We found a private grant that paid for the majority of the initial expense of the program, and then the parents subsidized it to keep it ongoing through the tuition," says Jimmy Mallia, president of STM's advisory council. "What the grants actually paid for was there was a significant amount of infrastructure and rewiring that has to happen because you have to get the whole campus wireless, and you have to be able to have the whole capacity coming in from the city to support the project."

In order to install that infrastructure, STM is working with Cisco Systems to build the most state-of-the-art infrastructure system in the nation and make it the model school for such high velocity infrastructure, according to Menard. STM has also partnered with LUS to have a 1,000 GB pipe coming in through the school.

Both Menard and Mallia swear by their chosen tablet's near indestructibility and say part of that $500 price tag buys basic insurance. However, bad things do happen to good computers. Especially viruses. Because of that threat, additional insurance can be purchased.

And if students are unfortunate enough to download a virus, they need only drop by STM's convenient, student-run help desk where they will be given a loaner laptop (which are always available) while their fellow classmates fix the computer for them.

According to Menard, there are a lot of wrong ways to do a one-to-one tablet program, like when schools give each grade level a different model of computer or allowing students to bring whatever computers they want. She says these approaches rarely work, but giving students a single model of computer will help with solidarity in how the school dispenses instruction.

"And, as far as responsibility goes, because we own them we can oversee the kids," she adds. "We have free range to go in and block them out of things so we can really make sure that they are responsibly using them."

That means STM students needn't fear that they will be blocked from their beloved Facebook accounts while using their new tablets.

"Schools are more like a museum these days than they are like something that represents today's reality," says Menard. "So I'm just trying to give our St. Thomas More students an advantage and really prepare them for where they go next."